The Parliament met from July 17 to August 11, 2017. The election of the president and vice-president of India took place during this session. The new vice-president, M Venkaiah Naidu, presided over the Rajya Sabha on the last day. This session also saw the retirement of a few members, and arrival of some. The parliament also lost the wisdom of Mayavati, who resigned from Rajya Sabha after her speech on violence against dalits was cut short by the chair and objected by ruling party, and Sitaram Yechury, who completed his term and did not seek reelection.

At a glance…
Both Rajya Sabha and Lok Sabha had 19 sittings. While the Rajya Sabha worked for 80 hours, the Lok Sabha deliberated for 76 hours and 41 minutes. Lok Sabha passed 14 government bills as compared to Rajya Sabha, which passed nine. No new bill except the Motor Vehicles Act was referred to the departmental standing committees. Likewise, a Joint Parliamentary Committee was formed of both the houses to deliberate on the Amendment Bill of the Financial Resolution and Deposit Insurance Bill.

Legislative business in the Parliament
PRS in the vital statics has pointed out that Lok Sabha is debating more on legislative matters. According to their analysis, 68 per cent of the bills passed have been discussed for over two hours. They also analysed that the bills which were discussed less than 30 minutes have fallen from 26 per cent in the last session to 4 per cent in the current session. However, this has to be seen in the context of the dominance of the ruling party, which is leading to the referring of a lesser number of bills to the departmental standing committees for thorough evaluation. The standing committees are vital for the policy formulation as they provide the space for the members to examine the bill in detail and take expert opinion on the subject.

In the ensuing debate on the bill, many lawmakers raised the questions related to the crisis of bad loans. Almost 90% of the Non-Performing Assets (NPAs) is with the public sector banks where government being a majority stakeholder can initiate strict action. The issue raised was related to the role of the Reserve Bank. The opposition argued that RBI, being the regulator is responsible formulating policies for ensuring stability in the system. They emphasised that the banks must be allowed to take the business related decision and recover in case of loan default. However, there was unanimity on the actions needed to reduce the NPAs.

The Financial Resolution And Deposit Insurance Bill (FRDI)
The FRDI bill was introduced in the Parliament on August 10, just a day before the Parliament session came to an end. According to the members of parliament who spoke, before the introduction of the bill in the Lok Sabha, the draft was not circulated among the members to study and give their response.

The bill was referred to a Joint Parliamentary Committee (JPC) of the parliament consisting of 30 members with a mandate to report back in the first week of the next session. Some members of the opposition questioned the move to send the bill to a joint committee rather than the standing committee on finance. JPCs are formed when there is no consensus within the parliament. Veerapa Moily, the chairman of the standing committee of finance, has protested this move by saying that the decision to form JPC circumvents, supersedes and bypasses the Standing committee system.

The Banking Unions have also condemned the move to introduce this bill and have stated that the legislation will lead to an overnight closure of banks and impelling doom for depositors and bank employees.

The Bill brings in an important formulation of financing of IIITs through PPP in which the contribution of the center will be 50 per cent, states 35 per cent along with 50-100 acres of land free of cost, and enabling physical infrastructures such as water, electricity and road connectivity; and the contribution of the private parties will be 15 per cent.

MPs questioned the financing model, and the governance structure of the IIITs where the states are underrepresented and industrial partners get to actively participate in the governance and creation of the curriculum. The Bill does not prescribe a fee structure, which is left to the institutes to decide. The MPs also raised questions about the reservation policy. The government clarified that all the institutes of national importance would adhere to the national policy on reservations.

The Act is important as it defines the financing through public, private partnership in a way that the public money is being put for capital expenditure and private parties get the governing role with minimum investment.

Conclusion
The Parliament continues to be a vibrant space where a lot of discussions are happening on various issues faced by the people and the policy and priorities of the government. There is a good amount of hope as the different political parties have an upper hand in the different wings of the Parliament. However, as we have seen this time, there is a tendency in the government to undermine existing mechanisms including Departmental Standing committees.
The FRDI Bill was referred to the JPC instead of the standing committee on finance headed by a member of the opposition. New legislations are not being referred to the standing committee for a thorough reading and expert opinions.

Though a large number of questions were raised in the parliament, going through the answers indicate that the government are deflecting from them by answering vaguely.

The Narmada question was raised a couple of times in this session as people were fighting the ensuing submergence with the dam walls built to the full height of 132 meters. The rehabilitation, however, continues to be very dismal with more than 142 villages under the submergence zone still to be rehabilitated. The demand for stopping the Parliament and discussing the issue was turned down by the chair. However, it was raised many times. It would have been a tribute to the nonviolent struggle if the Parliament had chosen to discuss the problem of displacement, rehabilitation and sustainable development in this context.

The discussions in the parliament were more skewed towards what is happening at that time. Consequently, issues related to long-term policy were not discussed. This time there was a discussion on foreign policy after a long time. However, the issues related to the trade and international finance continues to be in oblivion. Even when the 19th Regional Comprehensive Economic Partnership (RCEP) Trade Negotiating Committee was meeting in India during the Parliament session, there was no discussion in the Parliament. This is despite the fact that the farmers, trade unions, civil society activists are opposing RCEP’s opaque negotiations with no oversight from the Parliament. The civil society statement of RCEP demanded that India should adopt a law that no international trade agreement should come into force without ratification by the Parliament. The lack of Parliament’s oversight over investments from abroad and trade treaties continue to be a major lacuna of the Indian system. 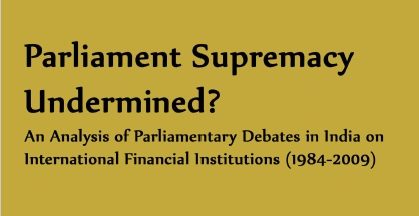