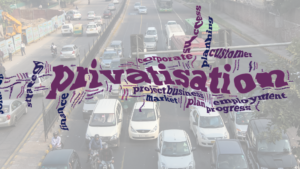 In pursuance of its policy of monetisation of national assets, the government earlier this month approved the setting up of the National Land Monetisation Corporation (NLMC). It would be a government-owned company with the express purpose of monetising “surplus land” of other government-owned companies and agencies. It would be under the administrative jurisdiction of the Finance Ministry with an initial authorised share capital of Rs 5,000 crore and a paid-up share capital of Rs 150 crore. The government in its selling spree seeks to hand over to private players prime land in the name of generating revenue. The central trade unions have condemned this move, saying that these land assets could very well have been utilised for expansion and modernisation of the PSUs they belonged to that have not only been adding substantially to the national exchequer but are also crucial in enhancing the state capacity to cater to the interests of the people. “But a Govt married with the notorious philosophy to privatise the state-owned undertakings in entirety in favour of their corporate masters is not expected to be committed to such basic economic prudence,” said Tapan Sen of CITU. It is disconcerting to see the government behaving more like a real estate agent, and the central trade unions protested against it during the two-day General Strike on 28th and 29th March. This apart, it also seems that the NLMC would be stepping over the shoes of DIPAM that has overlapping roles.

In her 2021 budget speech, the Finance Minister announced the government’s intent to privatise two Public Sector Banks apart from IDBI. Faced with massive strikes from the bank unions and given the upcoming elections, Nirmala Sitharaman avoided any mention of it in her budget speech this year. But with the election season coming to an end, the moves towards privatisation have gathered steam again. The two banks being targeted seem to be Indian Overseas Bank and the Central Bank of India, while the government is also assessing investor interest in the privatisation of IDBI. The Finance Ministry is reported to seek cabinet approval to amend the Banking Regulation Act, 1949 soon. One of the changes being considered is the removal of the 20% cap on foreign investment in PSBs in these two cases. And the other could be a more lucrative voluntary retirement scheme to facilitate the layoffs that such a move would bring. The bank unions joined the General Strike on March 28th and 29th against these moves that are against the interest of the ordinary people, their savings and are aimed at fundamentally overhauling the character of public sector banks. The social obligations of PSBs would now be replaced with a singular motive of profit.

Financial Accountability Network, along with nearly 40 organisations, unions, civil society organisations, networks and individuals, had responded to the SEBI consultation paper on ERP ratings. The critique called out the new proposal for regulating ERPs by questioning the new ESG framework that makes it more convenient for companies to greenwash their investments. The proposal does not intend to create a standard methodology or define the criteria based on which the ERPs can assess the companies. There is a serious need to question the framework itself rather than accept it as given and create regulations based on the current framework.

You can read the response here.

The conflict in Ukraine and the humanitarian and economic crisis precipitated by the war is a matter of grave concern globally. The belligerent Russian invasion has triggered wide-ranging economic sanctions from the West in its bid to weaken Russia. Fully aware of the consequences of putting boots on the ground in terms of escalating the conflict on a global scale, the US and Western Europe are relying on what they call unprecedented sanctions. Ripples of the war and these subsequent developments, in the form of the surge in oil prices, have been felt across the world that has hardly recovered from the effects of the pandemic. While the world is hoping for de-escalation, the devastation caused already and what awaits has put a shroud of uncertainty around the global economy including that of India. With the war and the US ban on Russian oil (Russia being the second-largest producer), crude oil prices that were less than $70/barrel in December, have more than doubled crossing $140. With crude oil accounting for as much as 20% of our import bill, this forebodes high and lasting inflation. In India, with people already struggling with rising inflation since last year, this means further cuts on their purchasing power. This only adds to one of the biggest concerns that even the Economic Survey could not hide – the abysmally dwindling demand. The war has also triggered a panic sell-off by foreign portfolio investors, thereby hitting the Rupee. While a lot is still to unfold, there are murmurs of “stagflation” gaining ground in certain corners, i.e., a state of the economy characterised by a paradox of low demand and high prices.

The nefarious nexus of political clout and private capital is on display again in the murky sale of Central Electronics Ltd. While the decision to sell a profitable public sector unit with strategic significance for the defence was already called into question, the valuation of the company was also appalling as the government valued it at 44% of its land value and 20% of equity valuation. But what was exposed hereafter has only raised more questions regarding the manner in which public assets are being sold to benefit those close to power. Not only did the two bidders in the sale know each other, but also the one (Nandal Finance and Leasing) is owned (99.96%) by Premier Furniture and Interiors which in fact is owned by two brothers, Pradeep Kumar Gupta and Yatendra Kumar Gupta who also run the Sharda University. It has been reported that the two brothers have close ties with the BJP. They are close to Naveen Jain, the current mayor of Agra, promoter of infrastructure company PNC Infratech, and a co-treasurer of the BJP.

GST compensation yet to be released to the states for the current fiscal ending March is ₹53,661 crores, said the Finance Minister this month. This while the GST compensations are scheduled to end this June. Several states have in fact, been demanding its extension for another five years.  Chhattisgarh CM has recently written to his counterparts in 17 states to demand the extension of GST compensation. He said that the autonomy of states on tax policy has been eroded owing to the GST regime and without the extension, it would not be possible to meet the costs of public welfare and development. So the demand is until the states recover from the pandemic and until the purported benefits of GST are realized for real, the compensation be extended. The ruling party, while failing to pay the states its dues, however, has already expressed its displeasure about such a demand.

It seems the media has already turned the page over the biggest bank fraud case in the country’s history. Mr Agarwal of ABG Shipyard is accused of loan fraud amounting to Rs. 22,842 crores that the company took from 28 banks. The resolution professionals under IBC are supposed to find out if the company indulged in fraudulent transactions and report the same to NCLT for it to take punitive steps. But despite several such transactions being reported in the case of ABG Shipyard involving thousands of crores, it did not lead to any such steps or investigations. While this amounts to squandering of public money and points yet again at the need for stricter lending criteria and regulation, what is also appalling is the condition of its staff and workers who have not received their dues for three years of work. A petition has been filed on behalf of 467 staff members demanding their dues from the company. They have filed applications with the National Company Law Tribunal, the National Company Law Appellate Tribunal, and the Supreme Court.

The National Pension Scheme introduced during NDA 1 is a classic product of neoliberal policies that gives no assured pension after old age and makes pensions completely market-driven. It makes pensions insecure as it depends on the whims of the market returns. It is the product of economic thinking that does not want to make social security investments in its people at the cost of making lives far more vulnerable and precarious. The NPS has given returns of about 9% which is better than either the EPFO, the PPF or fixed deposits, but it is subject to market fluctuations, unlike the others. While West Bengal never adopted the NPS and continued with the old, assured pension scheme, the Rajasthan and Chhattisgarh government has recently also reverted to the old pension scheme.

In yet another instance of squandering public money in the name of insolvency, the Amtek group of companies that took a loan of ₹21,000 crores from Indian banks have been put on sale for a mere ₹4,100 crore. While the IBC was purportedly brought to tackle NPAs, what we are seeing is a trail of shady haircuts at the expense of public money to benefit the big players. Electrosteel for instance has been sold off after a 60% haircut and was bought by Vedanta at 40% of its price. Alok industries got an 83% haircut and Reliance bought it at 17% of its original value. Public sector banks (PSBs) have off late accepted haircuts as high as 94% to let off the biggest corporate defaulters.  The Parliamentary standing committee on finance’s report on the Insolvency and Bankruptcy Code (IBC) had criticized the IBC for “disproportionately large and unsustainable haircuts”. Citing Amtek and such others as clear instances of diversion of creditor’s money through preferential transactions, the opposition has called this institutional corruption and has demanded a whitepaper on the insolvency cases.