Yes Bank Fiasco reveals who is in command!

In his recent book, Mr. Rajnish describes a small incident under the chapter ‘SBI Emerges as Saviour of Yes Bank.’ The well-known author Stephen A Schwarzman, MD of Blackstone group and the author of one of the best-selling books- What it Takes: Lessons in the Pursuit of Excellence, was on a visit to India in the first week of March 2020. On the evening of March 5th, 2020, Mukesh Ambani had organized an event at his residence, Antilia, in honour of Stephen for the release of his book in India. The who’s who of the financial industry of India were present at this event. While the event was going on, the news about the moratorium on Yes Bank by the RBI broke out.

The simple fact that the former Chairman has chosen to state this incident in the chapter on Yes Bank speaks volumes. What really transpired in Antilia will be never known until Mukesh Ambani writes about it. The who’s who of the finance industry frequently attend parties at Antilia, while incidentally, Mukesh Ambani is the biggest borrower in the country.

In the banking industry, the bank instructs that the bankers (ordinary officers) should not get close to borrowers, they should not accept gifts or favours. What about the executives? No queries are raised!

Black stone estimated that the losses incurred by Yes Bank were around Rs.45000 crores. Still, they were willing to invest in it, taking up a 20% share. HDFC was also willing to invest Rs.1000 crore. For them to be able to do this, RBI had to remove the criteria that one investment company cannot hold more than a 5% share. Goldman Sachs was willing to invest and Kotak Mahindra too.

Not only that, it would require a write-down of entire equity and AT-1 bonds besides loan loss provisions. Further, there was the issue of liability on account of income tax for which exemption was a must and would be a precondition for investment.

This is shocking on many grounds.

Some positives in this fiasco were-

The biggest question is when we have so many cases of failure of private banks and public sector banks taking over or rescuing private banks (including ICICI at one time by SBI) why is the government still talking of privatisation? Recently, Lakshmi Vilas Bank with a standing of 93 years was handed over to the Singapore based DBS Bank and the promoter shareholders were not given a pie. We have had a long history of bank failures in the private sector (See Annexure). In the US, 512 private banks have failed after 2008 and the taxpayers’ money was used to save a few of them. The customers of the rest were taken care of by the Federal Deposit Insurance, whose coverage is very good. In India, we can get only Rs 5 lakh when a bank fails. Is the government planning to privatise public banks and allow them to fail so that they can be handed over to foreign Investors? Why did the Prime Minister meet the MD of Blackstone in the US during his recent visit? Who really is in Command? Indian Corporates or Foreign Corporates, or both? 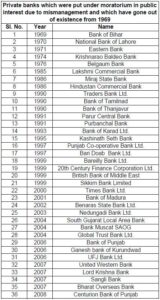