As India struggles through battling a pandemic and subsequent shut down, the government seems to be in no mood on pausing in stifling controversial issues that majorly impact the economy of the country. After introducing the labour codes through ordinances, the electricity act is being amended as well, which according to experts is going to have significant impact on people and livelihood of many. According to experts the controversial amendment bill reintroduces reforms which could not be passed in 2014 and 2018 due to opposition and resistance from various quarters. These amendments were proposed on 17th April and people have been given 21 days to respond to them. The bill proposes the same PPP model of the World Bank which according to many has been a failure. The bill is also proposing the privatisation of DISCOMs in name of franchises in the distribution sector. The tariff will be determined by the Central Commission on a cost basis rather than a competitive basis which will increase the tariff rate and the increased rate will be recovered from consumers. Experts argue that the proposed bill will take away all the powers of the states. To discuss and critique these proposed amendments a national consultation of the said amendment was held on 29th of April 2020 via Zoom video conferencing. The key speakers included Shailendra Dubey, AIPEF; Ashok Rao, AIPEF; Soumya Dutta, Mausam; Leo Saldanha, ESG; Tejal Kanitar, NIAS; Vishnu Rao, CAG; Rajesh Kumar, CFA and Bhargavi Rao, CFA/ESG. The national consultation was organised by CAG, CFA, ESG, MAUSAM, Mahengi Bijli Abhiyan, NAPM. 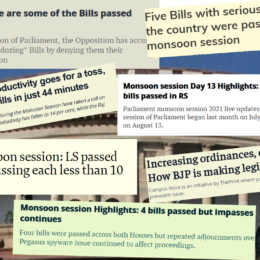