As talk of privatising the Indian Railways gathers steam, the Narendra Modi government would do well to pay attention to the experience of the United Kingdom.

The UK’s railway system began to develop in the 19th century. It was run primarily by four large companies, all of which were nationalised in 1948.

The nationalised railway ran into losses, mainly because the initial laying of the network was ill-planned, leaving large tracts redundant and the system unable to compete with road transport. After the Bleeching Report in 1963, the network was further slimmed down because much of it was underused and uneconomic.

Critics point out that this made the economy London-centric, isolating small towns and the countryside. In 1994, the British government began a sectional privatisation of the network, leading to the existing franchise system under which 25 companies, including British Rail, operate trains across the country. Railway infrastructure such as tracks, signalling and stations is maintained by another company – Railtrack – while freight is operated by six others.

Railtrack didn’t always reinvest profits in the railway infrastructure, leading to a deterioration of the tracks and, as a consequence, accidents. A public outcry compelled the British government to take over Railtrack’s operations. The British rail network today is plagued by crowded trains, cancelled services, and high fares. The coronavirus pandemic further exposed the fragile state of the network. Nationally, the use of railway dropped from 100 percent to 4-6 percent between April and May, making it unprofitable for the private players. The government had to spend £3.5 billion to keep the trains running for essential services and workers.

Several surveys have shown the British public favour re-nationalising the rail network and pressure is growing on the government to do so. On February 7, the Welsh Government brought back the Wales and Borders franchise into public ownership. Similar measures are being anticipated elsewhere in the UK.

The Indian Railways is the lifeblood of the country’s economy, moving people and goods at affordable prices every day. It has also contributed significantly to the socioeconomic development of small towns and cities, enabling movement of labour and goods and linking manufacturing to markets. In 2019-20, the railways ran 13,169 passenger trains and 8,479 freight trains on average daily, carrying 22.15 million passengers a day, before the pandemic.

The railways has vast landholdings, infrastructure and assets. As per its 2019-20 yearbook, the railways owns 4.81 lakh hectare of land, 12,729 locomotives, 2,93,077 freight wagons, and 76,608 passenger coaches. The railway also runs hospitals, schools, and museums as a social obligation.

The railways isn’t just India’s largest employer, it is a reasonably equal employer. It had 12,53,592 regular employees as of March 31, 2020, of whom 16.84 percent and 7.81 percent, respectively, were from the Scheduled Castes and the Scheduled Tribes. In a society ridden with caste inequalities, the public sector, including the railways, is seen as an equal opportunity employer. By privatising its operations, its carriages, its routes, the Modi government will push the railways away from this socioeconomic vision.

Yet, a recent small survey for this study by the author of train passengers from Mysuru and Bengaluru found that while almost all of them were concerned about the rising cost of travel, not many were aware about the privatisation process underway. Some 60 percent of the respondents said they were not aware that private trains will have only AC compartments, and they will run only on the profit-making routes.

Asked if they would take any action to stop privatisation of the railways, over 40 percent of the respondents said “yes” while 13 percent said “no”, with the rest offering a “maybe”.

Most of the employees surveyed are with unions and they complained that their unions weren’t doing enough to educate them about privatisation, nor were they taking any measures to stop it.

There are several federations and unions in the Indian Railways. They are affiliated with central trade unions but they don’t strike alongside workers from other sectors. Of the strikes that have taken place since 2016 where one of the main demands was to stop privatisation, the railways unions have not participated. Railways unions often organise their own campaigns, but they do not join the national mainstream of struggles of central trade unions and federations, according to Ramalingam Elangovan, vice president of Dakshin Railway Employees Union, or DREU.

It has been challenging for the unions to respond to the privatisation push in the midst of the pandemic. But they registered their dissent as soon as it was announced that 151 trains will be privatised. Trade unions such as the Loco Running Staff Association and DREU have held protests at railway stations. Campaigns to renationalise the rail network in the UK such as “Bring Back British Rail”, “Power for the People”, “Action for Rail”, and “We Own It”, have been organised by groups of citizens, railway employees and unions who educated the public about how privatisation had damaged their transport system. Such movements, in Britain and across the world, have also created awareness about the need to invest in eco-friendly modes of public transport to ensure a sustainable future. They recognise that private corporations are in it only for profit, and without accountability. When the public uses and pays for a public service, why can’t the public own it?

India, then, must work to strengthen and expand its railway network, not privatise it.

This article was first published in Newslaundry. 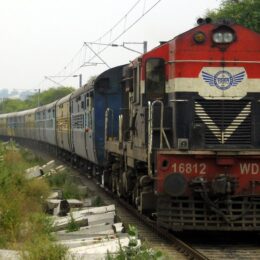