New Delhi: Lending to coal-fired power plants in India slumped 90 per cent to Rs 6,081 crore in 2018 as against 2017 while the funding for renewable energy projects grew by Rs 1,529 crore to Rs 24,442 crore. Also, most coal-fired project loans came from majority state-owned financial institutions while majority private banks contributed three-quarters of all the finance towards renewable energy projects.

These are the findings of the latest report “Coal versus Renewables Finance Analysis” by the Centre for Financial Accountability, a Delhi-based think tank, published today. The analysis examines 52 project finance deals comprising a loan component across 54 coal fired power and renewable energy projects with a financial closure date between January and December 2018. 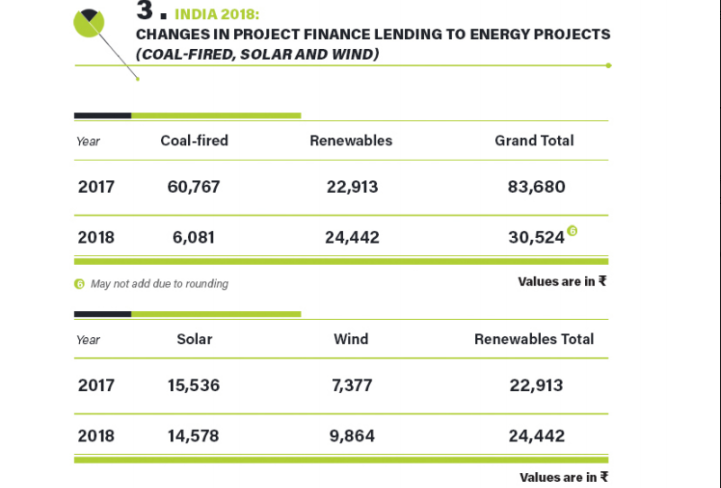 “In 2018, a total of 49 renewable energy projects with a combined capacity of 4.7 Gw obtained loans of Rs 24,442 crore. Solar PV attracted 60 per cent of this finance while the remaining 40 per cent went to wind energy projects,” the report states.

A few Indian states paved the way for the growth of the renewable energy generation capacity in 2018. Projects in Karnataka, Madhya Pradesh and Gujarat attracted half of the entire country’s project finance for renewables across 23 solar PV and wind projects. Meanwhile, Chhattisgarh and West Bengal together attracted finance for three coal-fired power projects but no renewables.

The article, first published on The Economic Times, can be accessed here.