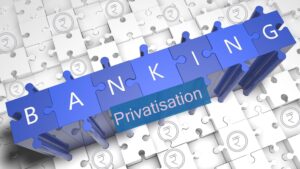 “Banking is a very good business if you don’t do anything dumb,” goes an anonymous quote.

When IDBI was mismanaged, the All India Bank Officers Confederation and All India Bank Officers Association had written several letters to the management and the government to intervene, but the government did nothing! When the bank failed due to the mounting corporate NPAs and indiscriminate lending, the government asked LIC, a public sector company, to invest in IDBI Bank and rescue it. In January 2019, LIC acquired a 51% stake in IDBI and took control of the bank. At Rs. 61 per share, LIC invested Rs. 21624 Cr. It again infused Rs. 4743 Cr from the policyholder’s fund. In two years, it nurtured the bank and made it a profitable bank. The bank also came out of the Prompt Corrective Action (PCA) of the RBI.

Its net interest margin is 3.73%, close to its private-sector competitors. The cost of income is 45.89%, which is a little higher than other private banks. The net NPA is only 1.27% and the Capital Adequacy Ratio is 19.06%. Its balance sheet size is Rs. 297764 Cr, which makes it bigger than Punjab & Sind Bank and almost equal in size to the UCO Bank. As of March 2021, it had 1886 branches in 35 states and 3467 ATMs/CDMs. It had a staff strength of 17319, out of whom 4445 were OBCs, 2514 SCs, 1107 STs, and 117 from the newly created Economically Weaker Section among the Forward Caste. So IDBI Bank is implementing the reservation policy as per its constitutional mandate as a public sector bank.

But, shockingly, the government wants to privatise IDBI Bank and has conducted roadshows in the United States! How can selling Indian assets in the US be Atma Nirbhar? How can it be swadeshi?

How can the DIPAM Secretary dictate LIC? He is not a controller! He is not on the board of directors! He says LIC should divest its shares in IDBI Bank, whereas the chairman of LIC and IDBI Bank, Mr M.R. Kumar wants to keep LIC’s shares in IDBI. It helps LIC to expand the bank assurance business. LIC has turned around the bank very successfully. The shares of IDBI Bank are trading at Rs.30.80, whereas LIC bought them at Rs.61. LIC will incur a huge loss if it sells the shares now.

In 2010, the then Managing Director of LIC Housing Finance Company announced that the LICHFL was in a strong position to promote a bank. Again in 2013, reports came that the LIC Board cleared the proposal to apply for a bank licence. But the government did not allow LIC to start a bank.

The idea of allowing banks into the insurance business was to convert banks into supermarkets for financial services instead of collecting deposits and giving loans. Bank + Assurance became Bank Assurance, and banks started subsidiaries for insurance, mutual funds, funds management, etc. Unfortunately, the government discriminated against LIC. While banks were allowed to compete with LIC in the insurance business, LIC was not allowed to compete in the banking business.

So LIC has enough expertise to run a bank and, with its outreach, it can make IDBI a large and powerful bank. If the government wants large banks to compete globally, as it said during the merger, here is an excellent opportunity. The government should not discriminate. Privatising and selling IDBI Bank to foreigners will be a crime. Converting development finance institutions into commercial banks itself was wrong. Now, selling it off will be worse. What we need are some changes in RBI and IRDAI guidelines, to enable LIC to own a bank. And the government can do this easily.

The government should uphold the Constitution, implement reservation policies, and use the banks to bring down inequality. Selling banks is not good governance. I hope the PM and the FM listen and act immediately.

“Mere good governance is not enough; it has to be pro-people and proactive. Good governance puts people at the centre of the development process,” says Mr. Modi.

Selling public assets is neither good governance nor putting the people at the centre. Please walk the talk, Modiji.