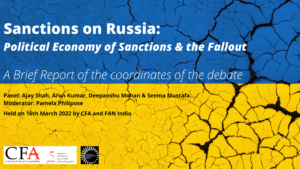 A Brief Report of the coordinates of the debate

The Russian belligerence and the unfolding war has led to an immense humanitarian crisis and the sanctions, while purportedly aimed at hurting the government of the aggressor, also have the potential of causing immense hardships to the people. As the moderator, Pamela Philipose made this important distinction between the government and the people and Seema Mustafa reminded us of the excruciatingly dehumanizing impact of sanctions on Iraq. She said Iraq was reduced to a shell of a civilization with its children suffering from the lack of life saving drugs and so on, much before the invasion began. She also reminded us of the fact that it is the same went led by the US that flattened entire cities which is now posing as the messiah of peace. She said while, we must refrain from “whataboutry” to justify any war, but at the same time we ought to harness our memories to know that there are no heroes here. She also lamented the fact that while earlier journalists covered war but wrote of peace, today from both sides the media is speaking the language of war forcing us to choose sides. Ajay Shah also agreed to this crucial distinction between hurting the people and damaging an aggressor, but he also said that given that the state derives its powers from harnessing its financial capacities, such strategic targeting of its economic stakes (in lieu of strategic bombing), does serve a purpose in weakening a state’s capacity in waging war.

The war, its costs and its consequent militarization, said Arun Kumar, would mean higher profits for the military industrial complex which comes at the cost of cutting down on social sector spending which in turn will hurt the marginalized. Even Deepanshu echoes the same concern that in a world that is still to reeling under the disruption caused by the pandemic, at a time when there needed to be more support for the poor and marginalized, it is the defense expenses that is getting prioritized. The war would also have the effect of giving a boost to jingoist authoritarianism which means a further shrinking of democratic spaces in countries across the world.

In the opinion of Arun Kumar the only possible way out of this crisis would be the immediate end to the hostilities by Russia on its neighbouring country and also the dissolution of NATO which had no relevance in a post Cold War age.

Would the sanctions be effective?

The jury is out when it comes to the verdict on whether the sanctions would have the intended effect on Russia. While a comparison with Iran or Iraq comes up, but Arun Kumar is of the opinion that while Iran constituted 0.7% of the world GDP, Russia accounts for 2% and is also far more superior in terms of technology and hence there cannot be a comparison. He is of the belief that barring some short term disruptions, Russia is largely capable of adjusting to the sanctions albeit with some inconveniences. Sanctions turn a relatively open economy into a relatively close one. But the overall impact of sanctions on a country in his opinion are dependent on a few factors: a) how open it was before and how closed it will be; b) how quickly it is imposed and how long it lasts; c) how resilient is the sanctioned economy; and d) how prepared are its citizens to bear the shock. In his opinion, Russia’s major exports are oil and gas which still remains and in all likelihood will remain outside the purview of sanctions thereby giving its adequate foreign exchange. In case payments are frozen, Russia can threaten to freeze energy supplies which would have a major impact on world economy. So, sanctions can in fact prove a double edged sword. And as Seema Mustafa pointed out, the European Union is already finding it difficult to maintain the sanctions. While there has been immense pressure to impose a full embargo, the German Chancellor for instance has already pushed back saying such a move can put Europe’s energy security in peril. So while Washington is using its whip, the western countries are fast running out of options as they can’t intensify the sanctions without risking domestic blowback.

On the other hand, adds Arun Kumar, Russia can also depend on China to buy its oil and gas and also replace other countries in terms of Russia’s imports. And as far as payment methods are concerned SWIFT can be replaced by the Russian or Chinese alternatives which effectively means Russia may continue to have trade surplus despite the sanctions. In terms of the financial sector, the sanctions certainly has contributed to negative sentiments which is visible in the drop in share prices and value of Rouble which are causes of concern in the short run, but Russia has largely managed to stall the flight of capital by shutting its stock markets. So while rate of investments and growth rate would decline, it may manage to hold ground banking upon its allies mainly China and its technological strengths with a relatively less open economy. Seema Mustafa echoes the same saying authoritarian Putin has an endgame in sight and the sanctions won’t be effective enough to stop him in his tracks. Russia, unlike Iraq, she said can adapt to sanctions with the steps it is taking towards stopping flight of capital protected, pensions, employment, focus on low income families, medicines, and efforts at sustaining the domestic economy.

So, in this light, and also in Deepanshu Mohan’s opinion, one may not be able to work with a preconceived certainty about the effectivity of the sanctions. It may work, but at the same time it can also hurt Russian pride so much so that people rally around Putin. While so far the Russian civil society has largely taken a critical position vis-à-vis the war, but he said time can be a significant variable. There are enough evidence in history in the instance of Cuba, or even Russia itself, wherein countries have managed without much of a dent in holding off against sanctions. And particularly in a context wherein the international cohesion required for a full blown sanction is already tethering, it is not certain as to how effective it would be. Finally he said, while it is difficult to externally bully a bully (read Putin), a lot depends on whether internally Russians chose to rally around him or stand up to an autocratic leader which still remains open ended.

But on the other hand there is also contrary opinion that believes that the sanctions are going to bleed Russia and bring its war machine to a grinding halt. Ajay Shah for instance is of the opinion that while the USSR may have eaten potatoes in the past, but a lot has changed since 1989 as it got more integrated in the market. Hence he believes the pulling of the plug will have consequences. War being an extremely expensive affair involving economic burden, logistics and organization, the sanctions he believes will have a crippling impact as Putin does not have the resource envelop to sustain the war.

On the question of India’s positioning

Whether the war ends soon or not, there will clearly be two spheres of influences or two blocs emerging with a new form of globalization for the time to come with Russia and China on one end and the rich western nations on the other. On this matter there doesn’t seem to be much of a difference. However, there seems to be contending opinion on what should be India’s position. This is in the context of India’s abstention on the matter, its stance of not being overtly critical of Russia and its leaning towards the same.

One of the opinions is extremely critical of this stance urges India to take a more firm position to safeguard its own interest. Ajay Shah for instance critiques it from a fundamental stand point. He is of the firm belief that we need to reinvent our conception of foreign policy as the position of strategic autonomy that we have continued to pursue over the decades is just another expression for doing nothing. While foreign policy is the art of making coalitions and counterweights so as to preserve our interests, the pursuance of non alignment, he believes, is in fact detrimental to our interest given the particularly terse relations with China off late. While all seem to agree that Russia and China would only get closer in the coming times, he believes that by not positioning ourselves against this emerging block India is taking the risk of forsaking western support in case of continued Chinese aggression around our borders. Deepanshu is also of the belief that despite all the claims of being the “vishwaguru”, India is showing a complete lack of foresight and its positions are only responsive or reactionary which has been visible in India’s failure in issuing timely advisory and its delayed evacuation efforts.

On the other side is the opinion that while a more clear positioning may be ideal from our side, but India still doesn’t have the wherewithal to afford having an independent position on the matter. While Seema Mustafa spoke of our kowtow to US financial dictats, Arun Kumar spoke of the relevance of our immense dependence on Russia for weaponry. Pamela Philipose said that starting from Indian state’s interests around the Kashmir valley, its energy and defense needs, it is difficult for India to try a different tune. Arun Kuamr in fact is of the belief that India still doesn’t have the technological superiority to emerge out of this dependence overnight. The only way out would be to invest in quality education, in improving skills and technologies to achieve the weight one needs to take positions in big power rivalries.

Beyond the debates about India’s positioning, what is evident already is the effect the war and the regime of sanctions are having on the Indian economy. While India is shopping for discounted oil from Russia, it is in the context of high fuel prices at a time when they were already high, affecting the diminished purchasing power of millions of Indians still struggling to recover from the pandemic. ​​The CPI inflation in India already crossed the upper limit of RBI’s tolerance band in January and the wholesale price index that has been on the rise since 2021 is hovering around 13%. The uncertainties that war would create in terms of food and oil prices are a heavy cost on poor Indians who had already been reeling under high fuel prices. In such a context, it is of extreme importance to keep a close eye on the war front.