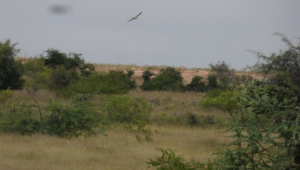 In December 2020, when my friend, a forest department staff- Keshava and I were on a bird walk, around one of Asia’s largest solar parks in Pavagada, we saw a dog-like creature with a kill in its mouth, zipping through thick grass at the edge of the solar park. Unsure if the canine was a dog, we continued our walk, spotting a red-naped ibis nested on a high-tension tower, harriers perched on solar panels struggling to find prey, and several kestrels and black-shouldered kites hovering here and there. In a while, a totally agitated shepherd came running and asked us if we saw a wolf running away with his sheep. Ignoring the fact that we just witnessed a livestock lifting case, we were thrilled to realize that we saw a wolf, since there has been no recent evidence of their presence in Pavagada.

Pavagada, a town in the Deccan plains nestled at the Karnataka-Andhra border, is known for the mysterious case of wolves killing children in the early 1980s. While the mystery in itself was never solved, as an easy solution, tens of wolves were killed and many others were scared away to pacify the villagers. Most of us from this region have grown up hearing these villainizing stories about wolves. But the incident that had just occurred triggered a train of thoughts and made me think about the possible circumstances that led to livestock lifting by wolves. 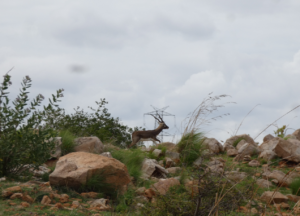 The area where we witnessed the livestock lifting by the wolf looks like a scene from a sci-fi movie- a massive solar park, which has completely changed the land cover and use of ~55 sq. km area (roughly 13000 acres) with long trails of photovoltaic panels from Canadian and First solar, which are securely laid inside the fenced area. Oriented at 15deg to the equator, these panels were glimmering in moderately lit sunlight, converting irradiance to electricity. Though these mega renewable energy plants change the complete structure of the landscape, including areas that might have harboured endangered species, they wouldn’t require prior EIA (Environment Impact Assessment) clearance but just attract provisions of the Air and Water Acts. However, an EIA prepared by Knight Frank for the World Bank clearly mentions the presence of wolves, blackbucks, and others in this landscape, irrespective of the ownership of land. 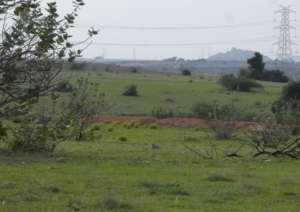 It is not surprising that species like blackbucks, foxes, and others are seen in this landscape. Though much of the land used for this solar plant are private farmlands, they are mostly rainfed and see only one crop per year. For the rest of the year, they are dry savannahs flourishing with native flora and wildlife. One can easily sight blackbucks, foxes, hares, reptiles, and enough grassland birds just by driving around these lands. Post monsoon and especially during winters, these lands transform with fresh grass and other flora filling with rich bird activity which attracts visitors like harriers, and kestrels, among others.

While these private farmlands themselves harbour such endangered wildlife, there are intact natural savannah grassland patches (public land) all around the solar park. One such large patch southeast of the solar plant is an amazing grassland ecosystem dominated by Sehima – Dichanthium interspersed with low hills made up of Archean rocks and, streams lined with Phoenix date palms. The first time when I explored this area, I was stunned to see such a rich ecosystem in this dry, arid region. 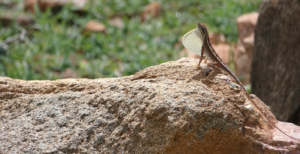 In June 2021, while examining a carcass of a sheep (probably killed by a wolf) lying over a small rocky outcrop abutting a stream in this grassland patch, I stumbled upon a lizard that seemed to have drooping skin under its throat. Our doubt was cleared within a few minutes when that male lizard perched upon a rock and displayed its dewlap- it was a fan-throated lizard. As per experts, it could be a Sitana laticeps species but it cannot be ascertained unless a specimen is captured.

With so much biodiversity flourishing in these lands, it is appalling that such big power plants have come up without having to apply for green clearances. It is astonishing to see that the presence of species like wolves, blackbucks, foxes, and harriers, some of which are listed under schedule I of the Wildlife Protection Act of India, 1972 along with tigers and leopards, have no consideration at all. Though the majority of the project area is on private farmlands, the mere presence of these species should have triggered the project proponents to plan the plant in a more wildlife-friendly way. 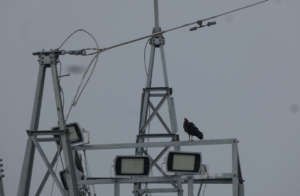 Large fenced-off areas have known negative impacts on wildlife. They act as a barrier to species movement and limit gene flow; intensify and spatially shift conflict, restrict wintering of migratory birds, increase electrocutions by power lines, and shrink grazing areas thereby increasing grazing competition, degrading land, and exterminating native flora. For instance, there have been increasing crop raiding cases by blackbucks and sheep lifting by wolves in the last few years. Similarly, the usage of weedicide in some blocks of the solar plant can decimate native flora. This has been a recurrent issue with mega solar plants across the globe, prompting IUCN to come up with a guideline for “Mitigating biodiversity impacts associated with solar and wind energy development”. No doubt that these so-called green energy projects are seen as one of the major threats to open natural ecosystems.

A further peep into the EIA document reveals stunning details. A rough estimate from the EIA says that the cleaning of solar panels in this plant would require on an average 4.7 to 7.2 crore litres of water fortnightly. But the earlier sections of EIA as well as the Detailed Project Report (DPR) prepared for this plant acknowledges that the entire Pavagada taluka is a water-scarce area. While the households in Pavagada receive water once a week and many other borewells dug for drinking water purposes are drying up, is it worth generating power while basic needs of the local communities are compromised? In order to meet this water requirement, they selectively chose this location based on its proximity to the Peruru dam. One can notice on the map that the plant is surrounded by this dam and a series of lakes that channels into it.

While it is well established that the mega plant has affected local biodiversity in several ways, it has, on the other hand, not helped the local communities either. It has primarily had an impact on the pastoral community. The five villages which host this mega power plant have many shepherd families and roughly around three thousand sheep. Since the entire area is fenced off, the families have to take their sheep to farther places for grazing. Similarly, impacted are families who make use of the grasses to make brooms. Moreover, the power generated from this plant is not supplied for local consumption. Despite hosting one of the biggest power plants in the world, Pavagada suffers power cuts throughout the year.

However, it is also true that the farmland owners were happy to lease out their lands for this plant since it helped them establish themselves financially. Nearly 55% of the total private farmland belonging to the farmers from the five villages that host this plant is under the shade of solar panels today. This precedence has never-ending consequences as more and more private solar farms have begun proliferating across this landscape, pulling more farmlands from the neighbouring villages into its shade. This madness has far-reaching impacts on socio-economic conditions in this landscape along with unforeseeable damage to biodiversity.

Grasslands or dry savannahs are one of the largely ignored ecosystems in India. Though they cover considerable geographic area, they are considered less productive lands, officially tagged as wastelands. However, recent studies have shown that grasslands have very good carbon sequestration potential. Even the rainfed farmlands in these arid regions undermined for agriculture are well-suited for the cultivation of oilseeds, millets, and some pulses. When more of such farmlands are lost for solar parks, forests somewhere in Northeast India will be cleared to grow palm plantations (for edible oil). In an urge to phase out fossil fuel usage, we cannot brace for mega projects of these sort without properly assessing their footprint. None of these plants come with a well-defined exit strategy. Nobody knows what will happen to these lands, panels, and other infrastructure, once these plants get decommissioned.

In view of the conservation of these lands, the biodiversity it harbours, and the communities depending on them, it is imperative to reconsider the need for these massive power projects.