Surely, the Center doesn’t know; had that not been the case, it wouldn’t be giving multiple sets of data, all of which contradict each other. 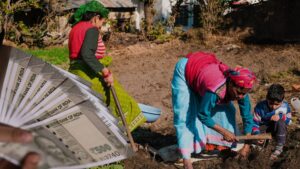 One true “master stroke” that helped the Modi government clinch the second term in 2019 was the PM-Kisan announcement on February 1, 2019 in the interim budget, under which “around 12 core small and marginal farmer families” were to get Rs 6,000 a year in three instalments of Rs 2,000 each. The interim budget made it “retrospective,” to come into effect from December 1, 2018 (budgets are for the next fiscal year, not the previous one), at an annual cost of Rs 75,000 crore.

Later, on June 1, 2019, this was extended to all farm households (including medium and large farmers), thereby increasing the beneficiaries to 14.6 crore (as per the 2015-16 Agriculture Census). On October 17, 2022, when the Prime Minister released the 12th instalment (August-September 2022) of PM-Kisan of Rs 2,000, the total disbursement was Rs 16,000 crore, which translates to 8 crore farm households getting it. This represents only 54.8% of the 14.6 million beneficiary households.

Why this drastic fall? Before explaining this, it would be important to look at some other numbers.

One year after this income transfer or direct benefit transfer (DBT) was launched, the Center declared that the total number of beneficiaries was “over 8.64 crore.”

But on September 6, 2022, the Department of Agriculture and Farmers Welfare replied to a RTI query stating that the number of beneficiaries has progressively fallen from 11.8 crore in the first instalment of February 2019 to 3.87 crore in the 11th instalment (April–July 2022)—a fall of 67% in three years.

As soon as national daily The Hindu published this information on November 20, 2022, the Ministry of Agriculture and Farmers’ Welfare wrote back to call it an erroneous reflection on the functioning of the PM-Kisan scheme.

It then provided a set of data that turned the one it had provided on September 6, 2022, on its head: The number of beneficiaries progressively went up from 3.87 crore in the first instalment of February 2019 to 10.45 crore in the 11th instalment of April–July 2022. It was argued that the responsibility of maintaining the data of beneficiaries remained with the state, although the PM-Kisan is a central scheme for which the Center provides the entire fund.

Which number should I trust? Why is it such a mess?

To understand the mess around the number of beneficiaries, one would have to go back to the circumstances in which the PM-Kisan was announced on February 1, 2019. General elections were due a few months later (April–May 2019). Farmers were agitating for years for higher MSP and other issues. The Congress had promised Rs 6,000 per month (or Rs 72,000 per year) to 20% of the poor (50 million families) under its Nyuntam Aay Yojana (NYAY).

Before the elections, there was a rush to pay the PM-Kisan money. Days after the announcement, the Prime Minister began the payment on February 24, even though there was little time to list and establish the bona fides of the beneficiaries, seed Aadhaar to their bank accounts, and transfer the fund.

How was this speed achieved?

The news portal Scroll investigated this in Assam. Its report published on May 11, 2022, said the state government launched a massive drive-through hired hands, canvassing through WhatsApp groups, and the active participation of local politicians. An official was quoted as saying, “Modiji’s message was: Jisko lena hai le lo. Humko vote de do,” which translates as “whoever wants the money, take it and vote for us.”

On November 29, 2022, the Guwahati High Court ordered “appropriate action” against the state officials allegedly involved in irregularities in listing the beneficiaries after the state government told the court that 12 lakh ineligible farmers had received money and that a departmental inquiry had been initiated against 16 district agriculture officers and 98 agriculture development officers.

The Center has long been aware of what is going on. In January 2021, in response to an RTI query, it was revealed that Rs 1,364 crore had been paid to over 20 lakh “ineligible” and “income tax payee” farmers.

Conversations with government officials in the know reveal that there has been a progressive slowdown in the payment as it became apparent that the rush to get votes had brought many ineligibles onto the list. Following this, several verifications were introduced, like matching with IT records, KYC compliance, and seeding land records of beneficiaries over the past year. It, therefore, makes more sense to believe that the number of beneficiaries is going down now (before they go up in the future).

There is yet another aspect to the PM-Kisan.

What about the landless?

While it benefits even medium (4 ha or more) and large (10 ha or more) farmers, it completely excludes the landless farmers, who constitute 55% of the total agriculture workforce, as per the 2011 Census.

By the time PM-Kisan was launched, Andhra Pradesh’s Rythu Bandhu was making waves, as was Odisha’s Kalia scheme. The Rythu Bandhu provided income support of Rs 8,000 per annum to farmers (before raising it to Rs 10,000) for all farmers, leaving out the landless (it still does). Odisha’s Kalia was giving Rs 10,000 per annum to all vulnerable (small, marginal, and debt-ridden) farm households, with a higher allocation of Rs 12,500 for the landless (which continues).

When I think about it, who deserves income support more: medium and large farmers or landless people, who make up 55% of the agricultural workforce? Three years down the line, the Center hasn’t had time to correct this obvious flaw.