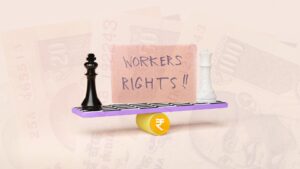 The fiscal challenges of maintaining a low fiscal deficit are used to curtail the entitlements of labour in India. The labour codes even take away existing rights. The e-Shram portal has over 28 crore registrations, but no benefits are available to them. EPF benefits, including a pension of Rs 3,600 maximum per month, are not a living pension. For the past 36 years, banks’ pensions have not been upgraded. No social security, like universal basic income, is considered. The vast majority of unorganised sector workers (94%) do not have access to provident funds or gratuities. One excuse is the fiscal challenges.

Controlling the fiscal deficit at all costs has become the IMF’s, the World Bank’s, and Finance Capital’s (data.imf.org))

Developing countries like India are suffering because of this. The Union Government is forcing the state governments to follow fiscal policies dictated by multilateral agencies.

If we peruse the debt-to-GDP ratios of advanced economies, they are much higher than those of developing economies, but nobody questions them. See the charts given below: 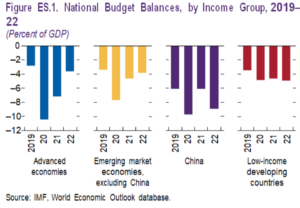 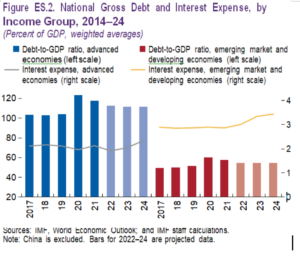 Let us look at the labour scenario in India.

Let us recall the promise of 2 crore jobs per year made in 2014: We have the highest unemployment rate today.

The government should provide more employment, for which there is huge scope. As per the 7th Pay Commission Report (2016), there were 52 lakh Central Government employees. But this came down to 40.66 lakh in 2019.

In CPSES, 260163 jobs have been reduced in 10 years; Indian Railways has reduced 187920 jobs in 15 years, and instead of providing permanent jobs, it is using 7.5 lakh contract laborers.

There are 11 lakh temporary business correspondents versus 7.5 lakh permanent jobs.

All this is done to reduce the fiscal deficit.

Privatization and fiscal deficit
According to our Prime Minister, the government has no business being in business. Privatization means fewer jobs, no less jobs, no security, and

Let us have a look at employment in the public sector and government in different countries. 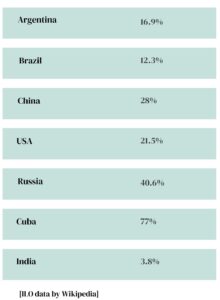 So in India, there is huge scope for providing jobs in the government, public sector enterprises, and public sector banks. A government job entails a respectable, permanent job, paid leave, maternity benefits, medical benefits, a provident fund, a gratuity, and a pension.With this come housing loans, car loans, consumer loans, credit cards, and other benefits. It is time to demand at least one job for every family in the government sector.

Unfortunately, today, 94% of the workers are in the unorganised sector without any
social security; no permanence in a job; no pension; no medical benefits, etc.
The government said that there is no data available on migrant workers.
MSMEs, which create jobs, are in disarray as a result of the 2016 demonetization.

Another alternative is to tax the rich.

Another avenue is corporate tax. See the chart below:

Similarly, the wealth tax in India is NIL. The carbon tax was repealed by this government’s inheritance tax, so there is enormous potential for increasing revenue by taxing the rich.

States can learn from the Kerala Model introduced by Dr. Thomas Isaac when he was Finance Minister.
Through the Kerala Infrastructure Investment Corporation, he could mobilise funds outside the budget and spend them on improving the infrastructure.The revival of 24 public-sector companies made them profitable. The Kudumbashree model, which has created lots of employment for women
and provided finance to panchayats for a real grass-roots democracy and just development that is inclusive,