The Reserve Bank of India, in 2015, issued a Master Circular on Wilful Defaulters, which starts with Introduction:

“Pursuant to the instructions of the Central Vigilance Commission for collection of information on wilful defaults of Rs. 25 lakhs and above by RBI and dissemination to the reporting banks and Financial Institutions (Fis), a scheme was framed by RBI with effect from 1st April 1999 under which the banks and notified All India Financial Institutions were required to submit to RBI the details of the wilful defaulters. The scheme was modified in May 2002, based on recommendations of Working Group on wilful defaulters, which was also revised from time to time as per the recommendations of the Committee on Data Format for Furnishing of Credit Information to Credit Information Companies and various feedbacks received from different stakeholders.”

After reading the Master Circular on Wilful Defaulters carefully, it is clear that either the banks were not informing the RBI about the wilful defaulters and hence violating this circular or RBI is just receiving the information and not acting on it.

The circular goes further and categorises the wilful defaulters as:

Let’s break it down

Point b is in conformity to what Kingfisher did. This comes under the heading of diversion of funds.

In the case of defaulters like Gitanjali Jewellers (Mehul Choksi) should have been reported under clause 2.4 i.e. End-Use of Funds in the master circular, which says:

(a) Meaningful scrutiny of quarterly progress reports / operating statements/balance sheets of the borrowers;

(b) Regular inspection of borrowers’ assets charged to the lenders as security;

(c) Periodical scrutiny of borrowers’ books of accounts and the ‘no-lien’ accounts maintained with other banks;

(e) The system of periodical stock audit, in case of working capital finance;

(f) Periodical comprehensive management audit of the ‘credit’ function of the lenders, so as to identify the systemic-weaknesses in their credit administration.

The clause further states that “It may be kept in mind that this list of measures is only illustrative and by no means exhaustive.”

The circular also states about criminal actions against wilful defaulters.

RBI has entrusted TransUnion CIBIL, a credit information company maintaining credit files on 600 million individuals and 32 million businesses, to perform the role of collecting and circulating information on suit-filed accounts & list of defaulters. RBI has also directed banks, Financial Institutions & State Financial Corporations to submit a list of all the Suit Filed Accounts to TransUnion CIBIL as well as RBI.

Suit Filed cases are petition or complaint, made by banks or notified financial institutions or state financial corporations, to a court that initiates a lawsuit. These cases are on companies who are willful defaulters as per the Reserve Bank of India’s classification. The RBI defines wilful defaulters as the borrowers who deliberately use the banking system to not pay back dues from those who are genuinely fallen on debt trap. TransUnion CIBIL Limited maintains a database on suit-filed accounts of Rs.1 Crore and above & suit-filed accounts(wilful defaulters) of Rs. 25 lakhs and above.

Filing suit is a formal document called a petition or complaint presented to a court that initiates a lawsuit. In the petition, the person/bank filing the petition alleges a cause of action against a defendant/company for which they seek economic relief.

Currently, TransUnion CIBIL maintains a database on suit-filed accounts of 1 crore and above and suit-filed accounts (wilful defaulters) of 25 lakhs and above. This information is available on an application developed with the parameter search process to enable users to access data. It is across banks and companies at various geographical locations.

Banks & FIs are required to report the names of current directors as well as directors who were associated with the company at the time the company account was classified as a wilful defaulter. The list also includes independent and nominee directors. It helps to safeguard other banks and institutions from such directors.

The role of RBI is just to take the reports and keep it with him without acting on it. At the end of the day when companies like IL&FS and Financial institutions are under heavy NPAs and fraud cases then what is the status of these reports and measures.

One wonders if these rules are only on paper or were reported and not acted by the relevant authorities? The RBI must give these answers. In March 2016, while replying to the RTI query about the defaulters, RBI mentioned about the submission of the list with names to the Supreme Court and said that the names cannot be made public.

Looking at the latest Data of June’2018

The state-wise defaulters are maximum in Maharashtra (28% of all) followed by Delhi, West Bengal, Tamil Nadu and Gujarat (The so-called most developed states) 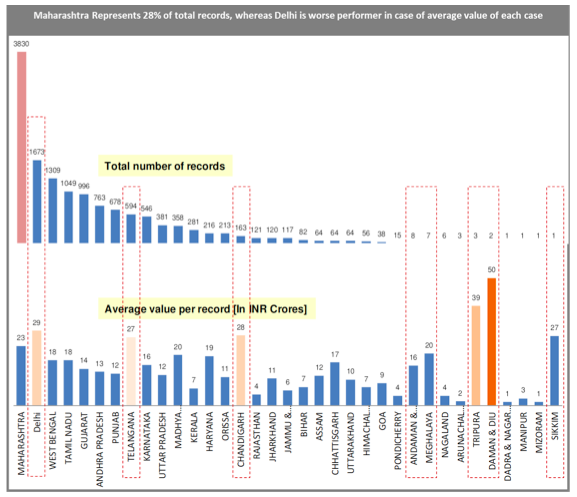 The average value of each default case is highest in case of Union Territory Daman and Diu, but the most alarming rate is seen in Delhi, Chandigarh and Telangana with an average ticket size of default of 29 cr, 28 cr and 27 cr respectively.

Looking at the broad level between states and union territories (Keeping Delhi as a special case), we find that Overseas accounts wilful defaulters are maximum (with an average ticket size of 50 crores), followed by Union territories and Delhi. 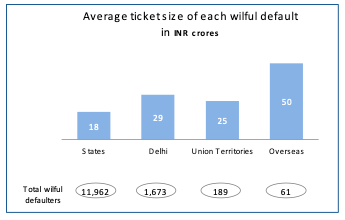