In more recent times, it is strong rise in financial assets, aided by fiscal and monetary support to businesses in response to the pandemic crisis, which has led to a sharper rise in inequality 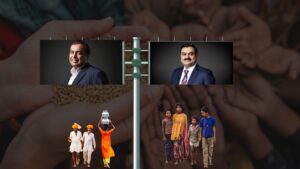 More and more global reports and estimates are pointing to two Indias – the rich India and the poor India – growing further apart in income, wealth, health and education; more rapidly than other countries. The second week of this month brought the UN’s human development (HDI) report for 2020-21, which showed inequality caused a 25% “loss” in the composite human development index (health, education and per capita income) of Indians – when the global “loss” was 19.4%. India’s rank also fell from 131 to 132, of 191 countries.

Simultaneously, another global wealth tracker, Hurun Research Institute, released its “India Rich List 2022” to show the number of wealthy Indians having wealth of Rs 1,000 crore or more, stood at 1,103, as on August 30, 2022 – up by 62% in the past five years.

Gautam Adani added Rs 1,600 crore per day over the last year (August 2021-August 2022) to top the list with a total wealth of Rs 10.9 lakh crore. He overtook Mukesh Ambani, the richest Indian last year, by Rs 3 lakh crore. In 2021, Adani was trailing Ambani by Rs 2 lakh crore – a gain of Rs 5 lakh crore over Ambani. The heartening part is that technology is enabling people to create huge wealth without political largesse. A 19-year young self-made entrepreneur Kaivalya Vohra, who founded grocery delivery service Zepto, made to the list as the youngest member of the Rs 1,000 crore club and 37-year-old Neha Narkhede, co-founder of streaming data technology company Confluent, made to the list as the richest self-made woman.

This month also saw another report from Fortune India, which tracks corporate wealth of top companies and prepared its maiden ranking of India’s richest 142. It found 142 dollar-billionaires are worth a whopping $832 billion (Rs 66.36 lakh crore). That is, worth 26.67% of India’s GDP. The top 10 of them control 48% of cumulative wealth.

Of particular interest is how did the income and wealth of the top 1% or the top 10% went up amidst the pandemic mayhem when economy collapsed in India and elsewhere with millions losing their lives and livelihoods, impoverishment and hunger growing? The economic recovery has been tardy and the global economy is already headed for recession. What did the trick for the rich in such tough times?

The first explanation came from two multinational giants UBS and PwC in October 2020. Their report “Riding the Storm” said the stock market boom “propelled billionaire wealth to a new high” – to “above its 2019 level”. And what led to the stock market boom? It was “huge fiscal and quantitative easing packages” – that is, direct (cash) and indirect (tax incentives) fiscal support to businesses and cheap credit given by governments in response to the pandemic shutdown.

The Credit Suisse report, mentioned at the beginning, confirms this. It says, the most significant development in 2021 to increase wealth (by 9.8% in 2021 over 2020) was “widespread and sizable gains in share prices” – that is, stock market boom. It attributes “the strong rise” in “financial assets” for the growth in wealth as well inequality in 2021. Incidentally, “India led the way with a 3% rise” in financial assets among G7 plus China and Russia that it tabled.

The most worrying part, however, remains a complete radio silence about the ever-growing multi-dimensional inequality from the Indian government.