Banks and Insurance were in the hands of the Private Sector only till 1969. After the nationalisation of banks in 1969 and subsequently in 1980, the outreach of the banking sector changed. Banks became accessible to the common man. The reversal started in 1991. Between 1969 and 1991 the number of branches increased, especially the rural branches, agricultural credit increased from 0.2% of total advances to 19%, and the credit-deposit ratio increased across the country. Under the Lead Bank Scheme, every district in the country prepared and implemented a district credit plan, Integrated Rural Development Plan, self employment scheme, Small Industries Development, Small Traders Credit, Women Entrepreneurship Scheme and many others. As a result, poverty reduced, income inequality reduced and the country saw a green revolution in agriculture, blue revolution in fisheries and white revolution in milk. None of this would have been possible but for the nationalised banks. From 199, in the name of liberalisation, privatisation and globalisation efforts started to handover the banking sector to the private players, step by step. There have been 31 strikes against privatisation due to which the government was forced to go slow. Merger of associates with SBI, reducing the public sector banks to a number of 12, were small steps towards privatisation. Earlier there was disinvestment of shares. Now with the ideology that, “Government has no business to be in business” the announcement has been made to privatise two more public sector banks. This is only the first step, soon all public sector banks will become private and will be in the hands of corporates like Adani & Ambani.  Hence bank employees are on strike on 15th & 16th March and other trade unions and farmers associations are supporting the strike. The General Insurance Employees are going on a strike on the 17th March and the LIC employees on the 18th of March. LIC was also created by nationalising 245 private insurance companies as they were mismanaged. The government had invested just Rs. 5 crore and today the assets of LIC are 34 lakh crore. They are undervaluing LIC to sell it to the private sector. LIC is the only organisation in the world, which pays 95% of the profit back to its customers as a bonus. Except a sum of Rs.5 crore, no other investment was made by the government in LIC, but today it contributes 20% of the expenditure of the five year plan.

Privatising banks and Insurance will affect every citizen of the country.  Education loans, self employment loans, MSME loans, traders loans, SHG loans will also become costly and inaccessible for the poor. Insuring health, goods and even life will become extremely costly for the common citizens and they will lose the security of their savings. This is going to be the biggest loot in the country. The Banks have almost Rs.150 crore as deposits. Most of it is small deposits from households. In Spite of low interest and high service charges people have faith to keep this money. But will it be safe in the hands of private corporations? Never! This amount will be given as credit to corporates and get looted as ‘Non Performing Assets.’ This will lead to a major financial crisis. Apart from looting these deposits the corporates are aiming at the fixed assets- land and buildings of banks and insurance companies who have massive assets. Most of them are valued at ₹1 due to depreciation as per norms. But their actual market value may be more than ₹150 lakh crore. It has to be stopped!

The battle is not going to be easy.  We have to go to the people, students, youth, women, farmers, traders, entrepreneurs and appeal to them to join the struggle to save the public sector and save India. The banking trade unions and All India Insurance Employees Association are taking the lead with the slogan “Let’s go to the People”. 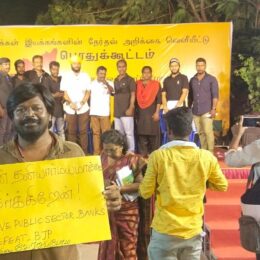 Glimpses of Public Support to the General Strike 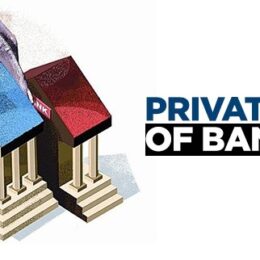 Can Bank Privatisation be stopped? 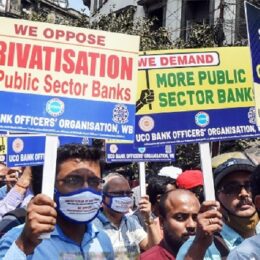 Why Public should Oppose Privatisation of Public Sector Banks!