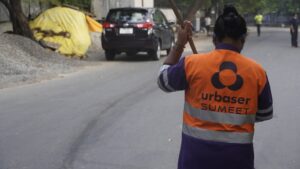 It is more than a year since solid waste management work was massively privatized in Chennai. In October 2020 the Greater Chennai Corporation (GCC) signed papers with Urbaser Sumeet, a joint venture between Spain-headquartered Urbaser and India’s Sumeet Group. It bagged the contract for eight years in seven GCC zones (9 to 15), which is almost half the city. Simultaneously, the contract for four other zones was awarded to Hyderabad-based Ramky Enviro Engineers.

Although sanitation work has been outsourced to private players in the past, this is the largest under the GCC. Urbaser says the Chennai contract is their largest, valued at approximately 480 million euros. It covers a region of 207 sq km with more than 3.7 million inhabitants, stretching over 92 wards and 16,621 streets. Given that Urbaser is an international company that employs 50,000 workers in cities across the world, it is telling of how vast a project this is.

The mass privatization move left 2,000 odd workers unemployed overnight. While the younger workers acquired jobs with the private company, the senior ones, who worked with the GCC for over a decade or more, suffered unemployment. It wasn’t all rosy for those who bagged the jobs. Their take-home salary was reduced and they worked under constant fear of job loss.

Moreover, this mass privatization move shattered their dream and decades-long struggle for permanent employment under GCC. 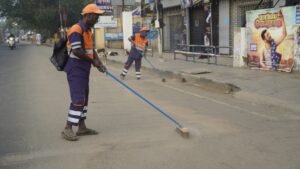 The manual sweepers, who are predominantly women, were receiving Rs 391 per day while with the Corporation, which added up to Rs 11,730 for 30 days. Now they get only Rs 9,000 in hand every month but are eligible for PF and ESI. With the cost of living shooting up, their income has not only decreased in absolute terms but also in relative terms.

The sweepers are divided into three shifts, from 6 am to 2 pm, 2 pm to 10 pm and 10 pm to 6 am. Given the odd timings, they eat out at least once a day, which costs them around Rs 50 and is a burden on them. Notably, they worked a single shift during office hours under the GCC. 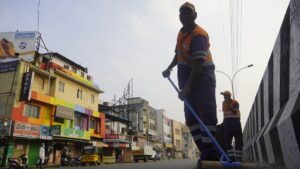 Sanitation workers are usually assigned work near their residence, but not necessarily within their own division. The company allegedly believes workers would skip work if deputed too close to their homes. As a result, workers spend a lot of time and money on travel.

Also, conservancy workers must report to the Division office half an hour prior to work and then head to their work site. If there are delays, assistant managers are expected to report to their superiors.

Given the fully digitised attendance, there is no space for negotiation. In case a worker reports late to work, their daily wage is affected. Despite working eight hours, they spend around ten hours on work every day, including travel time.

The Secretary of Red Flag Sanitation Workers Union P Srinivasulu said “although they have four days of leave every month, they are made to work on those days citing a shortage of workers. Yet, when they need to take time off, they are not compensated and instead their wages are cut. They work more days than what they are paid for”. 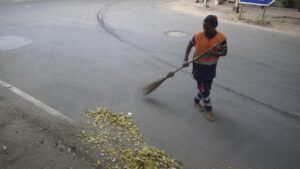 The door-to-door garbage collectors use peddled vehicles under the GCC and are satisfied with the introduction of BOVs by Urbaser Sumeet. These vehicles are faster and require less energy. It speeded the process and increased the coverage of each worker, in effect reducing the number of workers.

Source segregation of solid waste is the basis of the whole model, but most residents do not comply. The work falls on garbage collectors, who do it using their bare hands. This was not part of the deal when they were hired for this job.

Each garbage collector has to collect 250 kilograms of degradable waste every day. If vegetable shops are within their radius, they can reach the target, otherwise, they have to work longer hours to reach it. Additionally, if they are repeatedly unable to reach the target, their daily wages are affected.

Moreover, garbage collectors should preferably own smartphones with internet facility to capture photos when at work and upload them to the app. This expense is to be borne by the worker.

Questioning their dignity, they are also constantly watched by their superiors to ensure the collected garbage is not sold off.

The plight of Women Workers

In October 2021 a woman sanitation worker in the Perungudi zone attempted suicide saying she was sexually harassed by her supervisor. Despite her attempt to raise a complaint with the company, her husband, who also worked with Urbaser Sumeet, accused the supervising assistant of threatening her. She took this drastic step fearing the loss of both their jobs.

Such harassment is not uncommon in this sector, but very few cases are reported. Although more than 80% of the workers are women, they are not aware of any committee against sexual harassment. And if there are committees, whether workers are a part of them is questionable. There is no transparency in this regard.

Although they have no access to washrooms and have to urinate in the open, they have made no demands with the company. They hesitate to take up issues with trade unions fearing job loss. Moreover, there is a large reserve of labourers who could easily replace them, so the company has the upper hand.

This sector is notorious for punishing workers engaged in trade union activities and those holding protests. Notably, Ramky group which handled sanitation work for GCC in the past, dismissed five trade union office bearers and usurped PF fund of 3,200 workers for joining a union.

Contract conservatory workers in the GCC have already demanded permanent positions, and they are securing them little by little. The massive privatisation move shattered their years of struggle and the dream of permanent employment.

Srinivasulu said “within a month of joining Urbaser Sumeet a worker died during work. She worked under the National Urban Livelihood Mission for 16 long years and was awaiting a permanent job. Her family got little compensation”.

The Red Flag Union is demanding the GCC to intervene and ensure minimum wages are paid and benefits reach them properly. The government should not wash their hands off saying they are no longer responsible, argues the union.

Although the contract workers under the private companies work as much, and even more hours, than the permanent workers under GCC, there is a considerable disparity in pay, benefits and nature of work. Permanent workers get Rs 15,700 including house rent and transport allowance. This itself is not sufficient, workers are demanding Rs 700 daily wages.

All photos by the author.

This article is written and published as a part of the Smitu Kothari Fellowship 2021 of the Centre for Financial Accountability, Delhi.