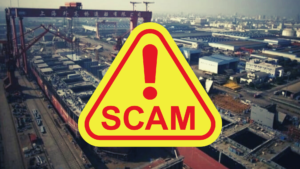 To begin the story, here is a gist of media reporting on the issue-

ABG Shipyard was incorporated on 15th March 1985 as a ship building and repair business in Gujarat with an office in Mumbai. Its Chairman as well as Managing Director is Rishi Kamlesh Agarwal and Directors are Santhanam Muthasamy, Ashwini Kumar, Sushil Kumar Agarwal and Ravi Vimal Nivetia. CBI has filed a FIR on them on 7th February 2022.

The company has constructed 165 vessels in 16 years. The Company has a loan account declared as NPA of Rs.22842 Cr. The loans were given by a consortium of lenders led by ICICI. The loans were disbursed between 2005 and 2012; it became a stressed asset in 2012 and was restructured under Corporate Debt Restructuring (CDR) on May 27, 2014.

Earnest and Young conducted a Forensic Audit for the period 2012-2017 and reported the fraud. The fraud was classified in January 2019 but the complaint was lodged on November 8, 2019. The CBI asked for more details and a detailed complaint was filed in August 2020. And then, CBI filed a police report only on 7th Feb 2022. The complaint of fraud states diversion of funds, misappropriation and criminal breach of trust.

The company has 1.21 lakh sq.m of land allotted by the state government of Gujarat. In 2007, another 50 acres were allotted to Dehej by the Gujarat government. So some security is available. The diversion of funds has been done through 98 companies, many through Singapore, so there must be assets abroad. The modus operandi is similar to that of Vijay Mallaya, Meher Choksi, Nirav Modi and many others. The CBI has sent look out notices and claimed to have enquired Rishi K. Agarwal.

The root cause of the problem

The RBI Guidelines on lending to corporates favor corporates over bankers. It’s based on projections and security is seldom adequate to cover the loans.

Many serious questions arise out of this-

As a banker, I know a number of cases which were reported as fraud without a forensic audit and where FIR was filed immediately. The finance minister is making a fool of us by saying that it takes 52-56 months to declare a fraud!

This was introduced on August 23, 2001 based on a committee report headed by Mr. Vepa Kamesam, then Deputy Governor of RBI. It was reviewed by another Committee headed by Mr. S. Gopinath, Deputy Governor, RBI in 2014. The purpose of CDR is to help genuine borrowers in times of difficulty. It has an excellent monitoring mechanism. But, it cannot help or save fraudsters and willful defaulters.

The restructuring schemes like CDR, SDR, S24, JLF were withdrawn in 2018 as National Company Law Tribunals came into being through the Insolvency and Bankruptcy Code (IBC).  This has only helped to loot the banks further, as also pointed out by the Parliament Standing Committee on Finance, yet nothing has been done.

But since the CDR was used, the bankers and RBI were well aware of the problem and should have smelled the diversion of funds and fraud. Since the CDR failed after 2014, there has been some invisible hand holding up criminal action.

Why SBI had to file the case instead of ICICI?

As Consortium leader it is the responsibility of ICICI to file the case. It has simply shifted responsibility. Who permitted this? Was it the government? Did the appointed directors on the board of ICICI play a role? This is another case of a Public Sector Bank stepping in to rescue a private sector bank. Now all the blame falls on SBI instead of ICICI. SBI is only the third largest lender after IDBI Bank in this case. As it is the largest public sector bank, the responsibility cannot be shifted to SBI. In that case SBI should have been made the consortium leader.

Who is responsible for the delay in filing the FIR? What is the accountability of CBI and its controller, the home minister, in the delay which appears deliberate?

In 1965, Lal Bahadur Shastri resigned, accepting responsibility for a train accident that took place in Andhra Pradesh. Nehru did not accept it. However, when another accident took place at Ariyalur he insisted and resigned. He was not driving the train but as minister he bore moral responsibility.

In 1957, T. T. Krishnamachari resigned as finance minister when the LIC was accused of buying 1.24 crore worth shares of Haridhas Mundhra though the Chagla commission did not name him anywhere.

K.D. Malvia, the Petroleum Minister who is hailed for the Indian oil sector, resigned when he was accused of asking a private firm to help someone in the election.

K. Krishna Menon resigned as Defense Minister in November 1962 when he was criticized for the China war though he was not the Army General, he had a chequered history. V.P. Singh resigned as finance minister when he was asked to move to the defense ministry as he had conducted many tax raids. History is replete with such examples.

Will the present Finance Minister resign for the increasing frauds, increasing write offs and increasing inequality?

Needed Overhaul of the System

The NPA norms of Asset Classification require a relook to help the genuine borrower in difficulty but take stringent action against fraudsters and willful defaulters. The SARFESI Act needs more teeth and NCLT needs to be wound-up. Even now recovery percentage is more under SARFESI Act as per the RBI report.

There must be an end to all the secrecy surrounding loans and borrowers. A depositor can have privacy and secrecy but not a borrower who takes depositors money as a loan. Transparency is needed to avoid frauds and willful defaults.

Let us do something before the five-six ‘Global Champions’ leave the country with the loot.