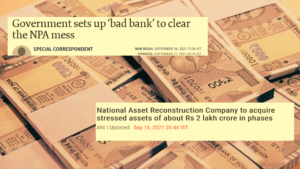 The Bad Bank will buy non-performing assets of the banks by giving 15% payment in cash and 85% in security receipts issued with a Govt guarantee for only a period of 5 years. There is no guarantee that amount will be recovered in 5 years. The experience of Asset Reconstruction Companies shows that there is hardly any recovery after the payment of 15%. Even if there is, ARCs use it for their expenses and the banks seldom get anything.

National Company Law Tribunals are already helping the corporates to loot the banks. They have become brokers for the deals. In the name of ‘haircuts’ huge loans are being written off. One corporate is saved by the haircut, the average of which is 64%, and another corporate buys it at a cheap rate. The borrower as well as the buyer is saved. The former gets away with no liability, while the latter acquires huge assets at throw away prices.

Mukesh Ambani bought Anil Ambani’s company with a 94% haircut. Vedanta Agarwal bought 13 Videocon group companies with 95% haircut. The Bad Bank is the latest trick to help the corporates. Instead of buying the small loans of the farmers, students, failing start-ups and poor women, the Bad Bank is going to buy big loans above Rs.500 crores. The initial target seems to be 90000 crores which will keep increasing.

The borrower will be benefited because the banks will stop following up the loan and the Bad Bank will go for one time settlements, writing off most part of the loan. The moment the NPA is sold to the Bad Bank, the bank will get rid of the loan in its books. The provisions made will be rolled back to the balance sheet as income. So the bank will show a good profit, and it can be put on sale as per the Finance Minister.

It’s not going to be that easy. The NPAs are mounting. Almost all the MUDRA loans are going to be NPAs. As on March 2021, the NPA was 8.35 lakh crores out of which 77.9% belonged to the corporates. KV Kamath Committee has stated that corporate loans about Rs.15.52 lakh crore are under stress after the pandemic. Before the pandemic, Rs.22.20 lakh crores was under stress.  So Rs.37.72 lakh crores is under stress. In the last 6 years, banks have written off Rs.10.83 lakh crores. So there are going to be more problems. The market understands this. Even the supporters of the market economy say that Bad Bank alone cannot solve the problem and infusion of additional capital is needed. Stringent recovery mechanism is needed. The Govt is bankrupt, that’s why it is planning to sell assets worth Rs.6 lakh crore. How can it infuse capital?

The only way out is real recovery: strengthening the laws and recovery mechanism. Attaching personal assets of the directors in these companies could help. We need to name and shame them instead of protecting them. The names of companies and their directors should be published when loans are written off.

DRTs take up cases filed by banks and financial institutions above Rs.10 lakhs (above 20 lakhs from 2018).

​A study published in the Journal of Legal Studies and Research shows that instead of 6 months prescribed by the law, DRTs take 2 years on an average to complete the case. DRTs lack training for recovery officers. The study recommended more DRTs, fixed time frame and strengthening of the laws. This was not done.

​The Scroll wrote in 2017 that Indian banking crisis is made worse by the poor performance of its DRTs.  The government did nothing about it.

There are 29 ARCs registered in India, including Reliance, Aditya Birla, Edelweiss, India Bulls, and JM Financial. They are regulated under Securitisation and Reconstruction of Financial Assets and Enforcement of Securities Interest Act 2002 (SARFAESI Act 2002).

“The ARCs have heavy borrowings from the banks. Considering that the banks are not just the major shareholders and lenders to ARCs but also sellers of NPAs to ARCs it may be necessary to monitor if there is a circuitous movement of funds between banks and these institutions” says the RBI report.

​Studies by various institutions including RBI do not show any great recovery by ARCs because they are dealing with non-performing assets.

​The new ARC called the Bad Bank will have the same fate. It is clear that the banks are going to write off more loans and clean their balance sheet and wait for sale or auction by the Finance Minister.  Who is going to buy, is a big question.  There will be a few corporates. But they are going to ask for throw away prices. Though the banks have huge fixed assets, the value will not be reflected correctly in the balance sheet or share prices.

We need to learn from experiences and put a stop to these practices.