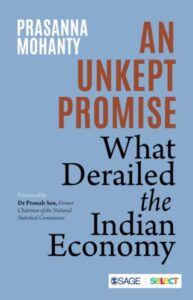 It is nearly settled that the Union Budget presented early in February 2022 is clueless of the realities and apart from showing a mirage of amrit kaal (an auspicious time to begin new work) it does nothing to address the present realities.

But what are the present realities?

Prasanna Mohanty’s An Unkept Promise: What Derailed the Indian Economy (SAGE Select, 2022) is precisely on that.

Written in a lucid language, bringing his experience and keen observation of Indian economy in the past nearly three decades as a journalist, Mohanty looks at the economic landscape of India since the Modi government was sworn-in in 2014 and explains what went wrong based on data and hard evidence.

What makes this book stand out is the way it is situating the economic analysis within the larger political canvas, reiterating that the political institutions, political environment, and the economic system are interwoven and they have to be looked at in its entirety and not in water-tight compartments.

He eloquently explains the two factors on which this regime is thriving – absence of credible economic statistics and institutional failures.

Mohanty says that not only did the government fail to collect relevant information, it also manipulated GDP numbers and suppressed critical information and data.

He cites two examples to support this. “The last household consumption survey of 2017-18 was junked after its content was leaked showing that the real expenditure had fallen for the first time in 40 years…”

The NITI Aayog’s report on Sustainable Development Goals for the period 2018-19 showed an increase in poverty, hunger and income inequality in 22-25 states and Union Territories out of the 28 it mapped. However, a follow up report for 2020 showed a dramatic reversal of this data, showing increase in data only in less than 14 states and Union Territories.

The period Mohanty covers in this book has seen a deliberate disregard for facts, evidence and data in favour of outwardly claims, rhetoric and a divisive agenda. So much so that the National Statistics Commission Chief, P.C. Mohanan had to resign in protest.

Dismantling the Planning Commission of India (PCI) in 2014 and replacing it with a think-tank NITI Aayog is where the seeds of this economic distress was sown, according to Mohanty. From providing economic logic and evidence based, planned growth model, India moved on to a non-planned and self-serving growth model and reducing the think-tank into “a big cheerleader of all of the government’s policies.”

NITI Aayog’s uncritical support to demonetisation, rolling out of GST and the (mis)handling of COVID-19 (remember the graph which claimed by May 16, 2020 India will have zero cases?) are examples to this.

Giving a miss to parliamentary debates, disengagement with public debates, criminalising dissent, laws being passed as money bills, introducing electoral bonds bypassing and undermining Election Commission, mainstream media turning subservient to the regime and not holding those in power to account are some of the cases of weakening of democratic checks and balances that Mohanty discusses.

Mohanty quotes IndiaSpend’s analysis which showed that during Modi’s first term (2014-19) only 25% of Bills were referred to parliamentary committees compared to 71% of United Progressive Alliance-II or 60% of UPA-I and only 10% of bills introduced during the second term of Modi government was referred to committees.

Mohanty also cites the fall of India’s top auditor, the Comptroller and Auditor General of India. While it played a critical role before 2014, post that, its wings were clipped to the extent that in the Rafale deal corruption scandal, it could only produce a ‘redacted’ report withholding critical information, while in the past whether on Bofors, or a ‘presumptive loss’ in 2G spectrum allocations, CAG’s reports brought in regime changes.

The years that Mohanty analyses in the book saw a nearly 75% reduction in the vigilance of the CAG when it comes to matters related to the central government ministries and departments.

Weakening of institutions and processes led to Sweden’s V-Dem Institute, which measures democracies in the world since 2017, or USA’s Freedom House or a study led by Massachusetts Institute for Technology (MIT) rating India as ‘electoral autocracy’ or ‘partly free’ in political rights and civil liberties.

It is in this backdrop he analyses the derailment of Indian economy in the book.

The book identifies demonetisation and rolling out of GST as the two major setbacks which accelerated the downward slide of economy, that was already nosediving. While a lot has been already said about these, Mohanty traces back the origins of the idea of demonetisation and laments that no democratic institution stood up to protest it, emboldening the autocratic streak of the new government. He goes on to explain the structural and operations flaws of GST at great length.

In the following chapters he talks about the pandemic in detail, including untimely and reckless lockdown, collapse of health system and vaccine debacle; the farce of Atmanirbhar Bharat; dissects the farm laws and draws lessons from corporatisation of farming in US 40 years ago; explains the dangers of labour codes; push for privatisation of public sector banks in the name of banking reforms, forgetting the purposes for which they were nationalised five decades back; the mindless privatisation of public sector enterprises and the myth of private sector efficiency and a critique of neoliberal economic policies ushered in 1991.

While the book captures in detail the contours of an abject economy we have inherited, followed by a series of mindless economic decisions taken by this government since 2014, it is also a blueprint for any future government on where to start rebuilding it, a task which looks impossible from where we stand now, but one that we cannot give up on.

The original article published in The Wire can be accessed here. 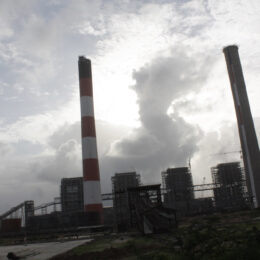