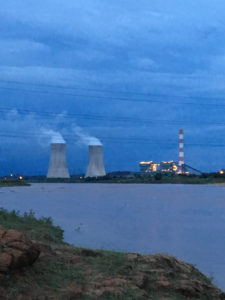 In the last week of September 2019, as part of a team I attended a programme taking place in the village Bhumka in Sidhi District in eastern Madhya Pradesh. Sidhi is a neighbouring district of Singrauli which is an important coal-rich area and has a high density of mines and thermal power projects. The programme was a dialogue which constituted of a workshop and discussions on ongoing struggles in the area, energy finance, climate crisis and its implications, unfair banking systems and rising fees and charges, put together in a larger context of anti-people politics and development. Leaders from movements led by affected communities were present at the dialogue and mahapanchayat on the third day of the event to forge a collective response.

Known as the ‘Vindh’ region named after the Vindhayachal mountain ranges which stretch across the state, or Baghelkhand on the language Bagheli which is spoken in the area, this tract is also known as the Coal Belt. Communities’ resistance to being displaced and uprooted from their lands goes along with a host of health problems which accompanies the workings of coal mines. Workers at these mines in places such as Singrauli and also their families and villages in the surrounding areas suffer from grave health issues ranging from silicosis, fluorosis and mercury contamination. Flyash and dust caused by transportation of coal has also been a long standing problem. High amounts of fluoride in drinking water has led to sealing of hand pumps in the area. Despite the installation of a pipe conveyor in Singrauli-Sonbhadra region, coal is being transported in open trucks, leading to noise and air pollution, affecting the lives of many.

In attendance at the meeting in Sidhi were leaders and activists from adivasi and farmer communities, representatives of the movements against Aryan power company, Gulab Sagar dam, Sasan ultra mega power project – the largest integrated power generation and coal mine project in the world, Sanjay Tiger Reserve, Reliance Power Plant in Chitrangi, DB power plant in Mahua village and other struggles in nearby areas. There was a shared solidarity with some such as against the Chutka Nuclear Power Plant where 450 families from three villages face displacement and another 575 villages affected alongside. The struggle against which had been going on since 2015. The recent surveying of uranium deposits in Betul was also discussed and the implications of that for the communities living there. For issues even closer to home one didn’t need to step very far.

A good view of the Jaypee Nigrie thermal power plant could be seen from the venue of the meeting. Giant chimneys blowing smoke round the clock and the sprawling machinery of the plant spread across 1080 acres are a regular feature of the landscape since 2015. Installed with generation capacity of 1320 MW of energy, the thermal power plant supplies power to larger cities while the immediate surrounding areas still do not receive a regular supply of electricity. Much like the conditions surrounding Rewa Mega Solar Power Project which famously powers the Delhi Metro. One of the speakers elaborated that the plant itself is lit up every night after sunset, seeming like a whole new sun. For those living in the vicinity, there seems to be no respite from these bright lights of ‘development’. The water from Gopad river which runs next to it is used by the plant for its functioning for power generation and cooling. To store water a barrage has been built across the river close to the power plant. Reminiscent of the struggles of fishworkers affected by the Tata Mundra plant, locals expressed that the health of the river has suffered since the functioning of the plant and fish has become scarce. 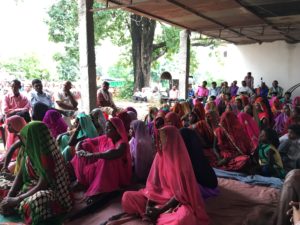 56% of energy in India is generated by coal projects. Pollutants from power plant chimneys affect air and water with ash, mercury, emissions. A rise in surrounding temperature and on a larger scale the global temperature gets severely affected by thermal power generation. Soil, groundwater and surrounding water bodies’ quality is directly affected which affects farm and fish produce. While discussing the climate crisis and its implications with the participants, farmers were the first to readily acknowledge changes such as these. Heat of the sun becoming fast unbearable as the day advances is a new experience for them which ends up drastically reducing the work hours they can put in, which never used to be the case till a few years back. All the traditional knowledge that was utilised in carrying out cultivation till recently seems useless now since natural systems are off balance. The rising level of Greenhouse Gases and major causes behind it like extraction and processing of coal and the contribution of the transport sector were focused on. The almost singular responsibility of corporations and urban development in causing the climate crisis stood out starkly.

While discussing the idea behind the development of Smart Cities, it was elaborated on how cities cannot sustain without villages and smaller towns. To build and run cities, cheap labour comes from these places. While even displacing entire villages from their land, ‘experts’ work on the needs and finances of livable cities, and in finding ways to ‘improve the national economy’. While the earlier priority of nationalised banks were small farmers and workers, in the last 20 years focus has shifted to non primary financing over working class wages. In the functioning of the current model of development – ‘The city only takes and doesn’t give back’. Ecological balance of coastal areas where there is an increasingly high density of planned projects suffers as much as the rivers and forests of central India. Interestingly, Sidhi town has been named officially in the list to be developed as a Mini Smart City. Ex- CM Shivraj Singh Chauhan approved Rs. 32 crores for the project in 2018.

It is imperative to remember that the funding of projects such as these come from the people’s money. Jaypee took a 6000 crore loan from a total of 13 banks to set up the Nigrie power plant. Of these the largest share was of the State Bank of India. The process for these projects begins many years before their creation with getting environmental clearances. The total cost of these projects pan India is 12 lakh crores. There is an ongoing study on 146 projects of the last 3 years. More information is being found about the financing of thermal power projects, and it must be noted that the majority of funding comes from the public sector and only a smaller portion from the private sector. Looking at bank charges being levied on unsuspecting depositors, it was revealed that of 160 crore savings accounts, 1600 crore rupees was earned through bank charges. The mechanism of setting up of long term tariffs such as that of electricity was also discussed including its nitty gritties where power lies with companies in affecting increase and decrease of tariff but not on public demand. 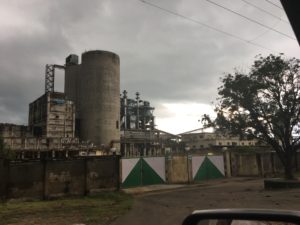 The movement in Chitrangi has been a long one. Since 2009, 4000 acres of adivasi land has leased by Reliance Power. Only partial compensation was given and work has still not started. The movement demands that full compensation be given or work be started on the land. They ask that the precarious situation of existing in limbo be solved, that the state and company go either this way or that. For Sanjay Tiger Reserve, in Sidhi and Koriya districts, 50 villages were displaced. 1100 acres were signed over by 550 signatories, with 90% of the land belonging to adivasis.

Farmers who lost their lands to Aryan power plant continue to work on their fields, while the ownership remains with the corporation. According to those involved in the struggle, the current state government’s pre election promises which were pro farmer and declared that land acquired should be returned to the farmers has still not been implemented. Name of the kabzedar, rightful worker of the land deserves to be put down as the owner. The focus collectively of all these struggles is on displacement, coordination of different movements, acting against the exploitation of natural resources like coal and bauxite and violation of the rights of adivasi and farming communities. A traditional way of protest from people of the Vindh has been poetry, Bagheli poet Sukhai Prasad Atal who was briefly in attendance on the second day added to the zeal by reciting some of his Hindi and Bagheli works.

It was expressed that real development politics must be about improving the average citizens’ life quality and not just about votes and election manifestos – of mandirs and empty promises by parties – ‘The natural resources – water, air, rivers and hills were entrusted by our ancestors to us and we carry the responsibility of handing them over to the next generation. Instead we are left with only the burden of preparing young people for renewed struggles against big players and powers that only act against them for profit.. It becomes the duty of those who live on these lands to question and demand accountability of the money taken by banks and to find out for what reasons. Local communities asserted that iIt is our right to protest by saying no and not sign on papers offered.’

The existing governments can only be pressured if issues and demands put forward in one voice. According to a speaker, in contrast to the way in which Jaypee power plant lights up at night, the ‘people’s struggle can at least be like a lit lamp to show the way in the dark, even if not the sun that lights up the entire country’. In response to the heavy rains which lashed the district in September, people of Sidhi expressed that this season’s crops might have been destroyed but their drinking water is now ensured for the next three years. The people’s optimism stands against oppression, the three day meeting ended with a resolve to collectively move forward.