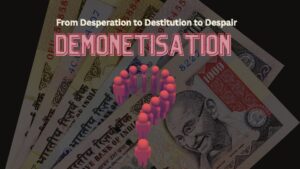 The callous and unwarranted announcement of demonetisation in November 2016 was one of the cruellest blows to the majority of India’s citizens, compelling them to plunge from what was already a life of desperation even deeper into destitution. This senseless, unethical, and economically irrational policy has had an intergenerational impact, especially on daily wage workers, and has triggered violence on livelihood sustainability, all of which have been exacerbated by the most brutal lockdown announced in March 2021 as a “policy” response to the COVID pandemic, which left almost one-third of India’s workers stranded on roads with no state support even in the form of food and water. Migration is not necessarily a one-way, linear process as perceived within the broader paradigm of labour and livelihoods, with workers going back to their rural roots and keeping the urban-rural continuum alive in numerous ways. Central are issues of sectoral, regional, horizontal, and vertical movements of workers and their earnings, the nature and level of dependence on remittances, and the extent of permanent temporariness and permanent movement. Migrants have been forced to return to their villages, further stressing an already stressed agricultural sector.

Annabhau is a carpenter—48 years old, certainly not an old man. Born in a ‘prosperous” village in Maharashtra, where prosperity eluded him and many others like him—landless in spite of land reforms—a Dalit in the land of Ambedkar, he was excluded economically, socially, culturally, and politically. married to an equally excluded woman who bears the additional burden of her gender. Compelled to migrate ‘involuntarily’ due to the lack of a coherent agricultural policy, he, along with his mother and young wife, came to the city of hope—a city that is unfriendly to the already excluded and excludes them even further by not providing affordable housing to those who create this city. Living on the outskirts of the area of Mumbra, Annabhau worked hard for over two decades and became a skilled worker, and a carpenter, sending some amount of money home to his parents. He was able to eke out a ‘chalta hai’ livelihood, educating his two children up to the secondary level. Life and living went on, grudgingly, with several obstacles but still somewhat manageable. And then came 8th November 2016. In seconds, the lives of Annabhau and millions like him were shattered. A skilled worker, proud of his carpentry expertise, was forced to take up manual scavenging: “Smell my hands, smell them… Even after a year, the smell permeates every cell in my body.”.

Jobs vanished, job availability decreased, all employment and livelihood structures were permanently altered, and wage arrears were rarely paid. Most were paid wages – if at all – in old notes. Few had saved notes to exchange: Majidbhai stated angrily: “We never have any extra cash, and we never have enough savings, then how were we supposed to exchange anything? Kuch hoyega to badlegein!” In fact, the informal financial sector appears to have been strengthened because of the policy of demonetisation, in direct opposition to one of the stated objectives. Vinod became agitated, recalling the rough time he had faced while attempting to exchange his meagre two Rs. 500 notes: “Koyi ameer mara kya? Koi Seth tapka kya? “

There was no money to pay rent or even electricity bills. Gaikwad was forced to vacate his house. Rendered homeless, he and his family lived on the streets for over six months, along with several of their erstwhile neighbours. Chitratai kept wiping off her angry tears: “I could not pay my electricity bill for more than four months after demonetisation, and now again for seven months after the pandemic. I cannot borrow money from neighbours and friends because we all face the same problem. Living in darkness for almost a year—has any leader ever tried it?”

Probably the single most distressing fall-out of demonetisation, reinforced by the pandemic policy response, has been the drastic decline in basic nutritional levels: missing meals for days; eating one meal a day; less frequent meals; cooking thinner pulses; making smaller and thinner rotis; rice gruel instead of normal cooked rice; non-fresh vegetables; increased water in gravies; sugar-less tea if at all; denial of biscuits to children, etc. etc. As Surajbhai put it rather despairingly: “if the Sarkar wants to completely annihilate the working class, it has to just close the PDS.” And for those who turned almost totally destitute, succour was provided by the langars of the Gurdwara’s post-demonetisation and by NGOs and other sensitive organizations, especially during the first wave of the pandemic. 45-year old Sujatatai says bitterly: “Decisions uncaring about the poor have stolen our izzat, the only thing we had. I have been a domestic worker all my life and have never eaten the leftover food given by my sethni. Now I have to stand in line to get food as charity.” A direct consequence of demonetisation as well as an uncompassionate pandemic policy response has been on the nutritional and health status of the working class, which has long-term impacts on not only the capacity to work but also the capacity to come out of poverty: the impact of low nutrition, as well as the inability to pay school fees, is on the quality of not only the present but even the future workforce.

Demonetisation and a pandemic policy that has not met the consumption needs of the majority of the people even after the second wave compelled the poor to sell whatever assets they owned: land, livestock, sewing machines, household items, utensils, mobile phones—the list is endless. An intriguing new collateral has emerged—that of the Aadhar Card and also of the Ration Card. Several kirana store owners insisted on retaining primarily the Aadhar Card as collateral for borrowings in kind, especially in the form of food grains. Desperation levels have been so high that particularly the asset-less workers have no option whatsoever but to agree to surrender their most valued identity possession. This is one of the most brutal forms of blackmail that has emerged, and one that can be viciously misused, particularly in the case of migrants and those belonging to the non-majority community.

What needs to be urgently recognised and visible is the massive and increasingly irreversible violation of human and gender rights: the immediate policy reaction whenever issues of gender-based violence are highlighted is what I term a ‘Municipality Response’. These issues are much more complex, particularly in the context of the redefinition of work and workers that are currently underway through dramatic ‘reforms’ being introduced in labour structures, both formal and informal, via the Labour Codes

The roots of violence need to be perceived within the macro-patriarchal construct of the State, patriarchal structures as well as the dominant growth paradigm combining and colluding to ensure that women and their rights are subsumed and subordinated. New ‘sites’ of sexual violence have emerged, all located in the labour-capital structures as a fallout of people-blind policies: privatisation of public transport, utter neglect of the rural sector, demonetisation, labour codes, farm acts, and pandemic policy. Sexual exploitation is being increasingly incorporated not only into employment contracts but also mobility patterns, all of which reflect the institutionalisation of gender-based violence, which is becoming normalised, actualized, and internalised. Acceptance of sexual violence has become the basis of getting work and is manifested in several ways: by ‘healthier’ women being selected for work; girls being employed in preference over older women; the re-formation of groups of women workers waiting at labour nakas according to ‘attractiveness’ and youth; and a blatant demand for women workers ‘who don’t mind drinking. The first few weeks after the announcement of demonetisation were so desperate that families were compelled to ‘sell’ their daughters and sisters for a few hours every day. These girls, several of them barely teenagers, were taken by family members to the gates of industrial units and estates, where deals were struck with the watchmen of these units, which had closed down due to lack of ‘new’ money. These watchmen, who now began performing the role of traffickers, bargained for a share, and the girls were sent to the Seth, the amount of money depending on the number of hours negotiated: the ‘rate’ for two hours was obviously less than the now illegal Rs. 500 notes.

With tears in his eyes and his voice choking with remembered pain, Pawar wept: “I cannot bear to look at my daughter……even though I was the one who took her to seths, and even though I fully appreciate the fact that without her selling her body, we would not have been able to have even one bhakri a day. I can smell the men on her body.”.

The appalling consequences of a senseless demonetisation without notice and an inhuman pandemic policy response including the most brutal lockdown on the majority of citizens of the Republic of India, cannot be more graphically explained than by the words of Ayesha: “The Sarkar does not want the working class anymore. Withdraw whatever little welfare is available today, digitalise it so that we cannot comprehend the technicalities, and by next year the roads will be full of the dead bodies of emaciated workers. And for women there will be no need to even wait for those 12 months – single women are half-destitute already. All we face is devastation, destruction, despair and destitution. We are the real NRI – Not Required Indians”.

(This article is based on field analysis conducted in the first few months after the pronouncement of demonetisation and has since been updated by several visits in the later years. For details and data, see ‘Demonetisation: From Deprivation to Destitution’, Dewan Ritu & R. Sehgal, Himalaya Publishing House, Mumbai, 2018).