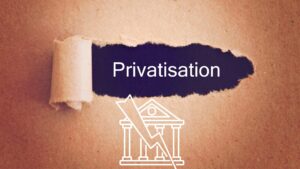 From 1991 with the debut of neoliberal policies we have followed the dictates of IMF, the World Bank, the Financial Stability Board (of G-20) and now even the World Economic Forum.

Due to the opposition from trade unions, political parties and the civil society, the governments have found dubious ways to make the Public Sector Banks behave like Private Banks. They have found ways to support corporates, write off loans, lose their business to private banks and get alienated from the people, the actual customers. So when the time comes to hand them over to the corporates, there will be no one left to mourn the loss.

The argument that public banks have reduced employee strength due to technology changes is a fallacy.  Private Banks also use advanced technology. The per-employee customers in Public Sector Banks is 5 to 6 times of the new generation of private banks. This has alienated people who complain of poor customer service and non-availability of credit, especially small credit.

India is one of the largest under banked countries with an average per branch population of around 11000. The North East and Central India have very few bank branches compared to the West and the South.

Unless these outlets are converted into bank branches of the service area bank, the customers are going to blame the banks. This will increase the bank employee strength by another 11 lakhs and credit outreach to rural and semi urban areas will increase tremendously.

This factor is also alienating customers from the public sector banks.

Banks were not allowed to lend to Non-Banking Financial Companies till 1999. After some time, on-lending through NBFCs was allowed. Banks could lend 10% of the advances to NBFCs. Now it is increased to 15%, making available around Rs. 75,000 crores more to them. Loan limit to a single NBFC has been doubled from Rs. 25 crores to Rs. 50 crores. RBI has now introduced co-lending, where the NBFC provides 20% and Banks provide 80%. The loan processing is actually done by the NBFC. So, the customers rely on them. This weans away people from banks and can lead to corruption as the NBFCs become modern day moneylenders. They can command what to produce, what fertilizers and pesticides to use, where to store and where to sell at what rate. The corporate NBFCs like Adani Capital will encourage loans only to their vendors and suppliers.

The corporates who were denied banking licence for valid reasons are given back door entry to banking through the co-lending model.

As per the RBI report, around 30% of the funds of NBFCs are from banks, and it keeps increasing. Even NABARD and SIDBI have started financing NBFCs. The corporates already in this field are Adani, Ambani (Reliance), Bajaj, Aditya Birla, Tatas, Mahindra & Mahindara, Kotak and many more.

RBI has cancelled the Licences of 5346 NBFCs for various reasons. Still there are 9358 running. In spite of their poor performance and misappropriation, why should RBI encourage bank finance to them and encourage co-lending model? Their exposure to agriculture is hardly 2%, but they are saying that this model is aimed to increase agriculture credit, as claimed by SBI during the co-lending deal with Adani. There has been widespread opposition to this and the RBI has been asked to stop this co-lending.

If that is not done, due to the shadow banking of these NBFCs who charge up to 24% interest (RBI paper has recommended removing this ceiling also) the poor and middle class will suffer in the hands of these moneylenders.

To allow workers participation in the Management, the Nationalisation Act made it mandatory to have one officer director from the Officers’ Association and one workmen director from the workmen employees. This was implemented meticulously from 1970 onwards. They played the role of a crucial watch dog. Through them, certain transparency was available in the Boards of Banks. They could give dissenting notes, participate in the lending decisions and question big write off decisions. After 2014, this Govt has stopped approving the recommendations of banks to appoint employee directors. Prime Minister’s Office has turned down as informed to the Delhi High Court.  The Law is violated, and Court order is ignored. This has made the Boards opaque and  has helped to change the public character of Public Sector Banks, alienating the people – the public.

The banks are making huge operating profit but due to provisions for large NPA accounts, the profits get reduced, so they have started looking for other avenues for increasing their income. Service charges have become a thorn in the flesh. Minimum Balance charges, ATM charges, inspection charges, annual maintenance charges, cheque return charges, cash handling charges etc. have been increased many fold from 1st Feb 2022. The customers from the low and middle income group are badly affected.  They start migrating to small finance banks, Paytm, Google Pay etc. and are alienated from Public Sector Banks.

Many of the Public Sector Banks have promoted subsidiaries which are registered as private companies where private shareholding is allowed. The employees do not have the same service conditions as bank employees, whose salary is revised through bipartite settlements, though reservation policy is applied.

Bank employees are forced to sell products of these subsidiaries, often annoying the customers and earning a bad name. Executives get promotions, gifts, tours etc. for encouraging cross-selling at the cost of loss of good will while the customers get alienated.

Micro Finance Institutions are for-profit companies who are the modern-day moneylenders, charging huge interest and using coercive recovery methods which have led to many suicides. On the other hand, Self Help Groups, initially promoted by the National Bank for Agriculture and Rural Development (NABARD) in 1992 are run by women guided by NGOs and service organizations. Their motto is service and not profit. They have almost 100% recovery rate and almost 95% of them are run by women.

Now RBI encourages lending to MFIs, and due to reduced staff strengths banks have reduced lending to SHGs. Banks are asking SHG Federations to convert themselves into MFIs.

Non-Performing Assets of Banks increased in 2014 due to change in Asset classification norms by RBI. From 360 days →180 days →90 days to 30 days non repayment of Interest / Instalment led to an increase in NPAs. Their attempt to make even one day default as NPA was stopped by the Supreme Court. The entire asset classification norm requires a relook. You have to segregate wilful defaulters and fraudsters from borrowers who have genuine difficulty. The NPAs have actually helped the corporates to get away with their loot.

The Insolvency and Bankruptcy Code which created National Company Law Tribunals has helped the big business and Corporates to get away with average haircut (actually write off) of 80% of the loan. The beneficiaries are again Corporates who take over these assets at throw away prices. The classic case is Anil Ambani’s companies that have taken over Mukesh Ambani’s companies with more than 80% haircut. Similar is the case of Vedanta taking over the Videocon group.

The Govt provides capital to banks to help these corporates through write-offs and blames the banks. The government is not willing to share the names of borrowers whose loans have been written off. Only the cases going to NCLT come to light. Even there, now a new model has been created in the form of pre-pack settlements. This has weakened the banks and alienated customers. The agriculture borrowers and housing loan borrowers are harassed with their properties taken away, while the corporates get a free pass. The ordinary customers blame the bank employees and banks instead of the masters who take these decisions.

Chairmen, Managing Directors, Executive Directors are allowed to join private companies after a one-year cooling period. Former Chairman of SBI, Mr. O.P. Bhatt is with the Tatas. Mrs. Arundhathi Bhattacharya is with Reliance. Mr. Pratip Choudhry joined an Asset Reconstruction Company and was arrested recently and left out on bail.  There are so many others! They can join 6 companies as Board of Directors. Joining a company to which loans were given by the same bank is a shame and a kind of corruption. They also wean away business from these banks to others. This practice has to stop as it spoils the name of the banks and alienates people.

There are more than 2000 Fintechs in the country.  Now only RBI has created a department to look after them. When loans are not available from banks, people move to NBFCs and Fintechs, many of which are operating without a banking licence. They call it open banking. They are into retail lending, peer to peer lending (p2p), salary-based lending, housing finance, consumer finance, gold finance and ‘take now pay later’ loans etc. We have Google Pay, Amazon Pay etc which are payment Fintechs with a wide reach. Payment wallets have also started facilitating loans. This was facilitated by the Unified Payment System India (UPI) which has allowed access to any account of any bank. If there are not monitored, the frauds will also increase. Big techs like Meta (formerly Facebook), Alphabet (parent company of Google), Amazon, Microsoft and Apple, called MAAMA have huge finance with them and are entering into new models of fintechs. The regular banks cannot compete with them with technology alone. They require more branches and more staff with whom the customers can interact easily and avail banking services.

It is easy to register a Nidhi Company. Earlier, they were called Mutual Benefit Funds.  Many of them collapsed and closed. Nidhis offer higher rate of interest and securitised loans. As banks have drastically reduced deposit interest rates, people are switching over to Nidhis in spite of the risk. The Interest rates in India, which is a savings-based economy unlike US which is a credit-based economy, have to be increased. This is also alienating people from Public Sector Banks.

Govt business which was handled only by SBI was extended to all public banks. Now every private bank is allowed Government business. This helps to mobilise deposits and provides access to more customers. The earnings and commissions also go to private banks.

Through so many dubious methods, the Govt has weakened Public Sector Banks and encouraged Private Banks. Many of them have more than 51% shareholdings of foreign investors and are waiting for the right moment to take over. The merger of 28 Public Banks into 12 has reduced branches, business share at the cost of Private Banks as per data available in the trends in Banking Report of RBI, though RBI does not talk about it. Between 2017 and 2021, public sector bank branches reduced by 3662 whereas private sector branches increased by 11601. The share of business of public sector banks has come down to 59.2% from 67.85%, whereas private banks increased their business from 24.65% to 32.20% within these 5 years.

It is time to look closely. Trade Unions have to not only analyse these facts, but also act. The customers have to be told what is happening. The policymakers and Parliament members must raise these issues. The Govt is giving up the role of a welfare state guaranteed by the constitution. The reservation policy is simply overlooked by encouraging private sector and privatisation in novel ways. In the longer run, the income inequality which has widened as per the latest reports of Oxfam as well as the Paris based World Inequality Lab will increase. Oligarchs will rule the country and people will become slaves unless they fight now.