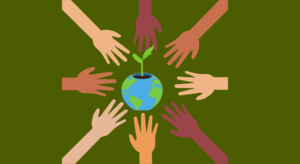 The youth of today are both the most optimistic and pessimistic generation. Some of us have given up and accepted the inevitable doom of climate change and certain others remain apathetic. Considering where they’re coming from, it could be everything that is happening around us, the pandemic, the war and fascist regimes in the context of all the commitments made to address climate change. Meeting the goals set by the Paris agreement remains a big challenge i.e. limiting global warming to 1.5 to 2 Celsius above pre-industrial levels. We are facing, extreme weather events, food insecurity, displacement and billions of dollars of losses. But the efforts to reduce carbon emissions and to be prepared to manage and mitigate the inevitable impacts climate change remains tokenistic.

Many developing and underdeveloped countries are the most vulnerable to climate change and extreme weather events, like Myanmar, Haiti, Puerto Rico and Bangladesh. India also features in the top 10. The adaptation funds needed by these countries are already around 70 billion per year, and will only keep increasing. Some of the biggest carbon polluters, however, are countries like the USA, China and Germany. There are also some countries like Iran and India on this list that are developing countries. But it’s almost like developed countries are reaping the benefits of economic development that comes with industrial production (and pollution) and leaving the underdeveloped countries to deal with the consequences of excessive carbon emissions. The help they’re offering simply isn’t enough.

Renewable energy is hailed as a saviour and eco-friendly alternative to conventional energy sources. This is largely true, but many cons seem to fly under the radar. Tidal generators can be destructive to wildlife. Marine animals could swim into the blades and die, and it also causes flooding in the local environment. Windmills also face similar problems, with birds crashing onto the blades. They may also cause excessive noise pollution. Solar panels and windmills occupy a lot of lands that may clash with agricultural or pastoral land.

Increasing disparities in developing countries is a critical concern in the context of climate change. Well-off urban people sit in their air-conditioned rooms, ride their luxury cars and face no limitations in water supply, while the marginalized suffer from impacts of low rainfall, failed agriculture, lack of food security and more. Women and children often have to walk far to fetch fuel and water. The poor are disproportionately affected by climate change. During heatwaves or floods or droughts, the rich can afford to escape to more safe places, or they already live in well-built places that can withstand these disasters. The poor, however, have no choice but to stay where they are and struggle to make a living. Early warning, evacuation, resettlement and rehabilitation are often very far-fetched and often have to restart their lives from scratch. The International Panel on Climate Change (IPCC’s) Fifth Assessment Report states that many regions of Asia will experience a decline in food production and security. The same report also states that extreme climate events will have an impact on health, poverty and livelihoods. An increase in rain and temperature will lead to the rise of diseases like malaria; floods and droughts will hurt the production of rice.

A lot of people, though, just seem to don’t care. They feel almost disconnected from these problems, either because they are so caught in their everyday struggles to make ends meet or they are too comfortable to be bothered about climate change and its impacts. The first step is to acknowledge that climate change is very much a problem of the present and is already having devastating impacts. The mantle falls on people who have been elected to initiate action and ensure everyone is safe. There are more than enough existing legal provisions if one intends to bring in positive change. Youth needs to be informed as knowing more about this issue could help one understand the gravity of the situation, as well as comprehend responsible energy usage.

Reading about how energy is produced, transmitted, consumed and knowing just how important energy is for everyone’s survival should be a priority. Understanding who finances energy projects and how finance flows is a crucial aspect of understanding energy production and supply. It is even more important to understand who benefits and who loses? Energy production often comes at a great cost of displacement, loss of land and livelihoods and human rights violations. It is crucial for today’s youth to appreciate and engage with the ongoing discussions and debates in the country and globally.

Sustainable development and the Sustainable Development Goals (SDG) agreed upon by governments and the Paris Agreement are of utmost importance. The last two years have slowed down much of the progress due to the pandemic, and it will surely take a long time for processes to bounce back. With only 8 years left till 2030, the year we are supposed to meet the SDGs, it is necessary to identify the weak points of every country through the national reviews and develop personalized plans to overcome these. SDG 7 is about energy equity; clean and affordable energy should be available to all.

An important step for youth must be to pressurize big corporations to operate sustainably and demand that all investors invest in environmentally and socially just projects and further ensure they invest genuinely in locally relevant climate adaptation and mitigation strategies. The world wakes up to another important day in April. Earth Day was first observed on 22nd April in 1970 in response to the increasing pollution then. We have come a long way and we are now at a historic point to make things better and make this earth habitable and livable for all. This year’s theme is “Invest In Our Planet“. Investing should not necessarily mean investing money in irrational projects that claim to solve the challenges of climate change. Investments must first be made in efforts to understand local problems in the transitions that are taking place rapidly, especially in the transitions to renewable energy that are causing difficulties to marginalized and vulnerable communities.

The term must also be read as everyone investing genuinely, ethically and morally to ensure we reduce emissions, and shift to sustainable and ecologically just ways of living. It is also important for every single person to have a say because this is a problem that humanity collectively faces. Access to information and participation should be of utmost importance in this investment to collectively address this challenge. Only then, we might have a glimmer of hope. Like a light at the end of the tunnel.

Drishya Subash is a 12th standard student at Delhi Public School, Bangalore and is interning with CFA.