The onslaught of a new power plant on the fragile ecology of the Sunderbans is fresh proof of the futility of climate reforms. We bring you a ground report. 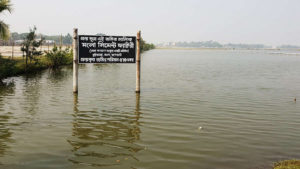 Until two years ago, 28-year-old Sajjad Hossain Tuhin, a student of forestry, would walk up to the banks of the river Rupsa in Khulna, Bangladesh, to capture the moment of dusk, when the setting sun left the sky lit up like fireworks. In romantic Bengali literature, it is described as the moment to catch a glimpse of a new bride.

But Tuhin doesn’t do this anymore. The sun now sets behind the boundary of an upcoming LNG power plant. The banks of the Rupsa are astir with vehicles ferrying rocks and cement to speed up the completion of the plant that will fire up Bangladesh’s economic growth.

In December 2018, as political leaders haggled at the European city of Katowice, Poland, over the Paris rule book on cutting carbon emissions, the Bangladeshi towns of Khulna and Mongla were gearing up to establish the largest fossil fuel-led energy projects of south Asia.

In these towns, which are also the gateway to the world heritage Sundarban forests, shrimp farms are being replaced by LNG refineries, and paddy fields with coal-powered plants. The Ganges delta, where the Sundarban sits, is slated to become the river route to transport natural gas and coal.

All this is part of Bangladesh’s effort to reduce its dependency on garment exports by making energy one of the pillars of its economic growth. The World Bank predicts that by 2030, electricity demand is expected to grow to 34GW, more than double the country’s current installed capacity. To keep up with the demand, in the next five years Bangladesh expects to launch 19 coal-based power plants with the help of investments worth nearly USD20 billion from China and India.

The story of the economic ambition of least developed countries (LDCs) like Bangladesh is testimony that polluting technologies are here to stay, making the Paris Climate Agreement inadequate to tackle global warming. In the absence of funding commitments towards a greener transition, for countries in the Global South, economic aspirations and geopolitical rivalry are a far higher priority than tackling the looming threat of climate change, despite these countries being on the firing line.

At Rampal, a village 14 km off the Sundarban forests, four-lane roads are being dug up by construction lorries to make way for a 1,350MW power plant, a joint venture under the Bangladesh India Friendship Project. Linked to the Mongla port, Rampal is expected to light up the entire upcoming industrial belt around the region, and holds the key to Bangladesh’s leap out of the LDC group. It is also a strategic investment for India as it strives to keep its influence intact — and immune from China — with its closest ally in the subcontinent.

Meanwhile, environmental groups are convinced the power plant will destroy the pristine ecology of the Sundarban mangroves, which act as a natural cover against the frequent cyclones and flooding that the Bay of Bengal brings. A drive from Mongla port to Rampal reveals why the environmentalists are edgy. On one side are lush green paddy fields, mangroves, and banana trees that are distinct to the Sundarban ecology. On the other, are giant gas cylinders and cement factories eating up the green cover.

“The Sundarbans are a different [kind of] forest. If [something] happens on one side, it happens on all sides,” says Abdullah Harun Chowdhury, a professor of environmental science studies at Khulna University.

The Rampal plant, which will be constructed on 1,800 acres of land, is expected to generate 3,700,000 tonnes of carbon dioxide. This is as much damage as cutting down 161 million trees. It will also bring 10,000 tonnes of sulfur dioxide, which causes acid rain that damages forests, lakes, and buildings, and forms small airborne particles that can penetrate deep into lungs, Chowdhury adds. He warns that the power plant will destroy the Sundarban flaura and fauna. Besides being home to the Royal Bengal Tiger and the Irrawaddy Dolphin, the forests are also the nesting grounds of nearly 200 species of birds.

Chowdhury also fears loss of employment due to the project as more than 500,000 people are directly and indirectly dependent on the Sundarbans for their livelihood.

Asking for too much?

The idea of the Paris Agreement was to nudge countries to cut their greenhouse emissions, helping keep the global temperature from rising above 2°C. The first sign of trouble on the future of the agreement came when US President Donald Trump walked out of the deal. At the Katowice talks, Russia, Saudi Arabia, and Kuwait, the world’s leading oil producers, refused to commit to the Intergovernmental Panel on Climate Change’s (IPCC) road map on cutting carbon emissions. Yet, the expectations are high on smaller countries like Bangladesh to keep the pledge going.

Bangladesh is one of the most densely populated countries in the world, and one of the most climate vulnerable. Global delivery on the Paris Agreement is critical to Bangladesh’s prosperity, and even survival, says Tim Buckley, director of the Energy Finance Studies at the Institute for Energy Economics and Financial Analysis, a think tank. He adds that the country is caught in an unwinnable dilemma as its continued economic growth is reliant on expanded energy access, even as its already limited fossil fuel reserves diminish further.

“It is not that Bangladesh government does not know the damage that these fossil fuel power plants will do to its ecology, but they are taking this risk. Most governments [follow this philosophy], that environment impact can be [lived with] if it gives money,” says Soumya Dutta of Beyond Copenhagen Collective, an environmental non-profit. “You haven’t seen India, China, or other countries give priority to the environment over economics. How can you expect Bangladesh to do it?” Dutta asks.

In the last decade, the Sheikh Hasina-led Awami League, battling the perception of running an autocratic government, has managed to increase its exports, maintain 7% GDP growth, and improve per capita income. Even though funding from the West has dried up for fossil fuel-led energy projects, Asian giants like Japan and China have stepped in to fill the gap.

“The idea is simple. Now you can stop coal plants in your own country, but go about polluting smaller countries”, says Hasan Mehedi, founder of the Save Sundarbans initiative.

The Green Fund that wasn’t to be

The only way poorer countries can be convinced to transition to greener growth is by compensating them. This was one of the strong pitches that LDC representatives had made in the Katowice talks.

The Green Climate Fund, based on the idea that rich countries will fund poorer countries for transitioning towards climate-resilient and low-emission projects, was floated in 2011, but it has remained on paper with no commitments coming through from the West. What began as an aid package was re-spun as loans, and now the responsibility has been pushed to private corporations.

The record of rich countries in their contribution to the Green Fund is extremely unreliable, Dutt of Copenhagen Collective says. “No country will be able to [take] a decision [based on the hope] that we will get USD10 billion, so let’s try and change our energy system to renewables,” Dutt adds.

Coal is dead. Where to dump it?

Anticipating the emission cuts under the Paris Agreement, investors have started pulling out of thermal projects. Rating firm Moody’s has estimated outstanding debt worth USD517 billion that companies involved in coal mining, terminals, and unregulated utilities and power companies have accumulated over the years. Even India and China, with the highest concentration of thermal power plants, are retreating from coal, as prices to generate renewable power have fallen.

“In the absence of a lucrative home market for coal-power plants, these countries have made Bangladesh the dumping ground for their resources”, says Anu Muhammad, an economist.

Considering Bangladesh is in the crosshairs of the India-China rivalry and needs international support for its economic reinvention, it is giving in to the demands of its powerful neighbours.

“But either way, Bangladesh will suffer,” Muhammad concludes.

Divya Rajagopal, the reporter, was the recipient of the Smitu Kothari Fellowship. The article, first published by the Economic Times, can be accessed here.