Name of the publication: Gang of 20

*This comic book is published by the Centre for Financial Accountability, with support from the Heinrich Böll Stiftung Regional Office in New Delhi.

About the comic book-

An enormous venue has come up on the banks of the Chaipani lake. Decked up with the best in class amenities, the leaders of the world and the international press have accumulated to witness the grandeur and vanity on display for the G20 (Gang of 20) Annual Meetings. There is tension within the venue in anticipation of the common beasts traveling the length and breadth of the country to register their protest for the lack of imagination, commitment and action shown by the Gang of 20. Irrespective, deceptive games continue inside the venue while the masses confront the new reality. “Inquilab Zindabad” echoes as the herd settles outside the venue and the supreme leader has been informed of the anti-national threat. The crackdown has begun. But this time it is different – the farmers, the working class, students, refugees and the marginalized are UNITED! Ready for one battle at a time.

To receive a print copy –

Write us an email at info@cenfa.org

What are people saying about the book?

“Profit, power, and privilege cannot see anything other than the bright, digital lights of their bank details, the money sloshing in, the precious social wealth captured from the many for the few. This timely comic provides a glimpse into the callous dullness of world leadership. It tells us that we need something better. Oxygen, perhaps, rather than the stale air of air-conditioned nothingness.”

“This comic effectively exposes the pomposity of power, and the inevitability of resistance. It represents satire at its best.”

Orijit Sen is a graphic artist, muralist, cartoonist and designer based in Goa, India. He is a co- founder of People Tree – a collaborative studio and store for artists, designers and craftspeople. Orijit is the author of River of Stories (1994), considered to be India’s first graphic novel. In 2021, Orijit launched Comixense – a comics quarterly for young readers – in collaboration with Ektara Trust, and is its Chief Editor. He also teaches comics and graphic art, and has been Mario Miranda Chair Visiting Professor at Goa University as well as Visiting Professor at the Visual Arts Department of Ashoka University.

Sonal Raghuvanshi is a political economy researcher. Her research looks at the role of finance in development (critically engaging with international financial institutions) and macroeconomic policy in developing economies alongside a critical engagement with the economics discipline. She is also an associate editor with a heterodox economics journal and an organizer with various progressive student groups and movements.

Samarth is a graphic novelist and researcher. His first graphic novel – Suit, was published by Yodapress in January 2022. His work, so far, has been a means for him to study and interpret socio-political relationships. Over the last 2 years he has also been working in the social and development sector, building learning experiences for secondary school students. Most of his independent work happens before and after work hours.

Read this in Hindi here. 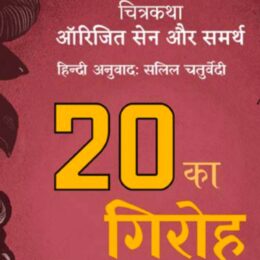