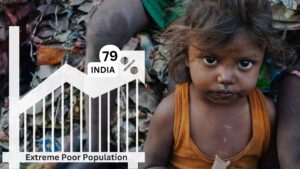 The World Bank’s latest poverty estimate delivers shocking news: India added a whopping 79% of new extreme poor to the world population in 2020. In absolute numbers, it says, the global population of extreme poor grew by 71 million and India added 56 million to this.

In this estimate, extreme poverty is redefined as per capita per day expenditure of $2.15 (earlier $1.9) based on 2017 PPP (purchasing power parity). As for estimating India’s new extreme poor, here is another shocker. It used “new household survey data” of a private entity, the Centre for Monitoring Indian Economy (CMIE), not the official data. That is because India simply doesn’t have official data on household consumption expenditure (proxy for household income) after 2011-12.

The CMIE data was, however, used after suitably adjusting it to the official National Sample Survey (NSS)-type consumption measure – last collected in 2011-12. There indeed was an NSS for 2017-18, but its data was junked after a leaked report revealed that “real” household expenditure had fallen for the first time in four decades. This wasn’t surprising, given that it came soon after the twin shocks of demonetization and GST. Besides, the economy was slowing down in the end years of the previous UPA-II government.

It is quite ironic that after becoming the fastest growing major economy in the world, first in 2015 and then in 2021, and then the fifth-largest economy in 2022 (on the basis of Q1 of FY23 GDP size), the Indian government has shied away from collecting household expenditure data (proxy for household income). Quite apparently, it has a lot to hide – the contrarian nature of the GDP growth. That India’s high GDP growth has accompanied even higher inequality growth is no secret. The benefits of high growth (income and wealth) have gone to the top – the top 1% and the top 10%, at the cost of the middle 40% and the bottom 50%.

The World Bank’s latest poverty estimate for India is quite in line with other global estimates published earlier too, the closest one being the US-based Pew Research Institute’s March 2021 report – before the far more devastating second wave hit India. The Pew report revealed that India had added 75 million extreme poor (per capita per day expenditure of $2 or less, at 2011 PPP) in 2020, contributing to 57% of the global increase in extreme poverty – 131 million. This estimate was based on the NSS’s 2011-12 data.

Another remarkable feature of this addition of extreme poor in India is that the pandemic disproportionately hurt India. The World Bank database shows, at $2.15 level, India’s share of extreme poor in the world was, on average, 26% in the previous five years (2015-19). But when the pandemic struck, India’s share jumped to 79% (as per the World Bank’s 2022 estimate) or 57% (as per the Pew’s 2021 estimate).

The moot question, therefore, is why this happened. Why was India hurt disproportionately? Here is a clue. In 2020 (equivalent to India’s FY21), when the global output growth fell to -3.1%, India registered a far sharper decline at -6.6%. Little inquiry has been made by the Indian government to find the answers.

This writer has been long arguing that the fundaments of the economy were broken by a series of man-made economic disasters – starting with the dismantling of the Planning Commission to demonetization and GST and then gross mismanagement of the pandemic. While the dismantling of the Planning Commission opened the space for top-down, arbitrary and self-serving policymaking – which worked in the interest of private businesses – the other three events directly caused overnight loss of millions of jobs, small businesses and lives – producing mass poverty. When the masses become poorer, the demand dries up and the real economy (which the stock market isn’t, for example) shrinks. There is adequate evidence of this.

In FY22, when India registered 8.7% growth to become the fastest-growing major economy again, the private consumption (PFCE) was barely 1.4% above the pre-pandemic FY20 level; the per capita GDP was actually lower by -0.5% (of the FY20 level). Now, as the threat of global recession grows with every passing day and India’s FY23 growth is pared down by the World Bank from 7.5% to 6.5%, India is banking on festive sales to boost growth. But here is a dampener.

According to UBS Securities India, the consumption is being driven by the top 20% – 59% in rural areas and 66% in urban areas; the majority of Indians are yet to recover from the pandemic shock. This is based on its survey last August.