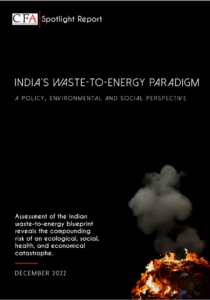 Over the last few decades, the volume and toxicity of waste being produced in India have been increasing exponentially. A major cause has been the increased use and disposal of more manufactured materials by industrialised societies than their predecessors and less-industrialised societies. Further, rapid growth in the human population has been increasing the total waste produced; with greater population densities in urban areas, there is also a higher concentration of waste. According to the 2014–15 Niti Aayog Annual Report on waste-to-energy (WTE) technology in India, an estimated 62 million tonnes of municipal solid waste is generated annually by only the urban areas in the country. This number is expected to rise to 165 million tonnes by 2031 and 436 million tonnes by 2050. This does not come as a surprise because waste is visible all around us, in unregulated dumpsites spreading a variety of diseases, clogging drains and gutters, burning in piles or littering the streets. Government efforts to manage the prevailing waste crisis have not focused on holistic, long-term solutions that address the root causes of overconsumption and use of unsustainable materials; instead, governmental programs targeting waste have centred around large-scale projects that have left more problems in their wake than solutions. WTE technology has been one such unreliable and specious solution. WTE projects are being aggressively promoted by government and private entities that stand to benefit from the installation of such WTE plants. WTE plants are designed to burn municipal solid waste as a form of waste processing and sometimes generate electricity. This technology found its way to India after being contested by the people of several countries on grounds ranging from health risks, environment and loss of livelihood. Despite this, the Indian government has funnelled large sums of money into the promotion of this technology, by hailing it as a form of renewable energy and an efficient method of waste management.

This report documents and analyses the existing and upcoming WTE plants in the country and the financial, social and environmental impacts of their development. The last decade has witnessed the rapid establishment of WTE plants across the country. Urban local bodies have released and re-released tenders for these plants, even if contracts have been violated by concessionaires. This is accompanied by the ever-increasing list of government schemes and policies that provide financial incentives for setting up of these plants. The stage is set for India to host more than a hundred WTEs. This means that efforts to regulate, research, and stop these plants must also accelerate.

India, as a country, needs to reject WTE technology and focus on alternative solutions to the waste problem. Several municipalities in India have successfully adopted zero-waste models and proven that decentralised waste management is the only sustainable route to managing waste. Large-scale implementation of zero-waste models must be accompanied by the diversion of governmental impetus and investment away from destructive proposed solutions like WTE plants. The purpose of this report is to document and analyse the WTE landscape in India and make an effort towards building a knowledge base that can factually challenge the industry’s narrative of WTE plants in the country as an effective solution to the growing waste crisis.