In FY18, the last year for which disaggregated income tax data is available, only 29,002 ITRs declared income above Rs 5 crore, while Credit Suisse said India had 7.25 lakh dollar millionaires (the wealth equivalent of Rs 8 crore and above) that year. 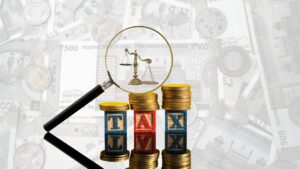 Do such claims have any basis in official records? The answer is unequivocal.

Despite the claims of higher-than-expected direct tax and GST (indirect tax) collections in the past few months, this is unlikely to happen because the data provided by the Controller General of Accounts (CGA) up to October 2022 reveals that until October 2022 (from April 2022), the realised tax collection is 60.5% of the budget estimate—significantly lower than 68% in the corresponding period of FY22.

What about income tax (direct tax)? This is key to explaining “tax buoyancy,” which the RBI official brought into the picture.

For taxation to be buoyant, the increase in tax collection should be greater than that of GDP. This is a common occurrence (having a tax buoyancy greater than 1). Shockingly, income tax data is available only up to FY19 (disaggregated data is available only up to FY18 or AY19). It shows that tax buoyancy was 0.8 in FY16 (pre-demonetization), increased to 1.1 in FY17 and 1.59 in FY18, and then fell to 1.21 in FY19.

In the absence of data for FY20, FY21, and FY22, no definite trend can be identified. However, a few things can be said about the data presented above.

Both the tax-to-GDP data and the tax buoyancy data show there is an improvement in FY17 and FY18 and then a fall. This can be easily explained: the government ran “Income Declaration Scheme” in 2016 and 2017, allowing people to disclose undeclared income; the demonetization brought cash at home to banks, revealing some undisclosed income and the need to file ITRs and the GST entailed hitherto informal enterprises to avail relief from the cascading effect of multiple indirect taxes by shifting to the GST and benefit from the “input tax credit” built into it.

The subsequent fall in FY19 could be partly explained by the “dropped filers”—the ones who dropped out after having filed ITRs to declare their undeclared income in FY17 and FY18—and also by the economic slowdown that hit (the GDP growth slipped to 3.7% in FY20). Dropped filers are a well-known category of taxpayers in tax parlance, distinct from “non-filers,” who avoid paying taxes and do not file ITRs.

Thus, before making any definite claims of higher tax buoyancy, the income tax data for FY20, FY21, and FY22 should first be made public to know if the disruptions caused by the demonetization have stabilised into a pattern or not.

What about the expansion of the tax base—another frivolous claim associated with the demonetization?

But these numbers are meaningless without taking into account growth in population or employment. The tax data also shows an average of 2% of ITRs are filed disclosing “zero” income and paying “zero” tax. Then the fall in growth of ITRs in FY17 (as against the rise in the tax-to-GDP ratio and tax buoyancy numbers) needs explaining, which the ITD doesn’t do.

There are many more problems with the tax data.

Detailed or disaggregated tax data is available only up to the assessment year of 2018–19 (AY19), that is, until FY18—nearly five years too old. These data don’t even answer the most basic and simple questions: how many people actually pay income tax in a given year and what are their income levels?

All one gets to know is how many ITRs were filed and what income levels these ITRs revealed. The government surely has much more information, and this isn’t about “dropped filers” or “non-filers”—both of which are tracked routinely too. Senior citizens over the age of 75 who do not need to file an ITR but pay tax (banks, for example, deduct tax on interest earnings) or many who have had their tax deducted at source (TDS)

So, what does the disaggregated annual tax data reveal that can be of any use? There are three takeaways:

How many ITRs declared income of Rs 8 crore or more in FY18—the last available data?

Those declaring income above Rs 5 crore (in FY18) were 29,002—just 4% of the dollar millionaires that year!

One question that has bothered many is why the Indian government is reluctant to make income tax data public.

Here is a little background.

French economists Lucas Chancel and Thomas Piketty, who studied income inequality in India and are the only ones known to have used tax data for their study, disclosed in their 2017 book “Indian income inequality, 1922-2015: From British Raj to Billionaire Raj?” that India stopped publishing income tax data in 2000 and that “it was only in 2016 that the Income Tax Department released tax tabulations for recent years (2011-12, 2012-13, and 2013-14).” For the record, India first introduced the Income Tax Act in 1922 (during British time).