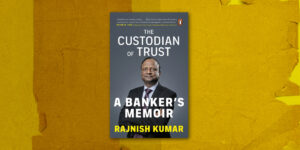 “The Custodian of Trust: A Banker’s Memoir” resembles “Not Just an Accountant: Diary of the Nation’s Conscience Keeper” by Mr Vinod Rai. Surprisingly Mr Vinod Rai has apologised for some of his earlier comments now.

The book by the former Chairman of SBI is very different from “No Regrets” written by another former Chairman, Mr. D.N. Ghosh. It’s an interesting and quick read. Beautiful comments on the book cover by Ratan N. Tata, Mukesh D. Ambani, and Uday Kotak appreciating the book published by Penguin vividly indicate the side he has taken.

The book is worth reading to know how the public sector banks, the RBI and the Ministry of Finance deal with banking. How they create a crisis and try to manage it. I am trying to analyse the book as a banker, but a banker who stands for the other side – on the side of the people.

I have great respect for the SBI and Mr. Rajnish Kumar, with whom I have interacted as the President of All India State Bank Officers’ Federation. He inaugurated the Unity Enclave Housing Complex at Chennai constructed by SBI Officers Association with 1800 flats and honoured us. My comments are not personal but based on the policy perspective.

This is not a book review!

Now, coming back to the book, let me start with Human Relations Management. The author writes,“ an impeachable character and strong willpower of the staff at the State Bank of India to perform their duty in the most adverse circumstances. This book is a tribute to this spirit.”

It’s true, and I thank him for the acknowledgement. When Mr. Rajnish Kumar took over the staff strength was 2,68,705, and it came down to 2.49 lakh as of March 2020. In spite of that, the Chairman announced a ‘Voluntary Retirement Scheme’ in September 2020 just before his retirement in October 2020 for the officers and the employees above the age of 55. This he doesn’t mention in the book. As stated in the book he was to retire at 60 and just before 3 months he was made the Chairman, giving him a three-year extension of service. VRS was a wrong HR decision. Fortunately, the next incumbent and the present Chairman did not implement the VRS scheme which would have reduced the staff by 30190 employees.

The biggest challenge I see in the public sector banks is the shortage of staff, leading to customer dissatisfaction and poor work-life balance. The Officer’s Federation has recently written a detailed letter on work-life balance in SBI. In his first letter to the staff, which is reproduced in the book, the author talks about work-life balance and the Objective Performance Management System. He writes that when the union leaders came to me to congratulate, I told them clearly not to worry about anything.

But unfortunately, adequate measures have not been taken. The decreasing staff strength is a major issue. The Performance Management System called the Career Development System developed by Boston Consultancy Group is totally flawed. The Association called it a ‘Career Destruction System’ and made a detailed presentation to the management with suggested alternatives, but they were not implemented. Today the performance is digitally analysed by the CDS score, but for promotion, another performance appraisal is obtained from controllers. As many banks follow what SBI does, SBI has a greater responsibility. A total review of this system is needed.

Further, the author writes, “Now it was time to dust off the cobwebs and refine these goals into a cogent framework for action. And at the heart of this endeavour would lay my aspiration to nurture human resources at SBI and make them grow exponentially with every milestone achieved by the bank.”

As you can see, he began by promoting work-life balance, how did the matter of cobwebs come in? What are the Boards doing? He was already a member of the Board as MD. Why even now the officers federation is crying for work-life balance?

Still, why is there a lot of employee dissatisfaction? One, in all these exercises the Association and the Unions were not actively involved. There was a time both were seen as partners in progress. When the market share of the bank was going down, there was a famous Jodhpur Conclave where the Officers Federation and Staff Federation presented a detailed way forward. They signed an appeal to the staff along with the Chairman. It helped the bank to make a turnaround. Mr. Rajnish kumar mentions in his book that the unions have become weaker after the introduction of technology. Looking at the unions with this attitude itself is wrong.

I feel it is because of this attitude that now in all the new initiatives, they are not consulted in advance. The results of a Management Survey and Officer’s Federation Survey on CDS were very different. The employees don’t trust that their critique will be taken positively by the seniors – the executives. We have seen this happening. The Federations are more matured. Both have talented people. We have presented detailed alternatives to the management, but if the government and the Chairman believe the BCG and Mckinsey more, then there will always be a gap. BCG calculation on man power planning had a basic mistake. They had taken 8 hours as working hours, whereas banks work for 7 hours with a half an hour lunch break.

I have asked this question a few times to the management- has the State Bank become too big to govern? The reorganization with IIM Ahmadabad study and recommendation was a success. But not that of Mckinsey and BCG. Informal feedback will be far better, not direct but through the federation.

Our feedback on the bank charges increase was not taken seriously by the two Chairmen. But the present Chairman has realised and removed the minimum balance requirement. Recently, in a meeting, a lady working among slum dwellers termed the bank ‘Garibhi Virodhi’ because of the high bank charges.

The present Chairman Mr. Dinesh Kharra has introduced compassionate appointments instead of cash compensation mentioned in the book.

Mr. Rajnish Kumar provided a small subsidy for retirees insurance whereas for executives from Chief General Mangers and above there is a 100% medical reimbursement from the bank, not insurance. This should have been provided to the subordinate staff retirees who cannot afford huge insurance premiums.

There are many lessons to introspect.

More in the next part.