Dishonest to say that NPA crisis is due to the default in agricultural loans: Prof. Prabhat Patnaik

New Delhi, January 13, 2018: “It is incorrect to say that the rise in non-performing assets is due to that of social responsibility of the banks as 75 percent of the NPA is due to the corporate default,” said Prof Prabhat Patnaik at the release of the draft titled Indian Banking: Present Day Challenges and Alternatives for the Future.

Elaborating his argument, the renowned economist who also released the draft report said that after 1991, the institutional loans to peasants has considerably shrunk, which is reflected in the data on NPAs. He further said that the chunk of the NPA is pure loot, in which the corporates have used the money somewhere else. To substantiate this claim, he said that 75% of the corporate default, which is 56 percent of total NPA, is the result of spending the loan on something else.

Advocating strong punitive measures, Patnaik demanded: the list of defaults be made public; an inquiry of each default be made; doing away of the limited liability clause to recover money from corporate defaulters, especially the willful defaulters; ensuring democratic control over banks by oversight by parliament and bank employees.

The release and the discussion on the draft-report was organised by All India Bank Officers’ Confederation, Economic Research Foundation and Centre for Financial Accountability in the context of the challenges being faced by the Indian Banking. The challenges include the push for privatization of the public sector banks; absence of dedicated development financial institutions; deviation from priority sector lending; the inability of the banks to achieve the financial inclusion in the true sense; rise in the NPAs; and the introduction of the FRDI Bill.

Speaking at the occasion, P.S. Rawat, former Executive Director, Managing Director and Chief Executive Officer of the Canara Bank, said that NPA is a result of over-leveraged on the bank’s books.

Emphasizing that in solving NPA mess, viability question of the bank has to be looked into, Rawat mentioned that 11 out of the 21 Public Sector Banks are under Prompt Correction Action, which raises serious doubts on their capability of raising money from the market. He said that in the situation of not being able to raise money, they would either be merged or closed down due to lack of operating capital. 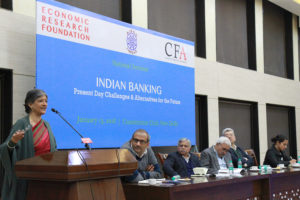 Speaking at the occasion, draft’s co-author Jayati Ghosh said because of the onslaught of the neo-liberal policies, the public sector banks have started functioning like the private banks. She said, “The public purpose needs to come back to the public banking.”

Prof. C P Chandrasekhar, another co-author of the draft, emphasized that financial liberalization has been a failure. He exhorted the bank unions to challenge the neoliberal policies to save the Public Sector Banks.