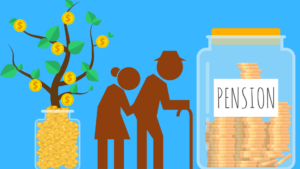 Our country’s constitution talks of equality, equal opportunity and social justice.  But unfortunately, even after 74 years, we lag far behind in social security.

The organised workers who form just 3% of the total workforce in the country get contributory provident fund, gratuity, and pension. Even their provident fund contribution of the employer is taken away, except in the case of the State Bank of India. Only the employees are allowed to contribute to PF now.  This was taken away with the introduction of the New Pension Scheme in 2012/2014 for various sections of employees. The New Pension scheme is being criticised as ‘No Pension Scheme’ as there is no assured return in it.

The government is treating bank employees as second class citizens. For 36 years, the government has not updated their pension. Because of this, a retired Deputy Managing Director of a Public Sector Bank who retired 10 years ago gets less pension compared to a manager who worked as an orderly for him but retired recently.  The problem is, for the central government whenever the Pay Commission Report is implemented, the pension is also revised. Still, the pension will be only 50% of the employee of the same scale who is still in service.

This is based on ILO conventions, struggles and various Supreme Court judgements which have categorically spelt out that the pension is not a bounty or gratis but a deferred wage. It’s provided to maintain basic necessities and dignity of life, no employer (including government and banks) can say that they have no capacity to pay it, and the quantum should be 50% of the last drawn pay scale.

So whenever the pay scale is revised, pension gets revised for Central Govt employees but not for the bank employees who have bipartite settlements in lieu of the Pay Commission.

Recently the Parliament Standing Committee on Assurances headed by Shri A. Navaneetha Krishnan MP has gone into the issues and recommended, excerpts of the 75th report of the Parliament Standing Committee on Govt Assurances. The Committee appreciated the Indian Banking System in the country, which has been working on strong fundamentals and functioning very smoothly and efficiently. However, the Committee also expressed its concern regarding the problems of pension of retired employees. The Committee noted that the pension of retired employees had not been revised in 30 years and requested the banks to look into the issue on humanitarian grounds and make efforts to address the concerns of retired bank employees. Regarding the family pension, the Committee desired that an Implementation Report may be submitted in the prescribed format.

Similarly, SBI employees are struggling to get 50% of last drawn pay as a pension, as there is a ceiling of 40% after a certain scale.

When we compare the Pension Systems across countries, the Netherlands ranks first and India ranks 34 among 39 countries assessed (See Chart). The US which is ranked 18th on the list has a provision for pension under the Employee Retirement Income Security Act which covers 94% of the population and the rest are covered under the Social Security Administration. That means 100 % of the citizens have pension security. For the 94%, it is $3345 equivalent to Rs 2,55,178. That’s why people want to go to the US and other western countries.

Another important social security is healthcare. In a report called ‘Best Health Care 2022,’ India doesn’t find a place. Among 34 countries ranked under ‘Countries with Universal Govt funded Health Systems’, India has no place.

In India, reimbursement of medical expenses was available for the employees of the organised sector. When it was proposed to shift to an insurance scheme for Central Govt employees the IAS, IPS Officer retirees opposed it and the idea was shelved. But for banks and the public sector employees, an insurance scheme was introduced, for which the retirees pay a hefty premium. The employers have escaped their responsibility. Now there is an overwhelming demand to restore the old reimbursement scheme with improvements, as health expenses have become alarming.  If the government provides free quality healthcare as done in many countries then there won’t be a demand for reimbursement.

The people working in the unorganised sector, the 97% are the worst off.

They have the option of the Atal Pension Yojana, in which if you pay a minimum premium of Rs 48 per month for 22 years, you get a pension of Rs 1000 per month.

Under Pradhan Mantri Shram Yogi Maandhan Yojana, you contribute Rs.55 to Rs. 200 to get Rs. 3000 as pension at the age of 60. The same is the case with National Pension Scheme.  In both of these schemes, the government contributes a 50% premium.

The National Social Assistance Programme provides a monthly pension of Rs.1000 to 3000 and is paid based on the contribution of the State.

Social security in terms of pension and medical care is dismal in our country. The government has much to do to fulfil the promises of the Constitution. We need to learn from other countries and provide free education, health care and pension for a dignified life. The Public Sector as a model employer has to show the way to the unorganised sector.