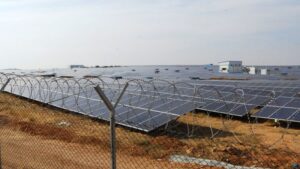 India is aggressively promoting the growth of renewable energy in its quest to be a global leader on climate action, but it continues to ignore concerns about the social and environmental impacts of promoting renewable energy megaprojects.

The impacts on community livelihoods and societies is being documented in regions with solar parks such as Bhadla in Rajasthan, Charanka in Gujarat, Rewa in Madhya Pradesh, and Pavagada in Karnataka. Concerns about environmental impacts are being raised too, and in this essay, I want to talk about one of the earliest attempts to do so through litigation – a case buried under the tome of Indian environmental jurisprudence since produced.

In 2013, the NGO Environment Support Group, Bengaluru (ESG) helped agro-pastoral communities from villages in Challakere, Karnataka file a petition before the National Green Tribunal (NGT). They were challenging the diversion of close to ten thousand acres of grasslands used by local communities as grazing land in the region. Being set up was a “Science City” that would boast of defence, technological, and renewable energy establishments. Thus, alongside the Indian Space Research Organisation, the Defence Research and Development Organisation, the Bhabha Atomic Research Centre and others, one beneficiary of the Science City was Sagitaur Ventures Pvt. Ltd., to whom a thousand acres had been allotted for developing a solar energy project.

ESG argued that when it filed the petition, none of the project proponents had been granted environmental clearances and other regulatory permissions (such as under the Water and Air Acts). This, it said, would lead to high-risk, hazardous facilities being grouped together without any assessment of the risk or of the possible cumulative environmental and social impacts of the projects. This would pose a grave risk to Challakere, and the Amrit Mahal Kavals, the ecologically sensitive and biodiversity-rich grassland ecosystem of the region, named after an indigenous breed of cattle. This was also the last remaining contiguous stretch of grasslands in Karnataka.

Further, all this would be without any consultation whatsoever with the local communities impacted or even locally elected governments. ESG brought to the NGT’s notice that amongst those losing access to the grassland commons were residents of close to seventy villages. These included, for instance, the Kuruba and Golla shepherding communities, and the Lambani, Akki pikki and Nayaka tribes, who have traditionally depended on the Amrit Mahal Kavals—whether to graze cattle and sheep, or access food, medicine and other raw materials such as palm fronds used to weave baskets for sale.

All the project proponents, of course, protested, but of most relevance here is Sagitaur’s response. The corporation told the NGT that it had obtained a clarification from the Ministry of Environment, Forest and Climate Change (MOEFCC) that ‘solar power projects’ were not covered within the Environment Impact Assessment (EIA) Notification 2006 and therefore no environmental clearance was required under that notification for their project. It had, however applied to the Karnataka State Pollution Control Board for permissions under Indian water and air pollution control laws.

Ultimately, through its judgment passed on 27 August 2014 in Leo F. Saldanha v. Union of India and others, (the Challakere case), the NGT allowed all the projects to go ahead subject to obtaining the clearances required under the EIA Notification and under pollution control laws. It acknowledged the adverse social and environmental impacts of the proposed works and forbid any further diversion of the Amrit Mahal Kavals, but took the view that the “smaller” public interest would have to yield to the “larger” public interest and the projects already underway could not be scrapped.

About solar power in particular, it waxed eloquent about its many benefits including greenhouse gas emission reductions and energy security. But the NGT also passed an important direction. Circling back to the exemption to solar projects under the EIA Notification granted by the MOEFCC, it said:

“Citing an Office Memorandum issued by the MoEF, M/s. Sagitaur Ventures India Pvt. Limited, the 14th Respondent in Application no. 6 of 2013, claims that it need not obtain EC from the MoEF. We are of the considered view that the Solar thermal power technology is still at its infancy. Its impacts on environment are being investigated in many research institutes across the globe and newer and newer information on this aspect in emerging. In fact, the applicant placed before the tribunal a few of the recent literature on this aspect and took us through the significant findings in this regard. Keeping these and the averments made by the applicant on the subject in mind and also guided by the “Precautionary Principle”- one of the legs of the concept of “Sustainable Development”, we direct the MoEF to revisit the exemption order with regard to EC given to M/s. Sagitaur Ventures India Pvt. Limited and pass suitable orders in the light of recent research findings and other relevant materials available.”

Going by the NGT’s directions, Sagitaur was a thermal solar power park, which is different from solar photovoltaic (PV). The first concentrates heat from sunlight to either meet heating needs or converts it to electricity, while the second uses special panels that generate an electrical charge directly when exposed to sunlight.

In its directions to Sagitaur and the MOEFCC in the Challakere case, the NGT seemed to zero in only on solar thermal power as being a nascent technology whose impacts were still being evaluated, staying silent on solar PV. It would also seem that the NGT was only asking the MOEFCC to revisit its exemption order of 30 June 2011, i.e. the one concerning solar thermal power alone. Further, the directions were too vague to have any real meaning: the MOEF was asked to “revisit” the exemption and “pass suitable directions” in light of emerging evidence.

Perhaps the reason the NGT limited itself to solar thermal projects was because Sagitaur’s was one, and it would have been improper to adjudicate upon the regulatory regime for solar PV projects when that was not before the tribunal for its consideration. What complicates things is that information available about Sagitaur publicly suggests that it is in fact running a solar PV plant in Challakere!

It has been eight years since the NGT’s judgment in the Challakere case. The MOEFCC did “revisit” its exemption to solar thermal parks, in the OM issued on 7 July 2017. Unsurprisingly, the exemption given to solar PV and thermal projects was reiterated, and extended to large-scale “solar parks” as well (though the term is not defined in the OM). Eventually, through the draft EIA Notification 2020, the MOEFCC sought to formalise the exemption for solar PV and thermal projects and solar parks within the EIA notification itself.

The Challakere case is important to remember because it was the first time that any court or tribunal in India acknowledged the potential adverse effects of solar power in any form. Of course, the local communities who wished to protect the Amrit Mahal Kaval grasslands lost around ten thousand acres to the proposed Science City, but the NGT did direct that the remaining kavals could not be diverted, which was a landmark direction for the protection of fifty thousand acres of grasslands. Ultimately, the case is yet another reminder of how essential it is to make local communities an integral component of environmental decision-making—they are not only the first and most impacted, but also uniquely placed to anticipate, observe and report those impacts. This principle remains as true as ever for emerging technologies that are supposedly “clean”, the impacts of which are only beginning to be explored across the world.

Malvika Kaushik is an environmental lawyer and researcher. She was formerly associated with Environment Support Group, Bengaluru as its Assistant Coordinator (Legal).