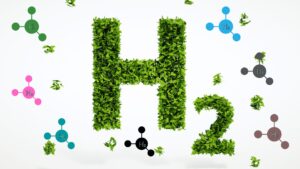 We have discussed, the narrative of hydrogen and its application in both transport and the industry, so naturally, the next step is the technical classification of hydrogen on the basis of its origin. To make it easier to identify the kind of hydrogen and its unique properties which depend on the way it was produced, hydrogen (an originally colourless gas) is assigned different shades such as blue, green, grey, brown, pink, etc.

Why do we need different shades of hydrogen?

Just like humans are assigned names at birth, hydrogen is assigned a colour at production. They help in efficient classification and communication. These nicknames, however, are not standardised across the industry, country, and even organisations. So, today in this article we will talk about the most commonly used colours for different types of hydrogen but as discussed there is no certain “nomenclature” by which they have been named.

Green hydrogen, in simple terms, is the hydrogen formed with zero carbon emissions. It is formed by electrolysis of water (splitting of water molecules into hydrogen and oxygen using electrochemical reaction) using renewable energy from sources such as wind, solar, etc. This is the cleanest way of producing hydrogen as it is directly formed by electrolysis and even the electricity used in the reaction is clean as it is made by renewable sources.

The advantages of green hydrogen are obvious: zero carbon emission. However, it comes with its own disadvantages. Firstly, due to the high cost of clean electricity, the process of electrolysis becomes exorbitantly expensive, which increases the cost of green hydrogen. This means that using green hydrogen becomes unprofitable in the industry. In fact, only 1 percent of hydrogen produced in the US annually is green.

This hydrogen production is identical to grey hydrogen production except for an extra step. The carbon dioxide formed due to the SMR technique is then captured using a method called Carbon Capture and Storage (CCS). This has fewer carbon emissions compared to grey hydrogen. However, it’s still damaging to the environment as it doesn’t eliminate the formation of greenhouse gases. Greenhouse gases are still produced but they are just captured and dealt with using technology. In fact, an increase of 20% is seen in GHG emissions from the burning of blue hydrogen when compared to natural gas.

Pink hydrogen also referred to as purple or red hydrogen, is formed by electrolysis using electricity from a nuclear power plant. This method of production can form hydrogen in large quantities cost-efficiently. Furthermore, the high-temperature heat formed in the nuclear reactors can be used to form steam, which can then be utilised in SMR to produce blue or grey hydrogen. This accounts for very high efficiency.

Read Part 1 of the series ‘History of Hydrogen as a Fuel’ here.

Read Part 2 of the series ‘Use of Hydrogen in Modern Transport’ here.

Read Part 3 of the series ‘Use of Hydrogen in the Industry’ here.

Snigdha Singh, a 12th grade student from Mumbai, is an intern here at CFA and is passionate about economics and finance.