In Part 2 of this series, we dive into the industry landscape, trends in our consumption, and some unanswered questions about India’s plastics. Read Part 1 here.

To fight plastic pollution, it is essential that we face the big, uncomfortable questions about the plastics industrial complex that keeps the demand for plastics alive in India. Here are the features of the plastic industry in India that are significant in the fight against environmental pollution.

The plastics industry is an economical behemoth

The Indian plastics industry employs nearly 40 lakh (4 million) people and the numbers are set to grow. It’s not just our own plastic consumption that sustains the industry but international demand for affordable plastic materials from India.

India is the world’s only producer of PBI and the second-largest exporter of FIBS!

PBI (polybensemidazole) and FIBC (flexible intermediate bulk container) are thermoplastics that can withstand extreme heats. They are used in many industries but especially in the packaging and transportation industries.

Profits from exporting plastic polymers and products bolster the influence of the plastics industry on our environmental policies. Last year, plastic polymers worth US$3.26 billion were exported from India.

In fact, the plastics industry has shown consistent growth of 3.4% a year and is predicted to maintain an annual growth rate of 3.4% until 2028. Plastics are also predicted to dominate 8–10% of the Indian market. By 2025, the Indian Chemicals and Petrochemical Industry, of which plastics is a part, is expected to harbour investments worth Rs. 8,00,000 crores.

Unfortunately, the production of plastics is expanding to meet the ever growing demands. Perhaps this is why plastics are considered the “new coal”.

How does India consume plastics?

Data on our plastic use is scarce. If plastics industry reports are to be believed, each of us consumed 13.6 kg of plastic in 2018. While we must unequivocally aim to reduce this number, our individual consumption remains less than the global average of 30 kg per person. The US leads with a consumption of 108 kg of plastic per person followed by China with 56 kg plastics consumed per capita.

Despite the relatively low per capita use of plastics, the total amount of plastics produced and consumed remains high because of other industries.

Interestingly, there appear to be geographic variations in how plastics are consumed in India. The business strategy wing of the Tata group found that, in 2013, western India alone accounted for 50% of plastics consumed by India. To fully understand how we consume plastics and manage our future consumption, rigorous and thorough scientific research is necessary.

How much do we actually recycle?

In short, the answer depends on who you ask and what they want the term “recycling” to mean.

If the 2016 Central Pollution Control Board (CPCB) report is referred to, India is estimated to produce 5.6 million metric tons of plastic waste annually and recycle 60% of the plastic waste.

However, the plastics industry disagrees. According to PlastIndia, a representative body of the Indian plastics industry, the amount of plastic waste that is recycled by 100 organised facilities and 10,000 disorganised units is closer to 70%.

The Centre for Science and Environment, a not-for-profit research and advocacy organisation, has found that PlastIndia’s sources for its recycling estimates are unclear.

Recycling has a specific meaning but is wrongly used to mean conversion of plastic materials from one usable form to another. Turning a discarded plastic chair into shoe straps is an example of downcycling, not recycling.

When a plastic object is recycled, the end result is of the same quality and economical value as the original object.

Most of the processes used in melting down or breaking down plastic waste result in loss of quality, either as ashes, fumes, or chemical byproducts. The resulting material is always less than the original in mass and quality.

Upcycling refers to the conversion of one plastic object into another plastic object of better quality and greater value. An upcycled product generally has a longer life than the original.

The terms upcycling, downcycling and recycling are not interchangeable.

But that’s not all. The estimates from CPCB are greatly exaggerated as well. This is because of how the government views recycling.

The government continues to classify the burning of plastic by industries as recycling. Burning plastics releases highly concentrated toxic fumes and ash that cause more harm in a shorter period of time than discarded bottles and plastic waste. Whether the burning is done to melt down plastic products to make new ones or to build an illusion of environmental responsibility, the environmental damage done is permanent.

Just like the government, the plastics industry exploits the lack of clarity on what constitutes recycling to inflate their reports of successful recycling programs.

With multiple sources providing different assessments, the current recycling regimes evade assessment and realistic policymaking. Here becomes relevant the Material Recycling Association of India (MRAI). The MRAI brings together over 20,000 small, medium and large enterprises, as well as regional, national, and international trade associations to promote responsible recycling across all Indian industries. And the MRAI found in 2018 that only 30% of plastic waste is recycled in India.

The inconsistency in recycling estimates represents a deep and concerning lack of transparency and accountability surrounding India’s plastics.

The story of India’s plastics is evolving. In understanding where we stand today with our plastic production and use, we are empowered to make a difference for the future. Read more about our work here.

This article was edited and simplified by Upasana. The detailed article can be read here. 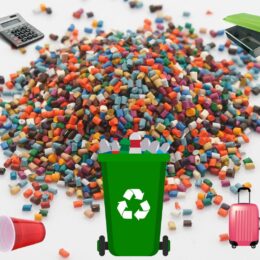 The Story of India’s Plastics – Part 1