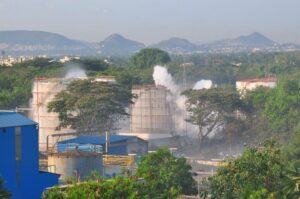 Big money is set to fuel the making of more plastics in India. But how and where is plastic made? The production of phenolics in India began in 1947 and the first thermoplastics (polystyrene) were made in 1957 (PlastIndia, 2019). In 2018-19, the production of plastics in India was 170 lakh tons (PlastIndia, 2019).  According to the same report, the industry size was INR 5.1 lakh crore with around 4000 converting units in 2018-19. Over the years, plastic production has substantially increased. All these factors make it imperative to understand the complex structure and organisation of the plastics industry in India to assess the current status, and understand future projections and financing. This article outlines the process of plastics production and processing, and provides an insight into the structure of the Indian plastics industry.

How are plastics made?

Plastics are made from materials including crude oil, natural gas, coal, cellulose and salt. The raw materials are first extracted from the earth (mostly outside India). The crude oil is distilled in refineries (such as the ones belonging to Reliance Industries in Gujarat). This process separates out the lighter components such as naphtha. Next, the lighter olefin gases are converted into a variety of polymers or plastics, which are made in the form of small pellets. These plastic pellets are packed and sent to the numerous factories in the plastics processing sector where they are melted, moulded and remoulded into a variety of plastic objects for end use. The insight on how plastics are made provides a backdrop for understanding where plastics are made. Most plastic manufacturing units are located near petrochemical installations, since it offers easier access to raw materials. The image below maps the location of key plastic manufacturing units in India. 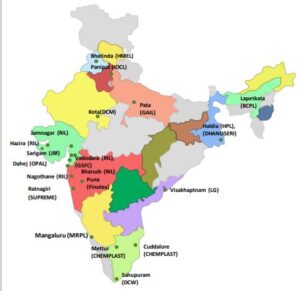 Structure of the plastics industry

The Indian plastics industry employs about 40 lakh workers and comprises around 30,000 processing units and 2,000 exporters. According to the Indian Brand Equity Foundation (IBEF) of the union government, around 85-90% of the processing units are small and medium-sized enterprises (May 2021). In Indian policy documents, the ‘plastic industry enterprise refers to industrial units engaged in manufacturing of plastic products/items/articles by using plastic as raw materials’. Plastic material means organic polymers of high molecular mass from petrochemicals such as Polyolefin (LLDPE, LDPE, HDPE, PP), PVC, Nylon, Polyesters, Polystyrene, Polycarbonate, polyamide (nylon 6, nylon 66) etc.’(1) Plastics and petrochemicals come under the union government’s Ministry of Chemicals and Fertilisers’s Department of Chemicals and Petrochemicals (DCPC). Government records and policy documents consistently highlight the presence of numerous MSMEs and the fragmented nature of the large plastics industry that is in dire need of technology upgradation. The government’s stance seems to be to benefit from economies of scale through cluster development in order to boost production and add to exports, thereby contributing to the Indian economy and to employment generation.

The image of a large and fragmented industry populated by numerous MSMEs that is highlighted in official documents of the union government, seems to be at a variance from the picture that emerges from PlastIndia Foundation’s illustration of a few of the major manufacturers in the plastic industry and their enormous contribution to the total plastics production in India that is depicted in charts below.  Another example supporting the oligarchy idea comes from the 2011 estimates of British Plastics Federation, which shows that between 75-80% of Polypropylene demand in India was met exclusively by Reliance Industries and around 20% came from four Government run companies—Indian Oil Corporation Ltd (IOCL), Haldia Petrochemicals, Bharat Petroleum Corporation Ltd (BPCL) and Gas Authority of India Ltd (GAIL). In 2011 domestic production met only about 50% of the construction industry’s large and growing demand for PVC and here too the major contributors were Reliance followed by Chemplast and Finoflex (the latter two accounting for only 5% of the demand) (BPF, 2011).

This discrepancy is explained by the structure of the Indian Plastics Industry—15 polymer manufacturers and 200 equipment manufacturers dominate production, while the plastics processing sector comprises of 30,000 units and plastic recycling is undertaken by 4,000 unorganised and 3,000 organised units (FICCI and TSMG, 2017, page 10). (2)

Other actors that contribute to the making of plastics in India, who support the plastic production, manufacture and processing units, and collaborate with governments to direct policymaking are numerous local and regional plastic manufacturers associations. Alongside these are the various regional trade and industry associations that liaison with governments, and influence policymaking across sectors such as the Federation of Indian Chambers of Commerce and Industry (FICCI), Associated Chambers of Commerce and Industry of India (ASSOCHAM) and the Confederation of Indian Industry (CII).(3) The Central Institute of Petrochemicals Engineering and Technology (CIPET)—an autonomous institution under the GOI’s DCPC, formerly known as the Central Institute for Plastics Engineering and Technology, largely caters to the manpower needs of plastics and allied industries. The CIPET offers specialised and practical training programs in Plastics Processing/ Injection Moulding/Extrusion/ Tool Room and Design (‘long term training’ and ‘vocational courses’) and technical and consultancy services.

Growth rate and plastics: the size of an industry

The compounded annual growth rate of the global plastic industry between 2010 – 2019 was 3.5% and is expected to grow at a CAGR of 3.4% between 2021 – 2028. Estimates put India’s plastic industry at a CAGR of 10% in volume in 2015 where production in 2010 was 8.3 MMTPA and 13.4 MMTPA in 2015.  India exported approximately USD 3.26 billion worth of plastic raw material in the financial year 2021 (IBEF, GOI). Estimates pitch the market size of the plastics industry in 2025 to grow at a CAGR of 8 – 10% until 2025. The Indian Chemicals and Petrochemicals industry, of which plastics is a part, is expected to harbour investments worth Rs. 8,00,000 crore by 2025 (FICCI press release May 2021). The Plastindia Foundation—body of associations, organisations and institutions connected with plastics, emphasises the correlation between GDP and polymer consumption. Image 1 illustrates the fairly high correlation between GDP and polymer consumption from 1990 till 2022. 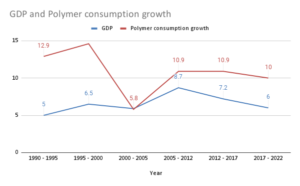 The growth rate of the Indian plastics industry in 2011 was one of the highest in the world, with plastics consumption growing at 16% per annum (compared to 10% in China and 2.5% in the UK) (British Plastics Federation, 2011). Plastics have been called the new coal (Beyond Plastics October 2021) and the industry is unfortunately set to expand.

According to Tata Strategic Analysis, India in 2018-19 was the largest manufacturer of lami tubes and BOPP (Biaxially oriented polypropylene) tubes, and had the largest Rotomolded tank market in the world. India is the only producer of PBI (Polybensemidazole) in the world and is the second-largest exporter of FIBC (flexible intermediate bulk container) bags and the fifth-largest producer of PP (Polypropylene). These plastics are used in various industries, especially for packaging and transportation.(4)

Commodity plastics are the most used in items of everyday use and importantly in single use plastics (SUP). We shall therefore focus on this type of plastics in this paper as they have the most detrimental impacts on the environment and people. The following table shows the end use of each of the commodity plastics. 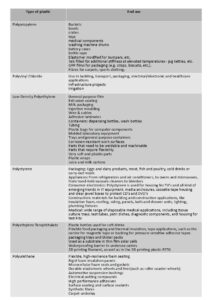 The graph below shows the key manufacturers of commodity plastics. According to the PlastIndia (2019) report, Reliance Industries Limited is the sole producer of LDPE and owns 42% of the total production capacity of commodity plastics with OPaL standing at a distant second place. 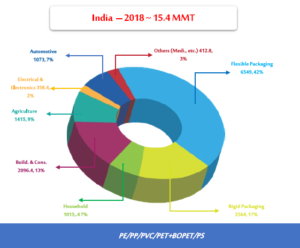 From the above graph it appears that flexible and rigid packaging is the biggest consumer of various kinds of plastics forming 59% of total usage, with building and construction coming a distant second at 13%, followed by agriculture. Household and automotive come fourth with 7% each.

Furthermore there are regional variations in the consumption of plastics across India. Research by Tata Strategic utilises IOCl industry reports to show that western India utilised almost half of the total plastics consumed in India in 2013.

Various estimates claim that approximately 60% of plastic waste is ‘recycled’. In 2016 while introducing the new Plastic Waste Management Rules the union government estimated that India recycles 60% of 5.6 million metric tons of plastic that are annually discarded (Doron, 2018, Page 289)(5). Alternatively, PlastIndia estimates that 70% plastic was recycled by 100 organised and 10,000 unorganised units in 2019. According to the Center for Science and Environment, the source of the aforementioned data (Plastivision) that is repeatedly quoted by the plastics industry is unclear. Furthermore, the data source and sample that the Central Pollution Control Board of the union government draws upon to estimate the extent of plastic waste generated is also contested by civil society. The CPCB draws upon estimates of population to estimate plastics consumption and waste. In 2018-19, 3,360,043 tons of plastic waste was generated in India (Central Pollution Control Board Annual Report 2018-19 on Implementation of Plastic waste Management Rules, 2016, CSE). The recycling figures are exaggerated also because the Government of India continues to classify the burning of plastic in cement kilns, incinerators and waste to energy plants under recycling and hence the amount of plastic that is actually recycled is likely to be much lower. According to the Material Recycling Association, recycling rate in India stood at 30% in 2018. 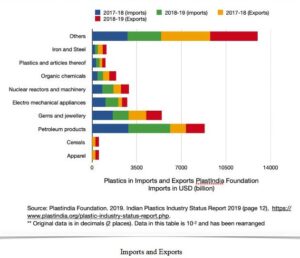 The plastics industry has consistently expanded in India increasing the amount and type of plastic produced. The nature of the plastics industry provides a backdrop for understanding the policy framework that directs the future of plastics in India which is geared towards enhancing the export of plastics. The contemporary structure of the political economy is configured to enhance plastic production, linking the use of plastics with necessity, development and convenience in popular culture, even as environmentalists capture the extent of inundation of plastics and its worrying impacts on climate, environment and health throughout its lifecycle. In this light, it is necessary to bring the discussion on the harms of plastic waste and pollution in conversation with the discussion on growth targets of the plastics industry and to harmoniously work out a sustainable way forward.

4. BOPP films are used in food packaging and are replacing cellophane in snack packaging. Lamitubes or laminated squeeze tubes are a form of tube material that have barrier properties close to those of metal. Rotomolded tanks are used to store water, construction materials and chemicals. They are useful for  irrigation, rain water collection etc. PBI is very stable and is used to fabricate high-performance protective apparel such as firefighter’s gear, welder’s apparel, astronaut space suits, high temperature protective gloves. FIBC bags are super sacks or jumbo bulk bags made of flexible fabric for storage and transportation of dry flowable products like sand, fertilizer, granules of plastic. PP is used for packaging and consumer products in many industries such as the automotive industry. Plastic packaging, plastic parts such as hinges for machinery, fibres and textiles are among the many uses of PP. 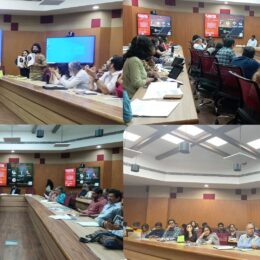