It is absurd for the ministry to say 5.5% inflation in FY22 didn’t hurt the poor and even more so its claim that a fall in inflation from 6.2% in FY21 to 5.5% in FY22 led to “redistribution of the income” 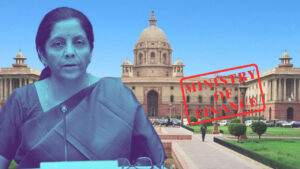 To most, the Finance Ministry’s Monthly Economic Report (MER) of April 2022 came as a rude shock. It said: “Evidence on consumption patterns further suggests that inflation in India has a lesser impact on low-income strata than on high-income groups.”

The Finance Ministry is not a propaganda arm of the political party running the government. When it does that there are sound reasons to feel let down, especially since India is passing through multiple crises – rising poverty, hunger, unemployment and inflation.

The day the Finance Ministry did so, the Ministry of Statistics and Programme Implementation (MoSPI) released the inflation data for April 2022 showing the headline CPI inflation had touched an eight-year high of 7.8% and the food inflation even higher at 8.4%. The inflation is expected to remain high because of both pre and post-Russia-Ukraine war reasons.

The Finance Ministry would have certainly known the above numbers as both reports were released an hour apart on May 14 2022. The claims are obviously aimed at giving a “positive” spin to the bad news awaiting from the MoSPI. It also reinforces Finance Minister Nirmala Sitharaman’s richly deserved epithet “spin doctor for Modi’s broken economy” that journalist Somesh Jha qualified her within his profile of her in Caravan magazine last month, “Divergent Accounts”.

The Finance Ministry’s claims are based on a study it carried out too.

The basic premise of the study is (as it said), “CPI inflation affects consumers and households in a manner consistent with their expenditure patterns and shares”.

It then analysed the household expenditure patterns. The basis of this analysis is the 2011-12 NSSO data on monthly per capita consumption expenditure (MPCE) of households – a decade-old survey data.

Why doesn’t the ministry base its study on more recent data? Because it doesn’t have one. Sitharaman’s government had junked the 2017-18 NSSO’s MPCE survey for showing that poverty had grown between 2011-12 and 2017-18 with ‘real’ consumption expenditure of households falling. The government raised questions about its data quality although the NSSO is part of the same government. Nor did it attempt to carry out a fresh survey to find the state of household consumption expenditure.

Nevertheless, here is how it did the study.

Based on the 2011-12 data, it divided households into three categories: top 20%, middle 60% and bottom 20%. Their consumption expenditure patterns were classified into three categories: food and beverages, fuel and light (including transportation), and refined core items (excluding food and fuel). These are the heads under which inflation rates are available.

This way, it arrives at the expenditure share of households.

The ministry then maps the expenditure shares (food and beverages, fuel and light and refined core) and thus arrived at their corresponding inflation numbers for FY21 and FY22 for the three categories of households in urban and rural areas.

Its findings are (predictably so):

The study, its findings and the conclusions betray a complete lack of basic knowledge of economics. Here is why.

Firstly, there is no need for such a study.

If inflation comes down from a higher level to a lower level, the adverse impact would also come down. For this to know simple common sense is enough, no study is required.

Second, a fall in inflation in one year doesn’t mean that inflation doesn’t hurt the poor. At 5.5% of the headline inflation in FY22 it is very high – significantly higher than the RBI’s mandate to maintain inflation at 4% and very close to the RBI’s upper tolerance limit of 6%.

Third, just because food inflation was lower in FY22, compared to fuel and refine core, it doesn’t mean the rich suffered more than the poor. The Finance Ministry must be aware that while most part of poor households’ income goes into food, the total consumption expenditure of the rich is a tiny or negligible part of their total income. Most of the rich households’ income goes into savings and much of their expenditure is on luxury goods. The poor have little savings and a little luxury.

The right metrics is then to compare the inflation with the income levels of different categories of households to know how it affects them and to what extent.

Fourth, redistribution of income means a reduction in income inequality – income of the bottom 20% rising to reduce the gap between that of the top 20% and the middle 60%.

Multiple studies have shown not just income inequality but also wealth inequality is not only going up in India but these have risen far more sharply in India than in any other country in the world. Economist Thomas Piketty’s multiple studies, particularly the one with fellow economist Lucas Chancel, “Indian Income Inequality, 1922‐2015: From British Raj to Billionaire Raj?” of 2019, have established that. They have shown that income inequality had gone down during the Nehru era but went up very sharply after the 1991 economic liberalisation when neoliberal economics was adopted at the instance of the World Bank and IMF – to which India had turned for a bailout then.

Did the Finance Ministry – which neither maps income and wealth inequalities nor has any data on consumption expenditures (other than the NSSO’s 2011-12 survey) or on growing unemployment, poverty and hunger – find any evidence of a reduction in income gaps in FY22 to claim “favourable redistribution of the income from top to bottom and middle-income groups”?

If it did so, it didn’t disclose it.

Fifth, at best, lower inflation spares the pain on the poor but 5.5% headline inflation is not low by any standard – as explained earlier.

Besides, the Finance Ministry ignores the other inflation number, WPI. The WPI inflation for FY22 was very high at 12.9%. In March 2022, it reached a new high of 14.6%. High WPI inflation shows up in CPI inflation too, though with a time lag and hence, is an important factor.

The Finance Ministry must also be aware that the RBI, in an unprecedented move, broke its bi-monthly monetary policy cycle to raise the repo rate by 40 basic points and cash reserve ratio (CRR) by 50 basic points to tame the runaway inflation on May 5, 2022. RBI Governor Shaktikanta Das specifically said then: “Sustained high inflation inevitably hurts savings, investment, competitiveness and output growth. It has pronounced adverse effects on the poorer segments of the population by eroding their purchasing power.”

The RBI is expected to raise the repo and CRR further at least throughout the rest of the fiscal.

That food inflation will also remain high is evident from the overnight announcement of the ban on wheat export on May 14, 2022 – one day after the government declared to send trade delegates to nine countries to boost wheat exports. One month earlier, on April 12, 2022, Prime Minister Modi told the US President that he would feed the world.

The Finance Ministry has, evidently, made its remit to do the propaganda for the ruling BJP under Modi – which is known for its ineptitude and incompetence.

The Finance Ministry knows well that under Modi, the BJP-led government has committed a series of policy blunders inflicting immensely avoidable immense pain on the people and the economy. From the disastrous demonetization to botched GST to untimely and unplanned lockdown and unlocking to organizing super-spreader events like the Haridwar Khumbh and prolonged elections in West Bengal and other states during the devastating second wave of the pandemic, the Modi government has destroyed millions of lives and livelihoods. Such is the severe job crisis that a large number of people have dropped off the labour market and the labour force participation rate (LFPR) and worker population rate (WPR) both have nosedived. India’s ranking on Global Hunger Index has fallen to 101 of 166 countries in 2021, from 94 in 2020.

Had the masses not been reduced to penury, the Modi government wouldn’t have declared to give a “free” ration of 5 kg wheat/rice to 62.5% of India’s total population till September 2022 over and above the “subsidized” ration to the same 62.5% of the population under the National Food Security Act (NSA) of 2013. Would it?

Instead of learning these basic facts and also the basic economics, the Finance Ministry under Nirmala Sitharaman has turned into propaganda machinery, spreading fakery, rather than doing something worthwhile.