Every single institution built up during the last 75 years is either being weakened, strangulated or killed at a slow pace.
We are seeing a weakened Election Commission, strangulated Judiciary as stated by the Chief Justice of India. Development Financial Institutions have been killed over a period of time and attempts to kill the public sector, Life Insurance Corporation of India and Public Sector Banks have started. Many Public Sector Undertakings have been put on sale, and several efforts are covertly on to kill the National Bank for Agriculture and Rural Development (NABARD).​

After Independence, there were many sincere efforts to address issues plaguing the country like backwardness, inequality, access to credit, development of infrastructure, setting up core industries, and mobilising savings.

To combat these, the Reserve Bank of India (RBI) at the instance of the Govt of India constituted a Committee to Review the Arrangements for Institutional Credit for Agriculture and Rural Development (CRAFICARD). The committee’s interim report was submitted on 2nd November 1979 and at its recommendations, NABARD was formed by the Parliament through Act 61 of 1981.

NABARD came into existence on 12th July 1982 by transferring the agriculture credit functions of the RBI and refinance functions of the then Agriculture Finance Development Corporation (ARDC). It was dedicated to the nation by Mrs Indira Gandhi, then Prime Minister, on 5th Nov 1982.
It ​started with an initial capital of Rs.100 crore, but as of 31st March 2020 its paid-up capital stood at Rs.14080 crores, and it is fully owned by Govt of India.
The mission of NABARD is to promote sustainable and equitable agriculture and rural development through participative financial and non-financial interventions, innovations, technology and institutional development for securing prosperity.
​NABARD has done a commendable role during this period of 40 years.  At present, NABARD is a channel partner of GOI in the following schemes.
➢ New Agriculture Marketing Infrastructure sub-scheme of ISAM
➢ Agri Clinics and Agri-Business Centres scheme
➢ National Livestock Mission – Entrepreneurship Development & Employment Generation (NLM – EDEG)
➢ Dairy Entrepreneurship Development Scheme (DEDS)
➢ Commercial Production Units of Organic inputs – National Project on Organic Farming (NPOF)
➢ GSS – Ensuring end-use of subsidy released
➢ Interest Subvention Scheme.
➢ Rural Infrastructure Development Fund Scheme.

NABARD promoted Self Help Groups, which is a better model than its pioneer, Bangladesh Grameen Bank.  NABARD promoted Kisan Credit Card Scheme which has benefited billions of farmers. NABARD has also financed Food Parks. The performance of NABARD can be seen at a glance from the charts from its Annual Report 2020-21. 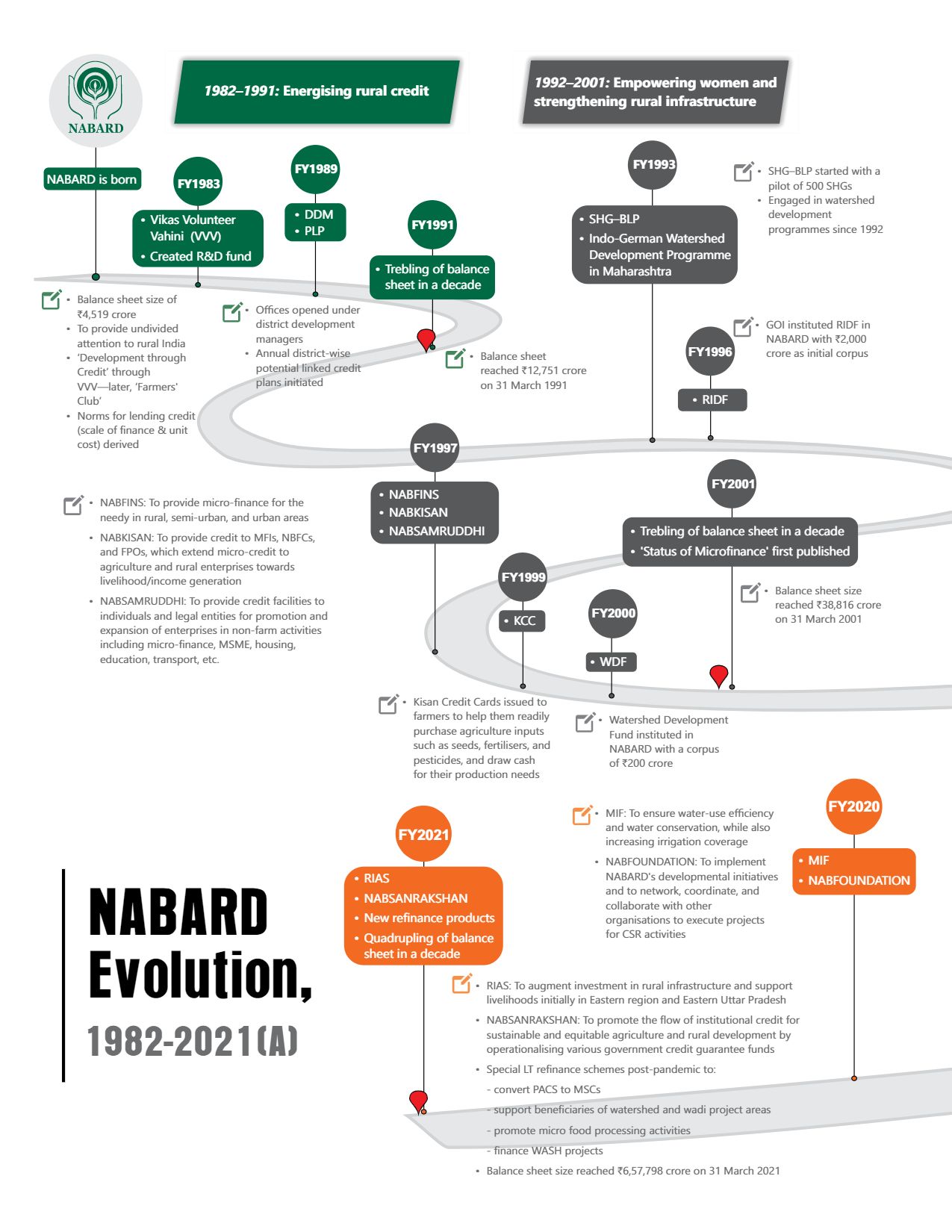 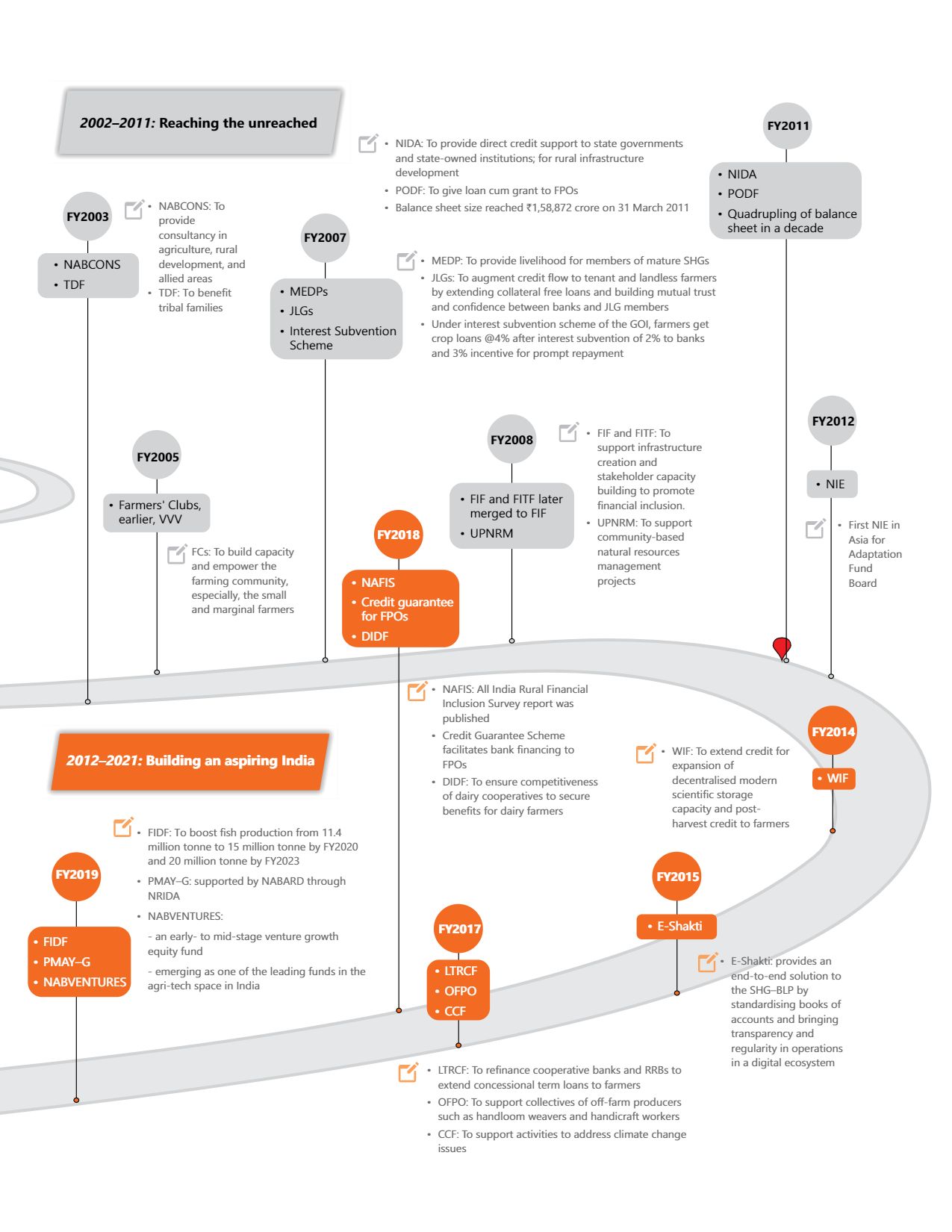 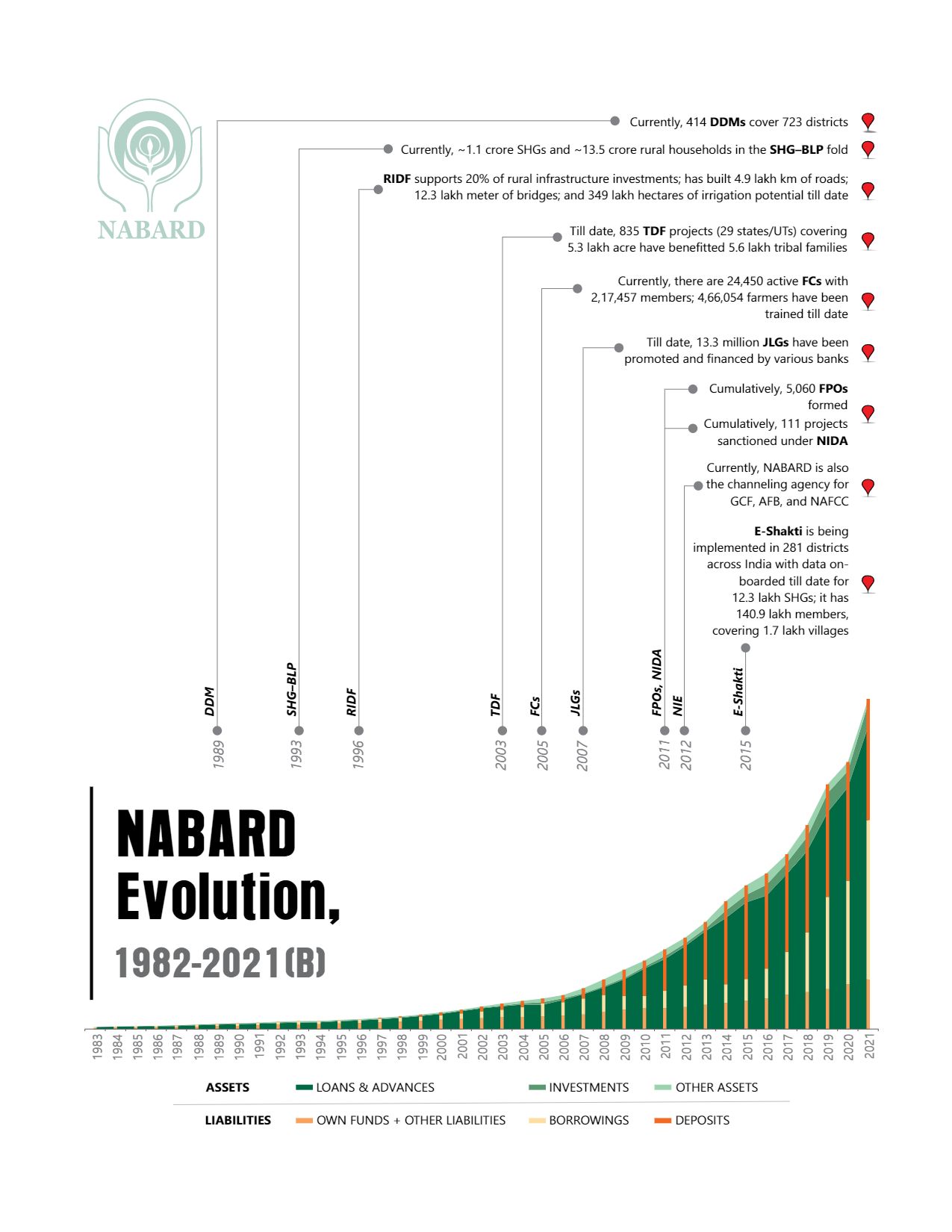 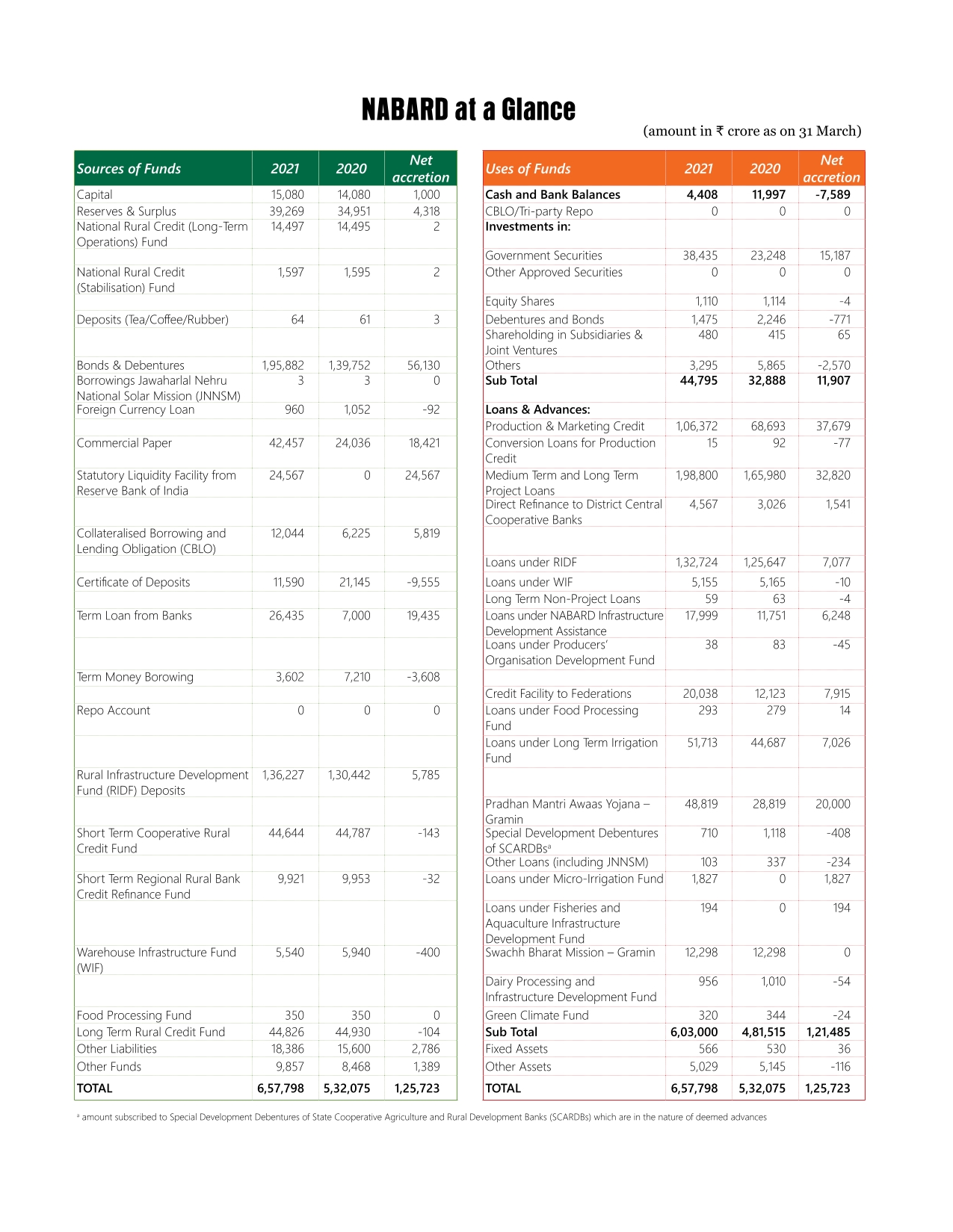 ​Despite all these, the following five major changes made in NABARD’s functioning are designed as attempts to kill NABARD so that the farmers are directly affected.  Is it a punishment for the farmers’ agitation?.

1. The staff strength of NABARD which was 4065 in 2016 has come down to 3373 when the activities have increased, the business has steadily grown and NABARD requires more than double the staff strength.

2. The District Development Managers (DDMs) are like one man Army in districts. Out of 723 districts in the country, only 414 have DDMs, and now they are being removed from districts to clusters. There will be a cluster office for 3-4 districts, and DDM offices are being closed.  This has already been implemented in Punjab, Haryana and Telangana while in Tamil Nadu it is under implementation.  This is going to be a huge disaster.

DDMs prepare Potential Linked Credit Plans for every district, and see that it is implemented in close coordination with the lead bank of the District and the District Administration. They implement various Govt schemes, provide subsidies, monitor NGOs and SHG Federations, inspect Co-operative banks,  conduct studies, monitor and implement Rural Infrastructure Development Fund Scheme (RIDF), provide small projects to nurture SHGs, Micro enterprises, Common Facility Centres, assist Farmer Producer Organisations (FPOs), and attend various review meetings at the District Level. They are the link between the State level Regional offices and the development of the District. They are indeed like a one-man army. In fact, they should be provided with support staff, but they are being moved to a cluster.

In SBI there was an attempt to remove modules at the recommendations of McKinsey. Which turned out to be a monumental failure, and was restored again. In Tamil Nadu, the Chief Minister has announced district-based development and there is a resource-based development model emerging in which NABARD has a major role where their Potential linked Credit Plans for 5 years converted into Annual Plans are crucial. The DDM’s role here is crucial. Tamil Nadu government needs to immediately oppose this proposal.

The reduced strength of the staff, outsourcing, and the abolition of district offices will be a disaster. It will make it difficult to monitor the schemes listed in ‘NABARD evolution’ for both the government and NABARD.

For the people in the districts and for the NGOs, Govt Officials, Horticulture & Agriculture Departments, SHG federations, and Co-operative Banks the cluster offices will be so far away that they will find it difficult to approach them.
This needs to be stopped immediately.

3. NABARD is forced to provide loans to unscrupulous people, like Anil Ambani for their dubious business activities. These loans are becoming non-performing assets. NABARD should stop lending to Non-Banking Financial Companies.

4. Instead of NABARD, organisations like the lead NGOs and Nodal Agencies are entering the field as consultants and promoters of Farmer Producer Organisations. These are basically middlemen. Many of these have political connections and are easily corruptible. NABARD has the distinction of being the least corrupt organisation which will be gone soon with these changes.

5. Many projects and schemes of NABARD are being wound up to weaken NABARD and its existing programmes. This will lead to the failure of NABARD. Then you can kill it, calling it a failure, just like calling the dog mad before shooting it. With this, the only existing Development Finance Institution will die. PM and FM will promote a new one, which will be run by the private corporates close to them.

Let’s wake up and fight before it is too late. With these changes in NABARD, everyone ranging from the farmers, SHGs, and Joint Liability groups to the Co-operatives are going to be affected. This will directly impact rural development. It is time all of them unite and raise their voices.