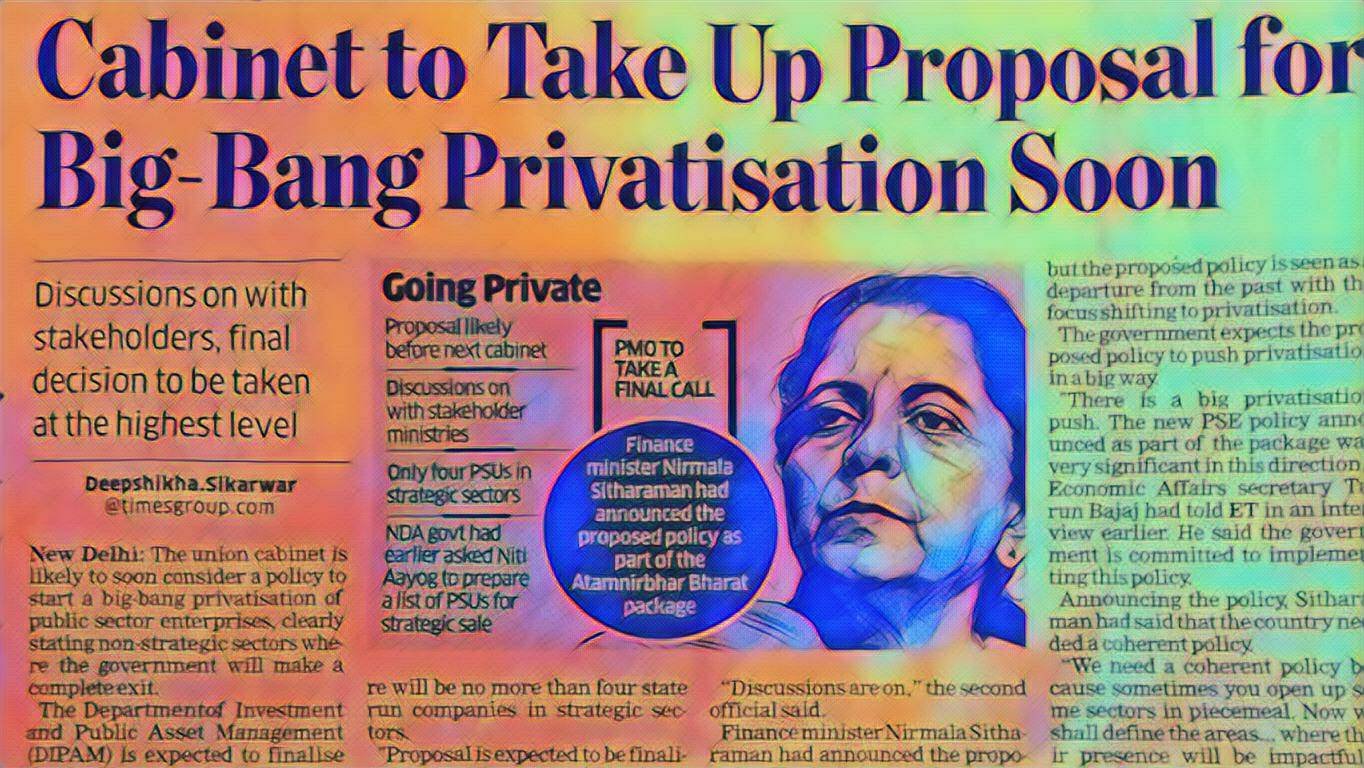 ​Tuhin Kanta Pandey, Secretary, Dept of Investment and Public Asset Management was addressing industrialists in the meeting ‘CII National Conclave’ and stated that disinvestment is back on track now. He is supposed to invest and not disinvest. His speech is in fact venomous and with the pitch of ‘Sell India.’

​He said that the Govt is eying a sale of its residual stakes in erstwhile Public Sector firms like Paradeep Phosphates, Hindustan Zinc and Balco, where Govt still has 29% to 49% stake and the companies are profitable yielding good dividend to the Govt. They were invested during Vajpayee’s time. The sale was put on hold by the Supreme Court in 2016 in the case of Hindustan Zinc.

​Pandey has stated, “There is a very big privatisation agenda. Apart from NCLT there will be a lot of assets on offer from the Public Sector.” The cat is out of the bag. NCLT was brought to help Private Sector to buy huge assets at throw away prices. That’s why haircuts are taking place helping Ambani, Agarwal and the others. Bhushan Steel was given to Tata Steel. Essar Steel to Arcelor Mittal. Anil Ambani’s Reliance Telecom to Mukesh Ambani. Alok Industries to Mukesh Ambani. The sale goes on.

He also stated the LIC will be the biggest IPO, and it will be completed by this fiscal year. Govt just invested Rs 5 crores in LIC, and it provides funds for one third of the budget of the country. It is the only company in the world which shares 95% of its profit with policyholders as bonus.

​Power Grid Corporation is being disinvested too. More airports are going to be privatised through Public Private Partnership. Already, Adani controls 12 airports. The assets of Gas Authority of India are going to be sold by asset monetisation.

​Is the Govt in such a bad financial state that it is selling profit making enterprises and landing on a distress sale mode? Are they already bankrupt? Pandey has to tell the people of the country.

​Karan Adani has told that CONCOR will be acquired through strategic sale like a breeze.

​In the case of Power Grid Corporation in 2013-14, the Union Govt’s share was 69.4% and Foreign Institutional Investors had 14.66%. Now in 2020-21, the Union Govt holds only 51.34% and the foreign investors hold 28.28%. Yet, the Govt wants to disinvest more. It is not only selling to the Indian corporates but also to foreigners, while, still talking about self-reliance. What a shame!

​In the case of BALCO which was a public sector company, the majority shareholding is with Vedanta – Anil Agarwal of Sterlite.

​Similarly, in the case of Hindustan Zinc, Vedanta has 64.9% holding, and it is not a public sector company any more.

​BPCL is owned by Central Govt with only 52.98% current shareholding. Foreign investors hold 12.63%. It’s likely that BPCL will be taken over by foreigners.

​In 1976 this company was nationalised under the act on the nationalisation of foreign oil companies. Now it’s going to foreign hands again. In 2003 the attempt was stopped by the centre for Public Interest Litigation as the Parliament did not approve and the BJP did not have majority in both the houses. But in 2016 the Parliament enacted the Repealing and Amending Act 2016 which repealed nationalisation of the company.  Now it’s going to be sold to foreigners! Self Reliance -Atma Nirbhar Bharat!

​Air India was founded on 15th October 1932, and commenced operations on 29th July 1946. Now, after 75 years, it is going to be privatised again. It was Tata Airlines initially. In 1948 the Govt of India acquired 49% holding. In 1953 Govt passed the Air Corporation Act and purchased the entire airlines from the Tata’s as it was essential to have a Public Sector Airlines.

​It is due to mismanagement, that it went into loss. And now it is going to be privatised. Will it go the Kingfisher and Jet Airways way?

​Nilachal Ispat Nigam Ltd was promoted by Minerals and Metal Corporation of GOI. It is the largest exporter of saleable pig iron. It is partly owned by the Odisha Govt. JSW Steel is likely to take over.

BEML serves worldwide. It specialises in Earth Moving Equipments. Underground Mining Equipment, Railway Equipment, High Power Diesel Engines, Heavy Duty Hydraulic aggregates, and it is a Defence Public Sector Unit. It has an excellent track record. Who is going to take it over? It is not clear yet. Tata, Mahindra and Ashok Leyland are in the race.

​So, it is not only a sale of PSUs but a ‘Wholesale’ offered to the Indian & Foreign Corporates which Pandey, Nirmala Sitharaman and Modiji are offering in the name of Self Reliance.

These corporates fund the RSS and BJP. They own the Govt. Even the mighty TATAs had to visit the RSS headquarters. People of the country Arise, Awake and Act. The silence of the majority is allowing Our Nation to be sold to the neo rich, both Indian and foreign. It’s time to Reclaim the Republic!