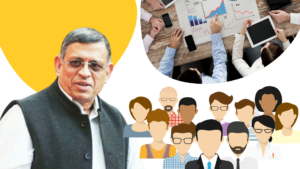 S. Gurumurthy, a government nominee on the Board of RBI, made this comment in a recent speech, “Efficient officials in Public Sector Banks are leaving because of low salary and lack of freedom, and we are left with scums or filth (Kalisadaigal in Tamil).” This was said in the presence of the Union Finance Minister and created a furore, anger and frustration among bank officials. The Unions and Associations in the Banking Industry have demanded an apology and the removal of S. Gurumurthy from the Board of RBI. Some Members of Parliament, Su. Venkatesan, Dr.Ravikumar, Dr.Tamilachi Thangapandiyan, Dr.Thol.Thirumavalavan, Subbarayan and others have demanded action against him from the Finance Minister.

Various Newspapers and Television Channels have published articles and interviews condemning the speech and have demanded an apology. Journalists Aravindakshan and S.V Venugopalan have strongly condemned the speech and demanded an apology. A letter was addressed to the Finance Minister by Shri. C.H. Venkatachalam (CHV), General Secretary AIBEA and released to the media.

In his defence, Mr S. Gurumurthy has circulated his reply saying, “Many capable officers have left the PSBs, leaving many filtered ones who could not go in the PSBs. This means many, who could not pass through the filter, remained inside. It is a fact and I stand by it. What I said that day in front of the FM should have made the PSBs introspect. It was not about all officers and certainly not about all the bank staff.”

“Today, no one can deny that many PSB officials lack the will, capacity and knowledge in a complicated financial world to make credit decisions. They are also afraid because of the enforcement and legal system. If the PSBs are terrified of positive criticism from one of the ardent supporters and if they don’t introspect, their decline cannot be arrested.”

He also had stated in the mail that if CHV had guts, he should circulate the mail of Mr S. Gurumurthy. CHV has circulated it, along with his reply to the mail, and given interviews to the media, reiterating his stand. Mr Kripakaran, the State convener of the United Forum of Bank Unions, has also issued a statement and given an interview. UFBU, TN has announced a demonstration on 25th May. AIBOC, State Unit, has also given a statement. AIBOA General Secretary Mr S. Nagarajan has also written to the Finance Minister. Bank Employees Federation of India has conducted a demonstration. Reserve Bank of India Employees Association has also issued a statement and demanded his removal from the RBI Board.

Wikipedia describes Mr S.Gurumurthy as an RSS ideologue, power broker, chartered accountant, columnist, and political and economic analyst. He was listed as the 30th among the most powerful in India by India Today in 2017. So, can he get away with whatever he says, as he is close to the PM & HM? This is a dangerous tendency in the country. He had earlier said that the Chief Minister, Edappady Palanisamy and Deputy Chief Minister, are not ‘masculine’ enough. He had stated that many of the judges became judges by giving bribes. In another statement, he had said only 30% of the women in Tamil Nadu have feminine qualities.

The intention of the statements of Mr S. Gurumurthy should be analysed and understood carefully.

One, he wants to divert attention from the failures of the government and create controversies to divert the attention of the people.

Two, he wants privatization of banks but will not call it privatization. He is angry that Unions and Associations are strongly opposing it. Despite announcing in the last budget, two banks could not be privatized yet.

Three, they want the reservation policy to go. With privatization there won’t be any reservations in jobs.

Four, even after 8 years in the government, they want to keep blaming the previous government and hide the write-offs to corporates through the National Company Law tribunal.

Five, they want to weaken the Unions and Association in the banking sector by saying the employees are paid less.

Today, the economy is inching towards a crisis. RBI and the government have miserably failed in managing the economy. The demonetization, GST, and the lockdown without warning have taken a toll on the people. And instead of giving relief, we keep taxing the public. RBI’s own decisions like freeing interest rates for Micro Finance Institutions, Co-lending by banks in collaboration with Non-Banking Finance Companies (NBFC) such as Adani Capital, and forcing banks to lend more to NBFCs who can charge any rate to the borrowers, are affecting the majority of the lower and middle-income groups. The after-effects will be seen sooner or later. Yet, Mr Gurumurthy talks of Swadeshi but practices Videshi.

Privatization is against the constitution, and it has been a monumental failure. Look at BALCO, Hindustan Zinc, Central Electronics Ltd, Pawan Hans, IPCL, and VSNL to name a few. CBI has registered a case under the order of Supreme Court after 20 years of privatization of Hindustan Zinc.

How does a CA not know that 49% shareholding by the government is privatization? There has been a concept of golden share providing 51% voting right, practised in the UK, but that has been a failure. In India, this will be near-total privatisation and only the corporates will benefit.

The reservation policy has been an eyesore for a section of the elite. Though BJP cannot oppose it openly, it is trying to use the privatization route to deprive the people of equal opportunities. More outsourcing, more contract labour, reducing recruitment in the public sector and privatization are the ways being used now.

The telephone banking that Mr Gurumurthy, Mrs Nirmala Seetharaman and the PM talk about is a farce. Even now, bankers get calls recommending loans, but bankers follow the rules. Nowadays, FM is meeting the bank chiefs regularly and giving directions, which has led to further disasters. More non-performing assets will come to light from the next financial year. More write-offs are taking place. In the last 7 years, Rs.10.7 lakh Cr has been written off.

It is not at all true that bank executives and officials are leaving public banks and only the scum and filth are leftover. Public banks have the best talents, who are sought after, even after their retirement.

The fact is people prefer public banks because of the job security, decent salary, perks and freedom. There are people who have preferred to join SBI PO instead of IAS. Even after retirement, public sector employees, officers and executives are often sought after by the private sector. There are numerous examples of this. Prasanth Kumar, the DMD & CDO of SBI was sent as MD Yes Bank when it was in crisis. He has turned around the bank. Ramesh Babu DMD, SBI now heads Karur Vysya Bank after retirement. Arundhati Bhattacharya is on the board of Reliance after retirement. There are so many like these.

Mr Gurumurthy says the salary of public sector banks is lower than the private sector. This again, is not true. On the cost to company basis, it is even better. Yes, it should be at par with RBI, LIC, and NABARD where the basic salary is much higher. But this he should ask the Finance Minister to do, who he was treating as his subordinate in public. In the banking sector, the pension has not been updated as in the case of RBI and the central government employees. This is pending for 2 years with FM. Why this can’t be done? Why a 5-day week can not be extended to the bankers? The younger generation wants work-life balance. By dramatizing the issue, he is discouraging youth to not join the public banks. Even today, 20 lakh youth apply for 2000 vacancies in SBI. If Mr. Gurumurthy really cares, he should ask the Finance Minister to settle the residual issues of the 11th bipartite settlement signed almost two years back after an inordinate delay. The 12th Bipartite is due from 01.11.2022.

Instead of warning Public Sector Banks, Mr Gurumurthy should look at the causes and make a course correction, which RBI can implement. Some of them are:

Mr Gurumurthy has to apologize and walk the talk. Let him really support public banks. Let RBI have a discussion with Unions and Associations on how banking services can be improved. Ask the FM to have a similar exercise.

The executives of the banks have to react. They are being called scums. They should ask the FM to take action. Just appreciating the bank staff and not condemning this act is not enough. The IBA should raise its voice. Otherwise, the after-effects will be bad for the people and the country.