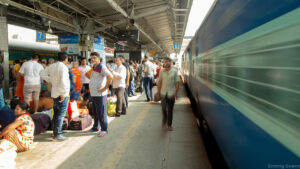 I was travelling from Chennai to Bhopal by Tamil Nadu Express, which is supposed to be a Superfast Express to attend the ‘All India People’s Science Congress.’ It had 8 AC coaches, 8 non-AC reserved coaches, along with 2 coaches without berths and no unreserved coaches. I recalled my days in the eighties when I used to travel by non-AC coaches to Nagaland where I was working. Those days there were more unreserved non-AC and second-class coaches. Poor people could travel very cheap without any reservation. Now they are not able to get a place on long route trains! During the Covid-19 crisis, the union government cancelled most of the passenger trains, which were very cheap.  Most of these trains have not been restored at all.

In addition to that, on April 29, 2022, the Indian Railways announced cancelling 500 mail and express trains and 148 commuter trains. On 1st May, 42 passenger trains were cancelled. This time the reason stated was the movement of coal due to the ongoing coal shortage.

The Economic Times has reported on 5th June 2022 that as per an RTI reply to Mr. Chandra Shekhar Gaur, the Railways has said that it cancelled 6995 train services for maintenance work or for construction purposes while 1934 services were cancelled from March to May due to the movement of coal.

According to the official figures for 2021-22 more than 1.60 crore passengers who had bought tickets could not travel because they were waitlisted.

As per an ET report, the passenger sector requirement in 2019-20 was 8.4 billion and the average drop in the waiting list was 8.9%. On average, the Railway operated 11000 trains per day, a drop from the earlier figure of 13000 trains.

As per the IRCTC helpline on 12th June when I am writing this, 183 trains were fully cancelled and 53 trains were partially cancelled, including Express trains and special trains which became special only after the pandemic to increase the fare. On the 13th 140 trains were cancelled.

The government doesn’t seem to care for the low-income passengers! The Indian Railway Finance Corporation’s profit increased by 38% in 2021-22.

When the Railways were started 168 years ago by the British, the motto was ‘Fast, Safe, train services at affordable cost.’

But what is happening today is the total opposite.

The lowest cost is gone or derived by cancelling the low-cost trains. Instead of developing business, there are plans to hand over the trains entirely to the private sector. Cancelling trains doesn’t mean efficient train services. Trains to rural areas stand cancelled, and only profit has become the objective of running trains. When Mr Lallu Prasad Yadav was the Railway Minister, he turned Railways into a profit-making service without affecting the common man. He was even invited to the Indian Institute of Management for this achievement. But look at the state of things now!

Let’s see the ways in which the passengers are being swindled:

Above all the government wants to privatize railways.

According to the National Infrastructure Pipeline, by 2025, the government plans to hand over 500 passenger trains, 80 stations and 30% of the goods trains to the private sector. These trains will have only AC coaches. No second class or unreserved coaches. The Railway cannot run their own train one hour before as well as one hour after to help private profit. The catering services will also be costly. Everything on the platform including platform tickets will become costlier. Food on the trains has already become very expensive.

Under this, trains will be operated by the Railways, but the Private sector will lease them. Chennai-Sainagar Shirdi BGR is scheduled to be operated from 14th June 2022 under this scheme. The fares are too high, generating profit for private companies. For AC 3, the fare is Rs.5000 instead of Rs.2360 for second sleeper it is Rs.2500 instead of Rs.1280. A company called M & C Property Development (P) Ltd is given the contract. The rate which was intended at Rs.40,47,937 to them was reduced to Rs.29,25,895/- at their request. For what reason? God knows or the Baba knows!

Each train is an economic unit

A long-distance train employs a number of catering and cleaning staff apart from the driver, TT and other railway staff. Vendors can also sell various items on the trains and on the platforms. Sometimes people carry their own food. If you look closely, it is a ‘Mini India’ on travel, leaving out the super-rich with their private planes, helicopters and luxury cars!

It is an economic unit in itself.

The huge railway infrastructure was created out of people’s money. How can you sell them to crony capitalists? All this will come to end with privatisation. The constitution is being violated. Inequality is increasing. The government fleeces us so much, but it does not provide education, free health care, cheap transport and employment. Then what is the need for a government? I am reminded of Nero.

When will the people wake up?

Why can’t they demand these services, which can be provided by taxing the rich with a 2% tax?