Some time ago, Mr Amitabh Kant, CEO of Niti Aayog stated they can’t take care of 140 billion people but will create a few global champions. The Alt news report is quoted verbatim here. “In India, we are too much of a democracy, so we keep supporting everybody. For the first time in India, a government has thought big in terms of size and scale and said we want to produce global champions. Nobody had the political will and courage to say that we want to support five companies who want to be global champions. Everyone used to say, I want to support everyone in India, I want to get votes from everyone”. This was in December 2020.

He and the government in power have really done it, and the banks have been used to achieve this.

On 21st May 2022, the Economic Times listed the 10 most profitable companies in India, as shown below. 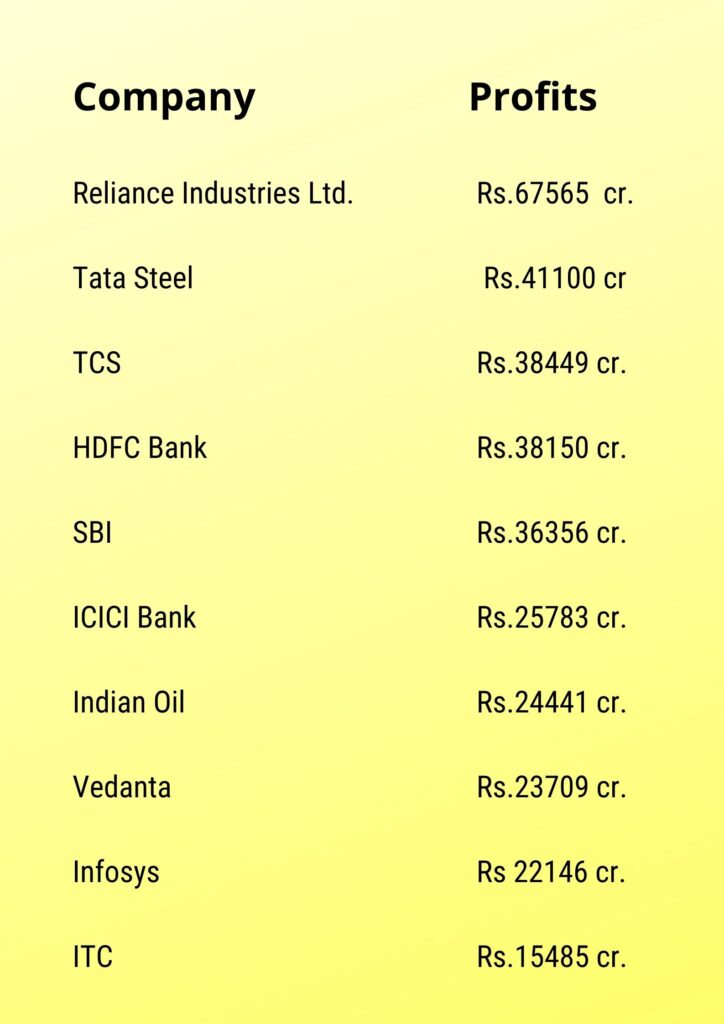 Adani Group is not on the list, as it has shown little profit, but Adani is the sixth richest in the world. Of the list here, SBI and Indian Oil are in the public sector.

These companies are here because of a lot of support from the government, and I would like to highlight just the five most important ones here.

The long term and short-term borrowings of Reliance Industries in 2022 is Rs.266305 crores. That of Tata Steel is Rs.75560 cr and of Vedanta is Rs.53109 cr. Economic Times reported the Tatas getting a loan at 4.5% for buying Air India. The same must be the case for these ‘Global Champions.’

There is no transparency to find out how much loan is given at what rate to which company. Please refer to my earlier articles on Adani and Ambani to know the names of banks which have lent to these two companies.

NCLT helps in the loot

Reliance bought Alok Industries with an 83% haircut. Vedanta got Videocon group with a 95% haircut. Tata Steel bought Bhushan Steel with a 37% haircut. Reliance Jio bought R. Com of Anil Ambani with a 92% haircut.

In 2017, the RBI took a decision to limit loans to one corporate group to Rs.10000 crore but never implemented it.

Import and other concessions

All these corporates get permission to import with little duty. The case of Adani benefiting from coal imports at the cost of State Electricity Boards is well known. The KG basin gas case favoured Reliance over the government-owned ONGC and today Reliance is making a lot of profit from it.

Adani has ports, airports, coal, energy, and retail business and is expanding into every field. The major Adani owned companies are, Adani Enterprises, Adani Ports and SEZ, Adani Green Energy, Adani Transmissions, Adani Total Gas, Adani Power and Adani Wilmar. Now he is on a buying spree, taking over companies where he doesn’t have any presence or experience.

All four have registered companies abroad and can leave India anytime if there is a crisis in their business.

Reliance, Vedanta and Adani have entered the media business to control what we should read, listen and watch.

Today, these oligarchs decide every policy of the country and the inequality is increasing, violating the promises of the Constitution.

Our farmers correctly understood this and raised their voices against Ambani and Adani. This has to be followed up by everyone. If a few corporates control everything, then what is the need for the parliament and the Prime Minister?

It is unfortunate that the banks which give cheap credit to these corporates and write off their loans are charging a huge amount from the common man in the name of bank charges. There is no accountability when the environment is damaged because of the projects they finance. This has to be questioned.

It is dangerous to leave the country in the hands of a few oligarchs who do not care for the people. The wealth they have amassed is at the cost of employees who do not get a share of the profit and crores of customers, including you and me, who are paying exorbitant rates for their products. No ethical business can have more than 10% profit, and cannot naturally grow at a rate of over 10% per annum. They are not ‘Global Champions’ they are ‘Global Exploiters.’

It is time for us to introspect, debate and act.

“The greatest sin is to think that you are weak”–Swami Vivekananda.