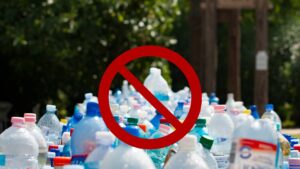 Effective July 1, 2022, the Union government has banned identified single use plastics (SUPs) as mandated by the Plastic Waste Management Rules, 2021. The stated aim of this ban is to arrest plastic pollution by targeting low-utility high-littering SUPs.

Going by industry estimates this ban would target only 2 – 3% of total plastic produced. In fact, the bulk of the problem can be traced to plastic packaging of fast-moving consumer goods (FMCGs) which include sachets and packaging of products like chips, biscuits, soaps etc., which the ban conspicuously excludes.

The ban and the fossil fuel industry

Break Free From Plastic, in its Brand Audit in India in 2021, found that 70% of the 1,49,985 pieces of plastic audited were marked with a clear consumer brand. Some of the top plastic polluting international and Indian brands identified during the audit were Hindustan Unilever, Pepsico, Coca-Cola, Parle, ITC Limited, Britannia, Haldiram’s, Tata Consumer Products etc. Analysts at Kotak Institutional Equities, which has released a report on the ban, claims that the current ban will not affect FMCGs, but one on sachets/pouches/wrappers/laminated tubes could impact their profitability. In 2015, FICCI and strategy consultants Strategy& in their report, ‘Plastic Packaging – the sustainable and smarter choice: Why banning plastic packaging in Indian FMCG is not a viable option’, argued that banning FMCG packaging would affect the processed food industry to the tune of approximately Rs. 90,000 crores per annum, amounting to 72% of the industry.

The 2021 Rules treat SUPs generated by FMCG and non-FMCGs differentially (except for the straws attached to packaged branded beverages). While there is a ban on non-FMCG SUPs, companies in the FMCG category have been allowed to go scot-free since accountability measures like Extended Producer Responsibility (EPR) are only introduced in diluted forms allowing for use of these toxic materials by paying a small fee and staggering transition over 3 years.

Plastic is a petrochemical and in India is produced from crude oil that is imported and then refined domestically. Therefore, the human, environment and climate costs are not limited to the disposal of plastics but extend to its entire life cycle. The FICCI report rightly points out the backward linkage in plastic production which includes petroleum intermediate producers, resin and naphtha producers (both raw materials to plastic polymer), pre-packaging manufacturers, and plant & machinery, mould and additive producers etc, and a ban on FMCG packaging would have a significant impact on this entire chain. Perhaps this is where the untold story lies.

Who wins, who loses?

According to a PlastIndia (2019) report, Reliance Industries Limited is the sole producer of LDPE (a variety of plastic raw materials used in SUPs) and owns 42% of the total production capacity of commodity plastics, used to manufacture SUPs with OPaL in a distant second place.

A February 2022 CPCB notification identifies 18 polymer producers who supply raw materials for SUPs, which is a niche industry. Since the ban is limited to only some SUPs, this will not have a significant damaging effect on these producers since they will continue producing polymers for other SUPs which have not been banned.

Those who have been significantly impacted instead are some of the 30,000 MSME units that manufactured the  plastic products on the banned list. While this is no reason to not ban SUPs, it is pertinent to note that there has been no hand-holding by the government to these MSMEs to transition into another industry. For example, 12 days into the ban and the Delhi Pollution Control Committee has already issued closure notices to 14 units manufacturing the banned SUPs and within the first 9 days total penalties of Rs. 1.37 crores have been levied. The absence of alternative forms of livelihood and employment will undoubtedly contribute to the existing unemployment crisis which looms large over this country. Further, many of the identified SUPs which are banned are used by small eateries, other small enterprises and street vendors. This ban will therefore largely impact the MSME and informal sector both on the production and use side, leading business to be taken away from the informal to the formal sector, a trend set in motion by demonetisation and GST, and boosted by lockdowns during the pandemic. All this while making an insignificant and irrelevant dent in plastic use and pollution in the country.

Banning SUPs used by big corporations would mean upsetting billion-dollar industries, a move that the Indian government has not even remotely considered yet. If the government indeed wants to put money where its mouth is, it would focus on envisioning a retail system which will take us away from the use-and-throw economy to one which is designed for reusable and sustainable packaging and which considers the interests of not big corporations but smaller players, the end user and fundamentally, the environment and climate.

The original article published in Indian Express can be accessed here.