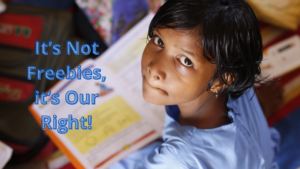 On 3rd April, the Prime Minister held a meeting with the Secretaries of various departments.  As per reports, several top bureaucrats flagged their concerns over populist schemes and freebies announced by political parties during assembly elections, going to the extent of warning that the state could be heading the way of cash-starved Sri Lanka or Greece if the trend remains unchecked. These include  BJP ruled States too.

Ecowrap, Report of the SBI Research Foundation dated 18.04.2022 laments that, “A collateral casualty of pandemic seems to be the fiscal situation of states, as our comprehensive analysis of finances of 18 states demonstrates that the average fiscal deficit as a percentage of GSDP has been revised upwards to 4%.”

​The same report also says, “the State’s Capex in FY 22 grew by a whopping 36.2% in response to the need to upscale health infrastructure in the face of the multiyear nature of pandemic. Capex outlays have also been increased for Urban Development, water supply and sanitation, irrigation and transport.”

​Will it be right to cut down on these expenses? Ecowrap has no answers to this question, it only maintains,​“Committed expenditure of a state typically consisting of expenditure on payment of salaries, pension, and interest is steadily on the rise in the last 3 years.”

​Can any State reduce this expenditure? Why do we pay taxes? Why are we paying duties and surcharge on petrol, diesel, and natural gases? What is the role of the State? Is it just for policing? What happened to the idea of a welfare state? If states don’t spend in these areas, the people are going to reject them.

However, N.K. Singh, Chairperson of the Fifteenth Finance Commission, has stated that political competition over such “Sops” is a quick passport to fiscal disaster.

​So there is an unswerving effort to stop freebies and reduce the expenditures of the States which will directly affect the common man.

What are these freebies?

Subsidy in Public Distribution System, old age pension, widow pensions that are a  pittance, electricity subsidy for farmers, apart from the credit of Rs.6000 to farmers’ accounts and credits to low-income groups and such necessary schemes are being called freebies. These have become an eyesore for these bureaucrats and the government.

When the wealth tax was abolished, Corporate Tax was reduced, huge loans were written off for the Corporates, and large swathes of land were made available to them, with additional support from the Viability Gap Fund; all these were not seen as freebies by these so-called intellectuals advising the government.

Why do we have a government in the first place?

Fiscal deficit per se is not bad if utilized properly. ​India is a Union of States. Without the states, there cannot be a Union, but slowly the powers of the States are being usurped. Now after GST their revenue has gone down. That’s why they are demanding an extension of GST compensation for 5 years. The biggest contributors to the GST, states like Maharashtra, Tamil Nadu, Gujarat & Karnataka are suffering. If this idea of restricting their finances continues, in all likelihood there will be demand for autonomy or even separation from the Union.

​Those who talk of freebies should know that the country is run by the taxes we pay, the most important of which is the GST, which is paid on every commodity we use.

For continuing the welfare schemes in the interest of its citizens, the government should think about the following ways to supplement its income.

The poor are not asking for freebies. They are demanding their rights; the rights guaranteed by the Constitution. ​The Goebbels in the bureaucracy should understand the reality. They are pushing the economy towards a crisis due to total mismanagement that started with demonetization, GST, a lockdown without notice and huge loan write-offs in favour of the corporates.

All of us need basic amenities to live a life of dignity, and these are not freebies. They are our right!