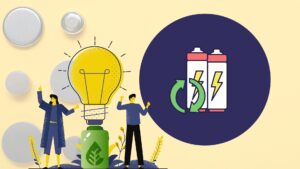 Electric vehicles (EVs) have recently become the buzz word for all the wrong reasons. Almost half a dozen incidents of EVs catching fire have been reported in India since late March of this year. The benefits of lower running costs, zero tailpipe emissions, environment friendly etc. went up in flames with public opinion turning skeptical towards the industry that is valued over $163.01 billion globally. Although companies have yet not issued the reasons behind these fires, expert opinions based on initial investigation reveal that one of the primary reasons behind these fires could be the element that makes EVs so efficient and fascinating- lithium-ion (Li-ion) batteries. These batteries have a high energy density which render these cells to become unstable in certain conditions. Three scientists who were involved in the development of these batteries were awarded the Nobel Prize in Chemistry in the year 2019. The awarding committee believed that this feat has laid the foundation for a fossil fuel-free economy.

Lithium was discovered by Johan August Arfwedson in 1817 and holds a very important place in the periodic table as it is both, the lightest metal as well as the lightest solid element. Lithium is highly reactive and flammable and this was the reason why this metal became laboratory favorite of scientists from various domains. The production and use of lithium underwent several drastic changes in history. The first major application of lithium was in high-temperature lithium greases for aircraft engines and similar applications in World War II. The demand for lithium increased dramatically during the Cold War with the production of nuclear fusion weapons. After the end of the nuclear arms race, the demand for lithium decreased for a while and was revived in the new millennium after the development of lithium-ion batteries and has been rising ever since. Besides their industry applications, lithium also has medicinal value and is used in the treatment of bipolar disorder in humans. Lithium is now one of the contenders in the geopolitical competition for a world running on renewable energy and its increasing dependence on batteries. From charging our smart phones, laptops to powering our electric cars, batteries are the modern go to for everything making lithium indispensable for the greener future we imagine. But can lithium really replace fossil dependent economies and does its commercial use hold promise of a greener and cleaner future?

Vulnerabilities associated with lithium and its application

When we talk of energy there can be various categorizations and various dimensions of understanding different energy sources. One such categorization is renewable and non-renewable energy. Renewable energy is crucial to fighting climate change however, renewable energy is largely dependent on natural resources of the earth that are non-renewable in nature. Comparatively newer forms of energy generation like the nuclear energy and lithium cannot be distinctively called as renewable energy as they are dependent on non-renewable materials that make their generation possible. World reserves of lithium are limited and the countries with largest lithium reserves (almost 50%) are found in just 3 countries in South America also popularly referred to as the ‘Lithium Triangle’ countries. Although lithium resources are being constantly discovered in other parts of the world but it serves as a good example of the miserable reliance of renewable energy on non-renewable natural resources.

Reverting back to the question posed at the beginning of the article about lithium being clean source of energy generation, it is worth mentioning that lithium extraction is a highly carbon intensive process. Removal of green cover from mining areas combined with the use of heavy machinery that mostly use energy generated from fossil fuels outrun the possible impacts the EVs can have in reducing carbon footprint. Additionally, the production of an EV battery leads to release of more carbon dioxide that that used in a traditional car. Associated with the similar concern is the sources used by EVs to charge their batteries. As the production and use of EVs increase so will the demand for electricity to charge them, as long as that electricity is generated from coal and other fossil fuel, we cannot really call the use of EVs to have a positive impact on the environment. Besides, air pollution, the process also negatively impacts water resources. Lithium extraction uses significant amount of water, approximately 500,000 gallons per ton of lithium and further worrying fact is that ‘Lithium Triangle’ countries are some of the driest places on earth. This over extraction of water is leading to extreme pressures on the water resources of the regions threatening the availability of water for the local communities and other flora and fauna. In an era of escalating climate change and threats of water insecurity over many places in the world this bargain of generating energy at the expense of limited water seems depressing.

The process of lithium extraction requires digging of holes which are left open for months for liquid evaporation. Such a long period of time increases the possibility of groundwater contamination, destruction of habitats taken over for mining activities and loss of fertile land for cultivation. Mining waste generated from the extraction process is equally worrying. Also, a very minimal percentage of lithium-ion waste is recycled currently. Our gadgets containing Lithium ion end up in dump yards and landfills. Because lithium cathodes degrade over time, they can’t simply be placed into new batteries. This is the reason why recycling most mobile phones is not cost effective. Associated is the risk of accidents in lithium generation, handling and use because of the metal’s high flammability which was so evident with electric scooters in India. Mining waste such as sulfuric acid discharge and the uranium pose threat of causing several diseases including cancers. Overall, it can be said that the extraction process of lithium causes several irreversible damages to the local environment and communities.

While projecting lithium-ion batteries as the next revolutionary green energy source, what is almost never spoken about is the ethical breaches that happen along the way. Often materials are procured using child labour which is grievously evident in this case. One of the main elements used within lithium batteries is Cobalt, most of which is found in Democratic Republic of Congo (DRC), a country that houses the third largest population of poor people globally. This limited supply combined with deplorability in the nation has led to a plethora of interested parties engaging in unlawful and unethical modes to procure the element. Child labour is rampant in Cobalt extraction where children are subjected to digging the ground by hand without wearing any protective gear and there are also instances of loss of life at such sites. Apple, Google, Tesla, Microsoft among others have also a lawsuit filed against them for alleged profiteering from use of child labour in cobalt supply chains of DRC. Ultimately, inspite of the bright future that lithium batteries hold for the world, one cannot completely outweigh the distressing parts that come with it.

The way forward in making lithium really cleaner and greener will rely heavily on the companies using it. While there are some solutions offered like recycling, reuse of these batteries but there is greater need to make policy level changes that regulate how lithium is sourced, mined, procured, used and disposed. As the craze of owning EVs take over our societies, the use of lithium will only expand. It will be interesting to see how a renewable energy source dependent on a non-renewable mineral solves the question of energy that “is central to nearly every major challenge and opportunity the world faces today…”

The author is an Independent Researcher focusing on Environmental issues.