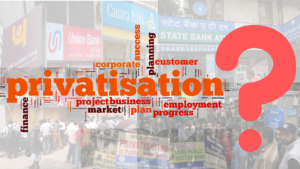 Amendment of the banking law has been enlisted in this session of parliament. This is a reversal of the nationalization effected in 1969 and 1980, taking over private banks from business houses that were lending to only their kith and kin. As you can see from the total agriculture credit outstanding, that was just 2%.

Dr. Soumya Kanti Ghosh, Chief Economist, State Bank of India wrote in the Economic Times on the 21st of January 2015,”Chastising public sector banks for every failure is a comedy of errors- public banks have paid back many times the investment to the Govt.”  So it is not true that Govt is spending its money on the capitalization of banks. In the last few years, the capital was provided to the banks only for writing-off corporate loans. If the recovery mechanism is strengthened, there is no need for capital inclusion, as last year all public banks have shown a net profit.

Some of the objectives of nationalisation were wider territorial and regional spread of branch network, better mobilization of savings, reorientation of credit, deployment in favour of small and disadvantaged classes, removal of control by a few business houses, and professionalizing bank services.

These have become more relevant today.

No Watch Dog in the Board

It is the business houses that want control of the banks. RBI has increased the shareholding rights of private investors from 15% to 26%. The immediate beneficiary is Uday Kotak of Kotak Mahindra. Now they are processing the recommendations of a committee to provide licences to corporate houses. The beneficiaries will be Ambanis, Adanis, Tatas, and a few others. They are the ones who want the privatisation of banks.

Why are there complaints of poor customer service in Public Banks?

The Govt policies have shifted focus from small credits to large credits. The employee strength has been drastically reduced. The number of branches is decreasing after the merger of the banks. While SBI has 1680 customers per employee, HDFC has only 467, ICICI has only 350 customers per employee. The lowest per-employee customer ratio in public sector banks is 1348 in the Canara Bank and the highest is 2500 customers per employee in the Bank of Maharashtra.  The lowest number of customers per employee among private banks is 325 in the Axis Bank, and the highest is 923 in Federal Bank. So, we can see that public sector banks need a huge recruitment drive.  There are around 11 lakhs business correspondents running Customer Service Points.  They should be regularized and CSPs should be converted into branches. Basically,  the solution is to change the policies in favour of a larger majority, increasing the number of branches and increasing the number of staff.  What is being attempted in the name of privatisation is handing over more than Rs.100 lakh crore deposits to the corporates, which is a huge risk for the depositors and will direct small borrowers to the moneylenders. This comedy should stop.

This bill should not be introduced.