Mukesh Ambani and Anil Ambani divided their companies under the Reliance empire in 2005. Brothers continue to use the same Reliance brand. Reliance is known for malpractices as explained in books like Ambani & Sons and Polyester Prince by Hamish Macdonald, No Regrets by Dr. D.N. Ghosh (former Chairman, SBI), Feast of Vultures by Tony Joseph, Exposure by Auditor Gurumurthy, who is now in RBI Board, Gas Wars by Paranjoy Thakurta and many others.

Now Anil Ambani declares his companies bankrupt and Mukesh Ambani buys them at throw away prices but banks lose a lot in the name of haircut blessed by National Company Law Tribunal.

Take one example of Reliance settlement. Though the Indian banks were not allowed to go to NCLT, a Chinese bank, Exim Bank of China, went to the NCLT against Reliance Communications. The lenders agreed for a resolution plan for Rs.23000 Cr against loan of Rs.49000 Cr. Now UV Asset Reconstruction Company has placed bids for Rs.14700 Cr for assets of R Com and Mukesh Ambani’s, Reliance Jio has made an offer of Rs. 4700 Cr for tower and fiber assets. Both are closely connected. Together they bought Alok Industries with 82% haircut. Earlier Reliance Jio had offered Rs.7300 Cr. Anil Ambani owes SBI 4800 Cr, BOB 2500 Cr, Syndicate Bank 1225 Cr, PNB-1127 Cr, China Dev Bank 4900 Cr, Exim Bank of China-3356 Cr and Standard Charted Bank Rs. 2100 Cr.

Reliance Power was given sole distributorship in suburbs of Mumbai in 2017 but sold it to Adani Power. It has 50 subsidiaries. It has many thermal gas based Power projects and renewable energy projects.

Reliance Capital has asset management, mutual funds, life insurance, general insurance, commercial finance, stock broking, wealth management etc. It claimed to have 20 million customers as on 1st May 2017. It also has a NBFC. There are many subsidiaries too.

Reliance Entertainment is into fitness, web series, TV, animation, digital and gaming. It has 25 subsidiaries.

It also has external links with RMW Vimeo Showreel. Reliance group of Anil claimed assets of US$ 43.6 billion in 2016 and 750,000 employees in 2018.  His net worth is shown as US$1.78 billion (Rs.133.5 billion) as on April 2019. He was voted as best role model among business men by India Today in 2006, also best business man of the year by TOI. Now he has claimed his net worth as zero in a London law suit filed by Chinese banks.

The Company has acquired few companies abroad also. The Accounts of Anil Ambani had become stressed assets for long but came to the surface in 2017. The outstanding loans exceed Rs.1 lakh crore. In 2015, France waived € 143.7 million to a French registered telecom subsidy of Reliance communications. This was after the Raphael deal was initiated. Without any experience in aeronautics Reliance Defense became part of the Raphael deal which is forgotten now. With insolvency, will Anil complete the deal?

Lot many things require to be answered:

1. Why Banks did not declare the loans as NPA in time?

2. Why RBI closed its eyes?

3. What are the investments abroad by Anil Ambani and his family members?

4. Why Anil’s Companies are sold to Mukesh with huge haircut? Is it not a vested interest?

5. Is the division of Reliance empire into two done with an aim to loot the country?

6. What guarantee is there that Mukesh Ambani’s companies will not default? They are the biggest borrowers in the country.

Are the brothers having the last laugh at the cost of banks and people’s money?

Viruses will come and go but we cannot remain mute spectators to the day light robbery. Ghanti Bhajao! 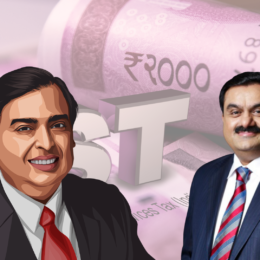 If the information is perused by our Finance Minister, she will take strict action and recover the loss incurred by the PSU Banks and will take action against those higherups of the Banks, RBI and concerned govt departments.
I thank Mr.Thomas Franco for his hard work in compiling the particulars and his concern for our country’s interest.

When the whole ruling system of the country,is with the looters,viz.govt., the court,RBI,etc,etc.,which God will save us.

If this trend is allowed to continue what will happen to Indian economy. Respected Sri Gurumurthy reputed Charted Accountant should suggest some solution for these NPA s of all Big Industrialists.As a RBI board member he must be in a position to advice Govt of for necessary action.