We have come across alcoholics selling property to have their drink. The central government seems to be doing similar things. The Public Sector is like the house constructed with great ambition. But now, it is being sold on a platter to a few favourite corporates and the money is being used for Central Vista, Eight way lanes, discoms, debt servicing etc. The nasha (intoxication) they get by serving the corporates seems to be more important. The Prime Minister has been giving statements like “the Government has no business to be in business”, “The Public Sector was born to die – in a few hours, or few days or few years. Either allow them to die or privatise”.

Already 12 ports and 7 airports are given to Adani. IPCL, part of gas basin, telecom, defence etc are given to Ambani. Mining of minerals is given to Vedanta’s Agarwal. Thousands of acres of lands are given to Patanjali’s Ramdev.

The Budget speech of FM says “Redefinition of MSMEs, commercialisation of mining sector, agriculture and labour reforms, privatisation of public sector undertakings, one nation one ration card as notable reforms” as ‘Atma Nirbhar’ package whereas these are completely against self-reliance.

Two vaccines of private sector are launched and Rs. 35000 crores allotted but four very successful public sector pharmaceutical companies are killed. Cricket success in Australia is lauded in the Budget speech. I wonder the relevance of it in the budget.

The six pillars stated in the Budget are:

But the focus seems to be only on minimum Government, the favourite of the IMF and World Bank.

A new centrally sponsored scheme, PM Atma Nirbhar Swasth Bharat Yojana with an outlay of Rs.64180cr over 6 years is announced, but the allotment for this year is NIL. Who are you fooling FM? Similarly, for Swachh Bharat Swasth Bharat Rs.141768 cr is announced for 5 years.

Is this an Annual Budget or  a five-year plan? PLI Schemes to create manufacturing global champions provided Rs.1.97 lakh crores in 5 years. Doesn’t it look like a mockery?

Rs. 20,000 have been allotted to start a Development Finance Institution which we have been demanding for a long time. The ambition stated is Rs.5 lakh crore loan portfolio in 3 years which is totally inadequate.

Without any shame the Finance Minister states that a special purpose vehicle (SPV) will be created to sell / provide on concession or similar means surplus land with Govt and Public Sector Enterprises.

Is it not the first step to hand over these assets to corporates? You are selling everything. Do you have the authority FM?

Capital expenditure of Rs.5.54 lakh crore is welcome but inadequate in the post pandemic situation. It may go to benefit corporates. Instead of rural roads and infrastructure the focus is on Bharat Mala and Sagarmala.

Seven projects by major ports are going to be privatised under PPP. Shipping companies will be provided subsidies. Both these will benefit Adani. An independent gas transport system operator will be set up. May be for Ambani? The government would support a world-class fintech hub at GIFT- IFSC-more freebies for the  Gujarati businessmen? A separate permanent institutional network is going to be setup for the corporate bond market. For which business house, is it?

The FM has proposed to increase the FDI limit in insurance from 49% to 74% and allow foreign ownership. Is it not a clear-cut plan to sell LIC to foreign companies which have a miserable track record? Relate this to another announcement of IPO of LIC. This session itself will bring amendments in the LIC Act to offer initial public offer. That is the beginning of the privatisation of LIC, the only company which provides 95% of the profit as bonus to policyholders, the company which provides money for one third of the budget, five year plans and the company with the highest claim ratio. 40 crore policyholders will be affected by this.

A bad bank is a bad idea. It is to clean up NPAs of banks, write off the loans and make their balance sheets clean and private companies become clean by writing off their loans. That will pave the way for them to buy banks.

The FM proposes an e-court system by launching data analytics, artificial intelligence, machine learning driven MCA 21 version 3.0, which will have modules for E-scrutiny, E-adjudicating, E-consultation and compliance management. This will pave the way for all underground dealings.

Two public sector banks and one general insurance company will be privatised. From banks the FM estimates Rs 1 lakh crore. The banks are likely to be Punjab National Bank and Bank of Baroda with market capitalisation of Rs.41386 cr and Rs.37172 cr respectively. Ultimately more banks will be sold.

One general insurance company is also going to be sold. An earlier promise was made to merge four of them, but that didn’t happen.

The FM also says on the recommendations of the fifteenth finance commission centrally sponsored schemes will be brought down.

The government will promote multi state co-operatives and have a separate administrative structure. This is to take these cooperatives out of state government interventions.

On the matter of MSP, the FM, uttered a lie that 1.5 times of the cost of production is provided for all commodities and the procurement is continuing.

The agriculture credit target is increased to Rs.16.5 lakh crore which is the usual 10% increase and banks will renew the kisan credit cards with accrued interest and achieve the target. The farmer will not get any cash.

An increase of Rs.10000 crore under Rural Infrastructure Development Fund (RIDF) of Nabard and Rs.5000 cr to Micro Irrigation Fund is provided which is very inadequate.

The margin money to be provided by the borrower under the Start-Up India scheme is reduced to 15% from 25% for SC/ST & women. But without infrastructure, marketing support and adequate seed money as provided in China, Israel and other countries most of them are failing because of which banks are financing existing entrepreneurs instead of real Startups.

Just Rs.15700 crore is provided to the sector which can create the largest employment. Mr. K.E. Raghunathan, a spokesman of MSMEs and convener of Consortium of Indian Associations laments that nothing really has been done to the real micro and small industries which are struggling.

The FM says that the New Education Policy has had a good reception which is totally incorrect.

For higher education an education commission is going to be set up with four vehicles for standard setting, accreditation, regulation and funding innovation and R&D. This is for accommodating the RSS ideology.

In addition to 100% tax exemption already provided for investment in infrastructure additional concessions are provided.

Minimising presence in PSEs and financial institutions is the goal.

The 4 strategic sectors are:

In non-strategic sectors all CPSEs will be privatised or closed. The PSEs provide every year more than the Rs.1.75 lakh crore target for disinvestment. Why sell the golden goose?

The interest payments is Rs.809701 cr and fiscal deficit (loans to be availed) is Rs.1506812cr. Our external debt of Rs 382829 cr is already too high. It’s time we come out of the IMF and World Bank and use huge money with banks which are not given as loans.

The budget clearly shows the following:

If everything is for sale and if the government is not going to perform its duties for its citizens why is there a government? Why don’t we privatise the parliament too? Why do they collect taxes from all of us? Time for the finance minister and her master to go. 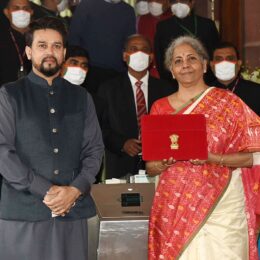 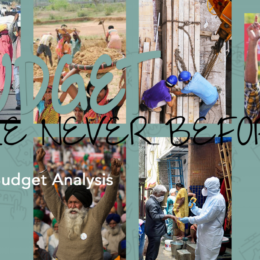