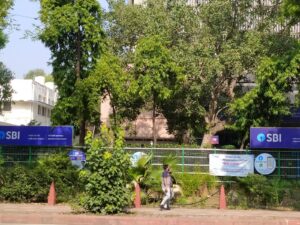 State Bank of India is a Public Sector Bank in which the Union Government holds a 54% share. It has to be independent, and it has acted independently in the past.  For example, Mr R.K. Talwar as chairman of the bank, refused to give a loan recommended by Mr Pranab Mukherjee, the then Minister of State for Finance in Mrs Indira Gandhi’s cabinet. Mr Pranab Mukherjee was requesting a favour to help Mr Sanjay Gandhi, the son of the Prime Minister. Many other chairmen have given frank feedback to the government. Mr D.N. Ghosh has shared many such incidents in his book ‘No Regrets.’ But today, SBI is becoming the voice of the government.

SBI has an economic research department at its corporate office with a few well-qualified economists. Dr Soumya Kanti Ghosh is the Group’s Chief Economic Advisor. The department brings out a monthly report called “Ecowrap”. In the past, they used to bring out critical reports and Dr Soumya Kanti Ghosh used to write well-researched articles in newspapers.

He wrote the following in the Economic Times on 21st January 2015:

“Chastising Public Sector Banks for every failure is a comedy of errors. Public Banks have paid back many times the investment to the Govt”. His articles used to be critical in the past, like “New RBI Governor Urjit Patel should ensure judicious communication for policy effectiveness” which he wrote in 2016.

But of late, maybe due to some gag order, the articles and Ecowrap reports only toe the line of the government. The latest report published on 7th October 2022 titled, “Towards a New India: Freedom from freebies”, is shocking. There were many sharp criticisms on Twitter. One user questioned, “What about the freebies given to corporates through write-offs by SBI?”

Of course, as usual, the report comes with the routine disclaimer, “Ecowrap is not a priced publication of the bank. The opinion expressed is of the Research Team and does not necessarily reflect those of the Bank or its subsidiaries. The contents can be reproduced with acknowledgement. The write-up on Economic & Financial Developments is based on information and data procured from various sources, and no responsibility is accepted for the accuracy of facts and figures.  The Bank or the Research Team assumes no liability if any person or entity relies on views, opinions or facts, figures and findings in Ecowrap”.

Unmindful of these, newspapers have reported this as an opinion/recommendation of SBI.

There is more such reporting.

Can the Supreme Court take this as a recommendation from the SBI? SBI as Public Sector is an arm of the state. How can it go against the Constitution?

The report says “It is difficult to define freebies & welfare schemes in India as there is a thin difference between freebies and entitlements. Freebies do not differentiate between those who can afford them and those who shouldn’t be beneficiaries. Entitlement or welfare on the other hand is a bona fide benefit for those who can’t afford it. A clear example is free power to everyone is a freebie, while free food grains for the 80 crore population during the pandemic is an entitlement”.

Well, then what is the reduction in corporate taxes – Is it not freebies to the rich?

What about the SBI loan to Tatas for buying Air India – Rs.10000 crores at 4.5% interest? Was it not freebies?

What about the announcements the Prime Minister makes in the States just before the elections? Are those not freebies?

Is it not for the 80 crore people who are poor? Smartphones, laptops and cycles are for the students for whom education has not become free even after 75 years of Independence. Health care is not free for the 80 crore people. There is hardly any social security for the people of this country. Let those economists look at other countries where education, healthcare, electricity and transport are free and where there is social security for the unemployed, elderly and physically challenged people.

Think about who pays the taxes. Are they not the same 80 crore people paying huge GST? And paying tax on petrol, diesel, and gas? Or paying taxes on the transport system–be it buses or rail?

The report also criticizes the states of Chhattisgarh, Rajasthan and Jharkhand for switching over to the Old Pension Scheme. They have forgotten West Bengal which did not adopt the New Pension Scheme though the Union Govt (NDA)  introduced it in 2003 and implemented it in 2004.

Do they know the famous D.S. Nakara judgement? “Pension is not a bounty or gratis. It is deferred wage.  No employer can say that they don’t have the capacity to pay. It should be 50% of the last drawn pay.”

The report talks of freebies announced in the states. It does not talk about what is announced by the Union Govt. As already stated, the PM goes about announcing several projects for the election-bound states. The authors should read the election manifestos of Mr Modi, who is talking about the freebies now. Recently he has made announcements in Gujarat for projects amounting to more than Rs.1 lakh crores as the State is going to elections before 18th December.

Ecowrap reports should be critical and give good suggestions to the government and the RBI instead of simply toeing the line. SBI should not become the voice of the government. Otherwise, over a period of time, they will lose their credibility.