Long time ago there was a Malayalam film “Ningal Enna Communist Aakki”– You made me a Communist.  The happenings on 26th January and the callous attitude with which the government is treating the farmers for more than two months now, reminds me of that, and I feel the government is going to make more Khalistanis, Tamil Chauvinists etc and the demand for separate statehoods is likely to raise again.

I went to the Singhu border on 25th January 2021. I could see people visiting the site as a pilgrimage. Young, old, physically challenged, husband and wife carrying young children on both their shoulders and local people using it as an opportunity for their petty trade. Health care, food from langar, mobile charging and even shoe polishing was free. I saw ‘Nihangs’ with their horses and swords, the warriors of the past but now with rusted swords. People’s bags were being checked by the volunteers. There was certain discipline, enthusiasm, determination, care, above all humanity was visible. Community living, rich and poor, in precarious hygiene. Mud, water, waste, flies, indifferent attitude of the State Govt was also visible. The locals were supporting the farmers with water, bathrooms, washing machines etc as they were helping their own families.

There were also many battalions of Police with different uniforms, different weapons and different vehicles used by the Rapid Action Force.

I recall my college days as student leader. Managing hundred students was easy, five hundred was possible but when it crossed thousand unmanageable leading to violence and lathi charge.  I wonder how, for more than two months, more than a lakh of farmers could keep their anger under control.

Such discipline rattles the people in power.  The Home Minister is known for the riots in Gujarat. Probably he anticipated people to become violent. But, that didn’t happen. So they used the police.  Routes were changed, a small group of protesters reached the Red fort which is guarded by Police and Army without much difficulty. They climbed up as they did on the Babri Masjid. Godi media said they hoisted khalistani flag, whereas in reality it was the Sikh religious flag. But it was not to be hoisted at the Red fort.

Police prevented tractors in the accepted routes.  On 26th I was in Shahjahanpur.  Tractor route was allowed from Shahjahanpur to Manesar and back.  People with tractors from Rewari also joined.  Ms. Medha Patkar was there at Shahjahanpur not at Delhi, but now a case has been filed against her for the Red Fort incident.

Even there the police blocked the roads and stopped the rally, but the leaders kept their cool. Dr. Ashok Dhawale, President AIKS, Mrs. Mariam Dhawale, General Secretary AIDWA, Dr. Dinesh Abrol, Nation for farmers, Mr. K.K. Rajesh MP, Ms. Kavitha Srivastava, PUCL, MKSS leaders and farmers from all over the country – from Manipur and Nagaland to the state of Kerala.

Police blocked roads including Delhi- Jaipur Highway to inconvenience people, to create anger among the citizens. But the farmers kept their cool.  People were giving them water bottles at places.  Langar provided food to anyone who needed it.  At the Delhi border people were showering flowers.  There was no intention of violence, but the Govt encouraged Deep Sidhu and others to break the struggle.  They could not succeed. The leaders have condemned violence and disowned those who did it.  But the culprits are not arrested.  Instead, cases are filed against leaders who are leading a peaceful protest.  What they tried in Ghazipur has boomeranged.  Mr. Rakesh Tikait has turned UP into the real protest zone.  It’s bigger than the Singhu border where Punjabis and Haryanvis are more.

Now more people are reaching Singhu and Tikri. Shiromani Akali Dal has asked its followers to reach the protest venues, and they are doing it. The numbers are swelling. The false propaganda by BJP is countered with real true incidents.

The anti people Governments always use the police for satisfying their egos.  We have seen it in Tamilnadu when the Jallikattu agitation came to an end.  For no reason people were beaten up.  Just for ego satisfaction.  At Tuticorin during the Sterlite agitation, without any provocation police pointed the guns and shot innocent people including 19-year-old Smilin.  In UP, it is the order of the day.  But this can’t bring an end to the peaceful protest. Jallikattu Continues.  Sterlite is closed. There are many other examples.

But Police and Army atrocities have led to movements like the terrorist movements in Jammu & Kashmir, in Nagaland, in Manipur, in Assam, in Punjab and countries abroad.  The problem does not end. The problem explodes.

It’s time, the Govt gives up its ego.  Stop foisting cases, Negotiate and end the struggle. It has happened many times.  Recently Kerala Govt withdrew its order on social media when people raised their voices. In 2006, the then Finance Minister P. Chidambaram who went on TV saying he would arrest the SBI Union & Association leaders as they were on indefinite strike demanding improvement on pension, later got into an agreement and appeared on the TV again and announced that the issue is settled.  He still has a grudge against the unions, but he had to give up ego and settle the issue

This same Govt had a better sense in 2017, when they withdrew the FRDI bill.  Now the economy needs recovery.  Reports that are coming are alarming. Agitations lead to economic losses. February, March is the time for business to flourish. Time for Bank credits to increase. So the government should act fast.

Parliament can do it easily.  Please don’t make people say, “You made me a Khalistani”. 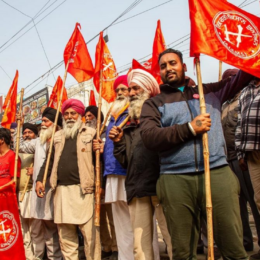