We just celebrated the 74th Independence day. On the Midnight of 14th August 1947, Pandit Jawaharlal Nehru while addressing the Constituent Assembly in his famous speech, “Tryst with destiny”, underlined that the service of India means the service of the millions who suffer. It means the ending of poverty and ignorance, disease and inequality of opportunity. He also stated that as long as there are tears and suffering so long our work will not be over.

So it is the responsibility of the state to remove poverty and ensure equality.

In the Global Hunger Index, India ranks 103 out of 119 countries behind Nepal, Pakistan and Bangladesh.  In Income Inequality India ranks 95 out of 157 countries as per CIA world fact book. In economic freedom India ranks 120 out of 180 countries. What has the state done? India is supposed to be a welfare state.

What is a Welfare State?

The welfare state is a form of government of which the state protects and promotes the economic and social wellbeing of the citizens based upon the principles of equal opportunity, equitable wealth and public responsibility for citizens unable to avail themselves of minimal provisions for a good life.

Is it not necessary for every state to be welfare state?

Emperor Asoka put forward his idea of welfare state in the 3rd century BCE. He sent many missions to propagate the Dharma to Egypt, Greece, Sri lanka.

Roman Republic Empire started regular grain distribution in 123 BC. 320000 people which was 32% of the total population received wheat, bread, olive oil, wine and pork. Free entertainment was also provided to people by the state.

Adam Smith in his book, “An Inquiry into Nature and Causes of the Wealth of Nations” outlines 3 responsibilities to the state.

2. Protect from injustice or oppression by other members

3. Duty of erecting and maintaining certain public works and public institutions which will not make profit.

The present Indian state is failing on all the three counts.

Our Constitution in Directive Principles of the State Policy in Act 38(1) states:

“The state shall thrive to promote the welfare of the people by securing and protecting as effectively as it may a social order in which justice, social economic and political shall form all the Institutions of the national life.

During the independence struggle, promises were made that the state shall provide “education for all, health for all, land for all, employment for all etc.”

If the state cannot provide these to citizens what for we have a government? What for we collect taxes?

The famous Bombay plan of the richest of this country also wanted the government to create public sector undertakings and public services. So the state started schools, hospitals, electricity generation and distribution, steel production etc.

In 1951 Indian Railway was nationalised to provide cheap passenger and freight services.

Hindustan Steels Ltd was started in 1950 and Steel Authority of India Ltd in 1956.

Coal India Ltd was started in 1951 with representatives from labour unions also.

Telecom was handled by government to provide telegraph, telephones upto the last mile.

5 pharma companies were started to produce cheapest vaccines and drugs.

Food Corporation of India was started to procure rice, wheat and cereals and distribute to people so that we don’t face another famine like the Bengal Famine.

Oil companies which were owned by foreign companies like Esso, Burmah Shell & Caltex were Nationalised between 1974-76 in National Interest.

On 19th July 1969, private banks numbering 14 were nationalised to reach banking services to larger majority in the country.

Imagine what will happen?

➢ If electricity is totally privatized can majority in the country, the 60% which owns less than 5% of the wealth afford?

➢ If railway is privatized will it be possible for the 2.3 crore people who travel per day afford? Will lakhs of petty traders have business?

➢ If oil companies are priviatised what will be the price of Oil and Gas which are essential for all?

➢ If LIC is privatized will the customers who get 95% of the LIC’s profit as bonus on their policies get that bonus?

➢ If BSNL and MTNL are privatised will we have cheap land line, internet and mobile connections?

The government privatized Videsh Sanchar Nigam Ltd which was taken over by Tata Telecommunications which sold the land and buildings, made huge profit and left the field as they don’t want to compete with Reliance.

Indian Petro Chemicals Ltd provided 26% share to Mukhesh Ambani initially and now it is no more.

See what happened to Global Trust Bank, Centurion Bank and now Yes Bank. Many of the private banks have Rs.10000/- as minimum balance and charge you if you go to their premises for any transaction. Do they lend to the common man?

Privatization for whose benefit?

Ambani’s, Adani’s, Agarwals (Vedanta) and a few more oligarchs. If these people are going to manage every sector then what for we need a government? What for we need Parliament?

It’s time to come to streets, it’s time to voice our concerns before it’s too late. We need movements like Yellow West Movement.

‘Fist they came for the Socialists and I did not speak out – because I was not a Socialist.

Then they came for the Jews and I did not speak out because I was not a Jew.

Then they came for me and there was no one left to speak for me.

Pastor Martin Niemoller (During the days of Hitler) 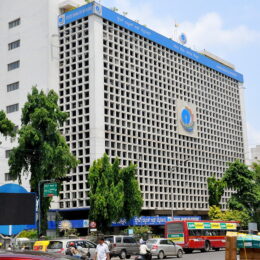 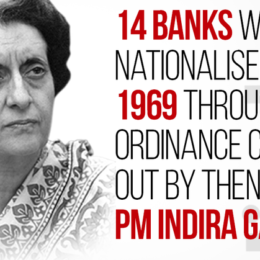 Naionalisation of Banks: An Outstanding Intervention

Though I appreciate (and largely agree with) the sentiments expressed by the author in this piece, I also believe one needs to rise above sentimentality when one makes a case against privatisation in today’s day and age. Agreed that nationalisation of certain entities and PSUs being set up in sector sectors did serve its purpose, I think the argument should be about why there is a move towards privatisation (the motive behind it – raising funds for the exchequer, optics etc) over and above allegations of furthering interests of certain business houses and what the state stands to lose and gain when it privatises certain entities. There are regulatory agencies in place to prevent exploitation of the common masses, hence, a generalised statement citing concerns of price hikes and inequality could be made more nuanced especially in the Covid era to re-emphasise the crucial role played by entities that don’t solely function with a profit motive. This is not a recent debate, but I believe it needs to be fought citing credible economic theories to call out the the pro-privatisation camp on their propaganda.